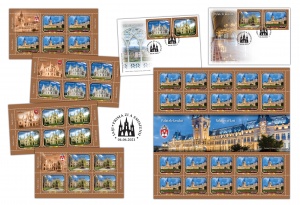 Romfilatelia introduces into circulation, on Friday, June 4th this year, a new postage stamp issue dedicated to the valuable architectural patrimony of the city and county of Iasi: Palaces of Iasi.

The stamps of the issue illustrate four exceptional architectural monuments: Roznovanu Palace in Iasi, Cuza Palace in Ruginoasa, Sturdza Palace in Miclauseni and the Palace of Culture in Iasi.

On the stamp with the face value of Lei 1.70 is represented the Rosetti-Roznovanu Palace in Iasi, where the current headquarters of Iasi City Hall is located. The building dates back to the end of the 18th century, but underwent several transformations, acquiring the current appearance at the end of the 19th century.

In the 18th century, there was a house of Matei Cantacuzino on this place. In 1832, the great vistiernic (treasurer) Iordache Roset Roznovanu rebuilt the edifice in a sumptuous style marked by Neoclassicism. In 1891, the Palace was bought from Nicolae Rosetti-Roznovanu, to serve as the headquarters of the City Hall of Iasi, but in 1893, it was taken over by the State and rearranged as a residence for Crown Prince Ferdinand. Overall, the palace, in its current shape, belongs to the Neoclassical style, with Eclectic-Baroque ornamental elements.

The building played a special role during the World War I, between 1916 and 1918, when it hosted the headquarters of some institutions of political leadership who had taken refuge from Bucharest. In 1970, the City Hall of Iasi returned definitively to its old location, where it still operates at present.

On the stamp with the face value of Lei 2 is illustrated the “Al. I. Cuza” Palace in Ruginoasa, built at the beginning of the 19th century.

The Ruginoasa Estate originally belonged to the Sturdza family. In 1804, the great vistiernic (treasurer) Sandulache Sturdza hired a Viennese architect to rebuild the old mansion in Ruginoasa. The works were completed in 1814. Around the house, rebuilt in Neoclassical style – and which now deserves its name as a palace -, a park was arranged.

Logofat (Chancellor) Costache Sturdza, Sandulache’s son, however, wanted a different residence. The building was remade in the neo-Gothic style, as it is today. In 1857, Costache’s son, vornic (steward) Alexandru Sturdza, mortgaged the estate and the palace, but he could not pay the loan instalments, so the National Bank of Moldavia put the estate up for auction.

It was bought in 1862 by Prince Alexandru Ioan Cuza, who wanted to turn it into a summer residence. The ruler spent little time at Ruginoasa; instead, his wife, Lady Elena Cuza, lived here, arranging the interior (with precious furniture, wallpapers and decorative objects, many brought from France), as well as rebuilding the park.

During the World War I, the Palace in Ruginoasa served as a military hospital. In 1936, it became the property of the Romanian Railway Administration, which set up a tuberculosis hospital there.

Already degraded by its use as a hospital, the building was severely damaged during World War. It was partially rebuilt between 1967 and 1978, and in 1982 it became the “Al. I. Cuza” Memorial Museum, in its patrimony being included a number of pieces that had belonged to the Cuza family. At present, the building and the surrounding park are a museum attraction subordinated to “Moldova” National Museum Complex of Iasi.

On the stamp with a face value of Lei 5.50 is represented the Sturdza Palace in Miclauseni, built between 1880 and 1904 by George A. Sturdza and his wife Maria, on the site of an old mansion dating back to 1755. Currently, it is owned by the Metropolitanate of Moldavia and Bukovina.

However, the story of the castle begins around 1410, when vornic (steward) Miclaus received from the ruler Alexander the Good (1400-1432) a manor, which would remain known as Miclauseni. In 1591, the descendants of the vornic Miclaus sold the estate, and the new landlord, the vistiernic (treasurer) Simion Stroici built a mansion here, at the beginning of the 17th century. His heirs left the estate to some of their relatives, Ioan and Sandu Sturdza. In 1752, vornic (steward) Ioan Sturdza rebuilt the mansion, transforming it into a spacious building, with twenty rooms. His grandson Alecu arranged an English park around the mansion and enriched the library by rare books and manuscripts, and between 1880 and 1904, Alecu’s son, George Sturdza, built a palace in late neo-Gothic style on the site of the former mansion, remarkable both by the imposing elegance of the exterior and the the richness of the interior decor and collections: marble stairs, inlaid wood floors, paintings and sculptures, medieval weapons and costumes, silverware, medals and coins, as well as tens of thousands books, many of them valuable because of their rarity or antiquity.

George Sturdza’s daughter, Ecaterina, took care of the administration of the castle for a long time. Towards the end of her life, she became a nun and donated the estate to the Diocese of Roman, which founded a monastery here. In 1953, the estate was nationalized and had, over time, various intended uses – explosives depot, a school for children with special needs and foster care centre for children, among them.

After decades of neglect and misuse, the building was returned to the Metropolitanate of Moldavia and Bukovina, which made it possible to carry out emergency repairs and, since 2004, a major restoration. At present, Sturdza Palace and its outbuildings can be visited and house an event centre, accommodation rooms and restaurant; the palace thus became again the elegant and welcoming building that was in the days of its former glory.

The stamp with the face value of Lei 19.50 illustrates the Palace of Culture in Iasi, initially the Administrative and Justice Palace, at present the headquarters of “Moldova” National Museum Complex.

The Palace of Culture is an iconic building of the city, built between 1906 and 1925, according to the plans of the architect I.D. Berindei. The building strongly marked the architecture of the old seat of Moldavia, imposing itself since its coming upon the city landscape, by its monumental size.

In its appearance there is a successful combination of architectural styles: neo-Gothic, romantic and neo-Baroque. The entrance to the palace is made through an imposing tower, 55 m high, having as a distinctive element a clock with three dials.

In 1955, the old Palace of Justice became the Palace of Culture, hosting representative cultural institutions of the country, reunited at present under the name of the “Moldova” National Museum Complex in Iasi.

The building has 298 rooms, with an area of approximately 36,000 m2. Two of the most famous rooms are the Voivodes’ Hall (which owes its name to a gallery of portraits of the rulers of Moldavia) and “Henri Coandă” Hall (decorated with splendid stuccoworks). Details from the two rooms are illustrated on the two “first day” covers of the postage stamp issue.

Romfilatelia thanks Iasi Mayor’s Office, dr. Sorin Iftimi at the Museum of History of Moldova within the “Moldova” National Museum Complex in Iasi and the Metropolitanate of Moldavia and Bukovina for the documentary support provided to the development of this postage stamps issue. 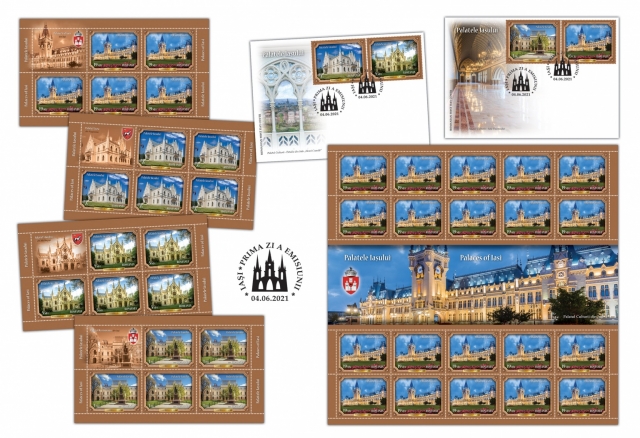 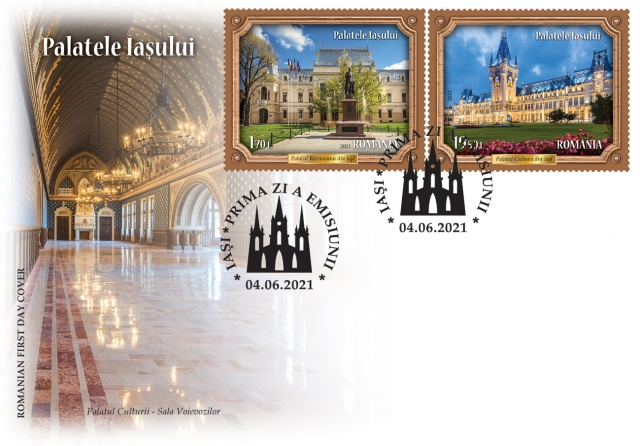 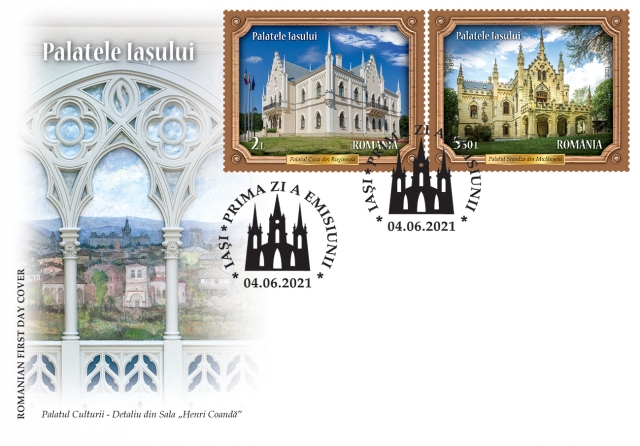 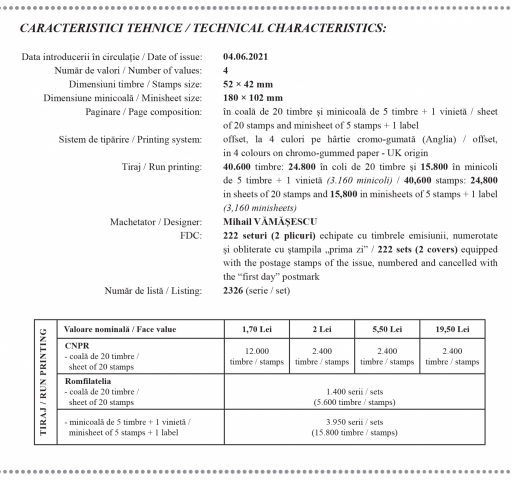 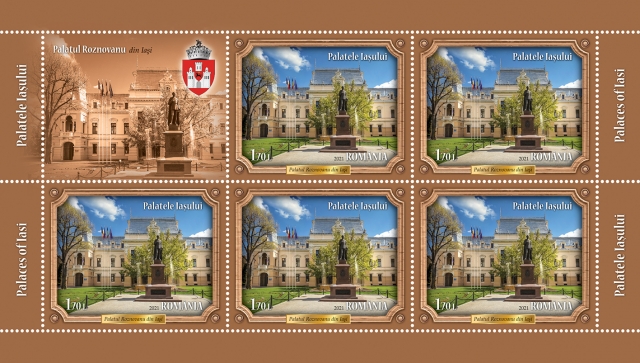 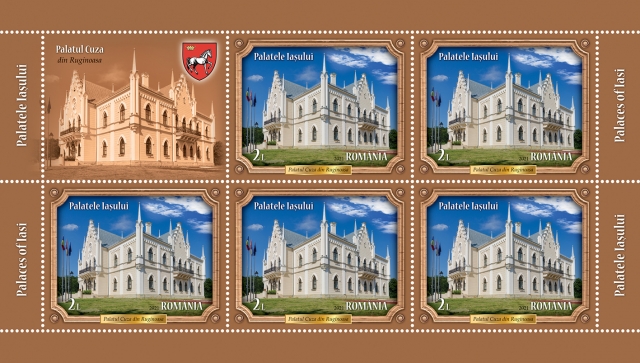 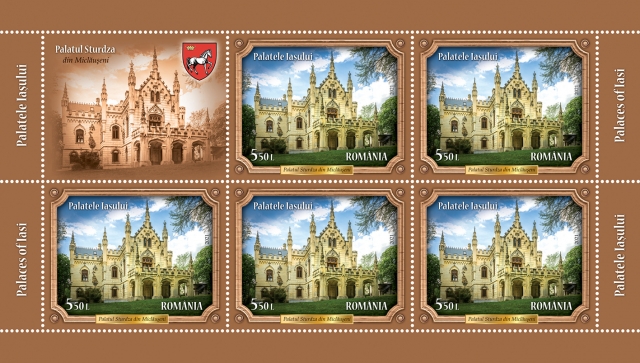 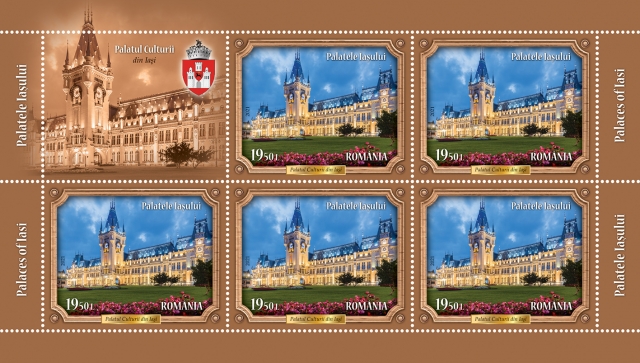 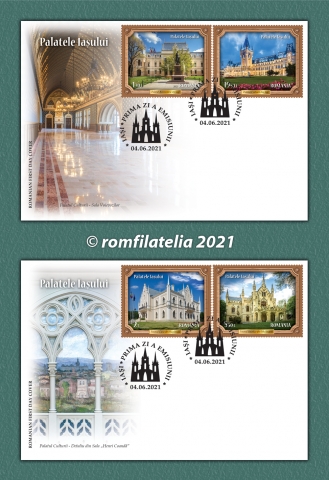 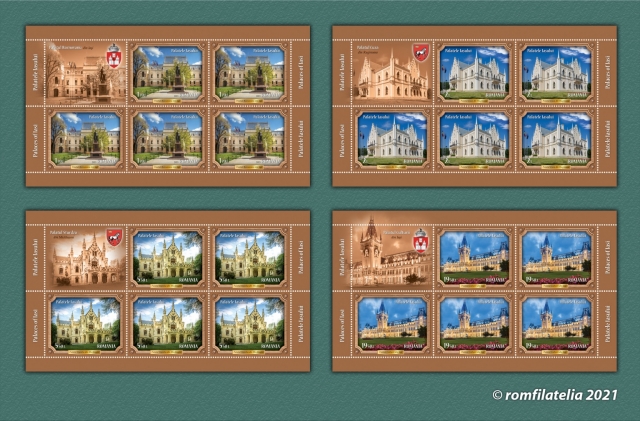 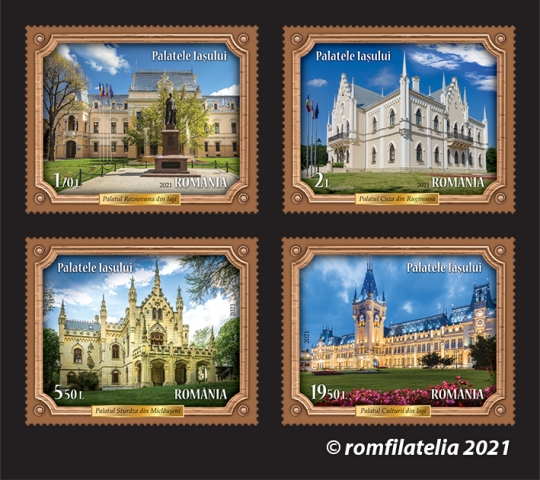 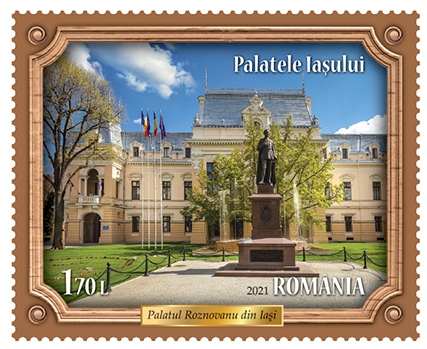 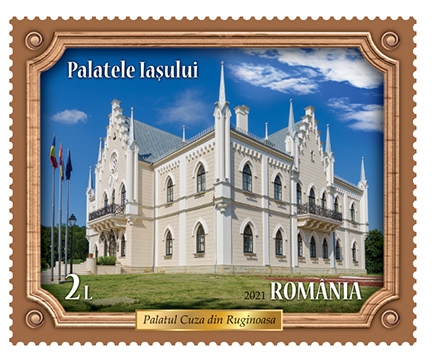 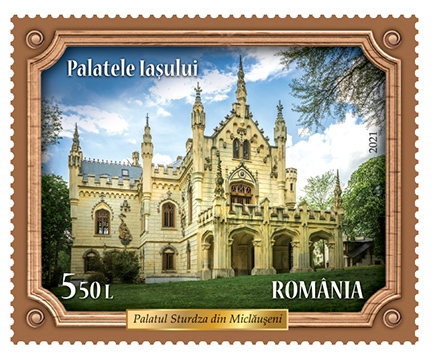 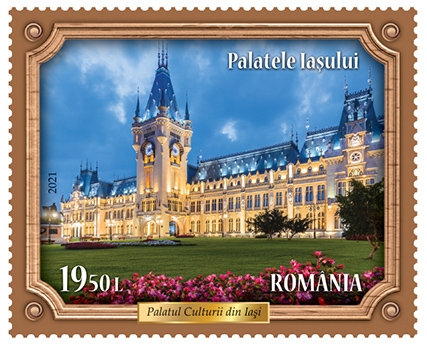