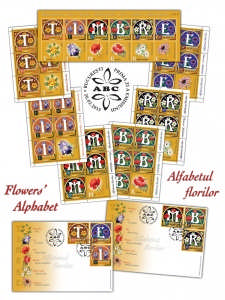 The 6 stamps of the project bring together the traditional philatelic topic of “flora” and the graphic concept of a head letter or initial, an uppercase letter, usually ornate, used at the beginning of chapters in bibliophile editions. Each stamp depicts one such head letter intertwined with a flower, the flower’s name starting with the letter portrayed on the initial, and thus the entire issue forming the word “TIMBRE” (the Romanian word for “stamps”).

Among the flowers and letters which can be found on the issue’s stamps we mention:

– The stamp with the face value of lei 3.00 illustrates the letter T of „Trandafir” (the Romanian word for rose – lat. Rosa), a flower cultivated in numerous species and varieties, whose long cultural history has led to its use as a universal symbol of love and beauty;

– The stamp with the face value of lei 3.10 presents the letter I of „Iris” (lat. Iris sibirica), a perennial plant, in the form of small shrubs, with flowers of different colours and shades, the Greeks naming it after the word rainbow;

– The stamp with the face value of lei 3.30 depicts the letter M for „Mac” (the Romanian word for poppy – lat. Papaver rhoeas), an annual herbaceous plant, used in the past in medicine, as a mild sedative, today being widely cultivated for its seeds used in food pharmaceutical industry or as a decorative plant;

– The stamp with the face value of lei 4.30 illustrates the letter B of „Begonia” (lat. Begonia x tuberhybrida), a herbaceous and perennial plant, native to tropical and subtropical areas with humid climates, whose large flowers of various colours are classified by their shape into spherical, daffodil, camellia, rose, peony type, etc.;

– The stamp with the face value of lei 4.70 presents the letter R of „Regina noptii” (the Romanian word for Flowering tobacco – lat. Nicotiana alata), a herbaceous, perennial plant, cultivated annually due to its low resistance, which blooms in late summer, from July to October. The flowering tobacco is widespread as an ornamental plant in temperate regions;

– The stamp with the face value of lei 14.50 illustrates the letter E of „Echinacea” (lat. Echinacea purpurea), known also as the ”evening sun”, whose extract is considered a stimulant for the immune system.

The issue is completed by a set of 2 first day covers, and as page composition were used the sheet of 28 stamps, the minisheet of 5 stamps + 1 label and the block of 6 stamps + 6 TABS, a special product whose imagine reveals the word “TIMBRE” (the Romanian word for “stamps”).

Starting with Friday, February 20th, 2015, the postage stamp issue Flowers’ alphabet will be available in all Romfilatelia shops in Bucharest and countrywide.

Romfilatelia thanks the Romanian Academy Institute of Biology for the documentary support granted in the accomplishment of this postage stamp issue.