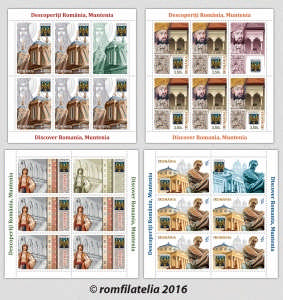 Wallachia proper is a historical region of Romania made up of Muntenia (known as Greater Wallachia) and Oltenia (or Lesser Wallachia).

Wallachia has as its birth record a decisive battle of the Wallachian Prince Basarab I and the King of Hungary, Charles Robert, a battle in which victory went to the Wallachians in the confrontation of Posada. The year inscribed in the pages of history: 1330.

The philatelic series Discover Romania, dedicated this year to Muntenia, brings together historic treasures and representative personalities of the area.

We invite you to join us on a journey back in time, bringing fragments of Muntenia’s history!

The Ottoman expansion in the Balkans culminating in the occupation of Constantinople in 1453, put Muntenia in an unsafe situation. For strategic reasons, several Wallachian rulers preferred to have their courtly residences in the Sub-Carpathian settlements of Campulung, Curtea de Arges or Targoviste, until the middle of the 17th century.

Reminiscent of the Royal Court of Targoviste, it should be noted that it is the best preserved medieval auditorium ensemble in Romania. The nucleus of the Princely Court is exposed to the view of visitors today; it was built in the time of Mircea the Elder (1388 – 1418), meant as overall housing for the royal family, court officials and their servants.

The one who was to make the last significant repair works and extensions to the Royal Court is one that will end the series rulers in Targoviste, Constantin Brancoveanu (1688 – 1714).

At his initiative, the best builders and decorators pooled their talents to define and materialize a renowned art style, Brancovenesc style, a wisely coagulated whole of several styles. The Hurezi Monastery becomes the center of the famous Brancovenesc school of painting and sculpture.

A brave and well know Voivode, Vlad the Impaler (1448, 1456-1462, 1475) establishes his princely court in Bucharest which will see a visible and ­sustainable development in the following centuries.

Bucharest maintains from Constantin Brancoveanu’s reign a number of churches plus the princely palace of Mogosoaia.

History followed its course and in 1859 the union of Wallachia and Moldavia was realized by electing the same ruler Alexandru Ioan Cuza, on January 24th.

In terms of the new state government, the old Muntenia province retains a leading role, the capital being established in Bucharest.

The written history of Wallachia, which began during the reign of Basarab I, took account of a territory between the Carpathians, the Danube, Siret and Milcov rivers. The ruler who followed him after three decades, Mircea the Elder, managed to maintain a recognized position of independence for the territory and also benefit from the largest territory (“up the great sea”).

The stamp with the face value of Lei 2.50 highlights in a suggestive association the majestic silhouette of the Curtea de Arges Monastery and its founder, Neagoe Basarab. Starting with the first couple of King and Queen of Romania, Carol I and Elizabeth, and up to the present, the imposing monastery building watches over the royal family crypts.

The face value of Lei 3.50 belongs to the stamp reminiscent of ruler Constantin Brancoveanu, the Brancovenesc style ornaments present in his foundations.

The stamp with the face value of Lei 8 brings together in a defining composition the beauty of Muntenia’s folk costumes, carpets and decorative motifs, along with the valuable stone decorations of monastery buildings, valuable presences of the country’s history.

The stamp with the face value of Lei 15 illustrates Bucharest in a set of images representative for spirituality, culture through the Romanian Athenaeum, to which is added the statue of the great politician Ion. I.C. Bratianu.

The illustration of the four postage stamps of the issue is completed by region’s heraldry (Muntenia’s coat of arms).

The margin of the issue’s block presents the Chindiei Tower, within the Curtea Domneasca National Museum Complex of Targoviste, in a nocturnal frame.

The First Day Cover refers to the illustration of arhitectural details specific to Stavropoleos Monastery in Bucharest, next to the traditional woman folk costumes of Muntenia.

Romfilatelia thanks the “Curtea Domneasca” National Museum Complex Targoviste and the photographer Valentin Grigore for their support in achieving this postage stamp issue. 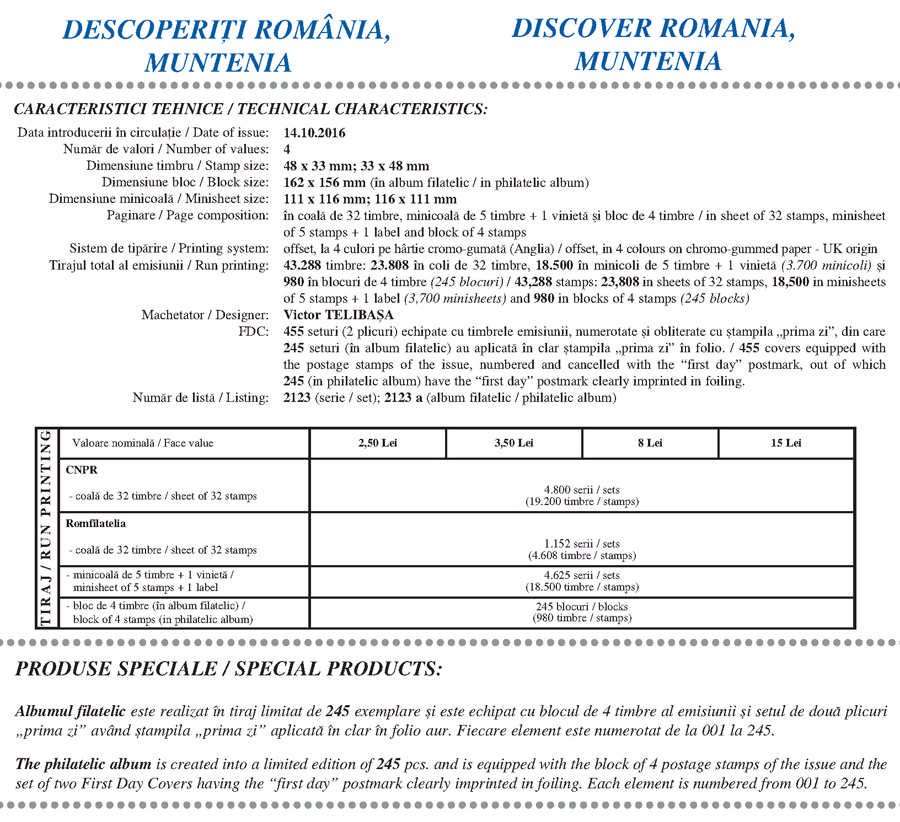