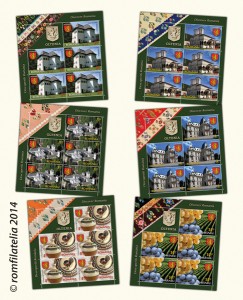 Rooted in the era of the Basarab dynasty (that also gave it the name of The Cradle of the Basarabs), the historic region of Oltenia mirrors the two millennia of the Romanian people’s history. Surrounded by the southern Carpathians and the waters of the Danube and Jiu rivers, Oltenia encompasses Dolj and Gorj Counties, as well as parts of Mehedinti, Olt, Valcea and Teleorman Counties, being endowed with a varied and rich relief made of natural resources and priceless unique traditions.

Romfilatelia continues the philatelic series dedicated to the discovery of Romania (Discover Romania) by introducing into circulation the issue of postage stamps dedicated to the region of Oltenia, a land shaped by the Romanian character and a window towards times long gone.

The medieval architecture of Oltenia is deeply linked to the threat of the Ottomans’ attacks from the south of the Danube. Thus, the number of fortified buildings has increased, namely that of mansions; they were especially built to provide defence in this kind of situations, and were known as “cule”. These are fortified houses, composed of ground floor and 1-2 levels, with thick walls, specific to northern Oltenia. A representative building is Cula Greceanu, depicted on the stamp with the face value of lei 2.40, a building belonging to the Maldaresti Museum Complex in Valcea. The house was built and reworked between the 17th and 18th centuries, passing later in the patrimony of Greceanu family in the 19th century. Cula Greceanu has three levels, being made of a basement (partially located under the tower), a loggia and other living rooms that can be found on the second floor), and the tower.

Another architectural jewel that honours Oltenia is the Art Museum of Craiova, inaugurated in 1954 in a sumptuous palace that belonged to one of the richest Romanians, Jean Mihail. It is illustrated on the stamp with the face value of lei 3.00. Designed in the style of the French Academicism by the French architect Paul Gottereau, the building was erected in the early 20th century with precious materials: Carrara marble, Murano glass, Venetian mirrors, the walls being upholstered with silk from Lyon. The palace impresses both through workmanship, and the elegance and good taste with which it was decorated inside, being considered one of the most important monuments of civil architecture from the beginning of the last century.

Since the Middle Ages, monasticism and Orthodoxy, which are closely linked to the country’s history, have been a constant presence on the land of Oltenia, the region boasting places of worship which profess not only the deep faith of the Romanian spirit, but also the combination of sacred and secular through architectural church ensembles, some of which became part of the UNESCO heritage.

Tismana Monastery, illustrated on the postage stamp with the face value of lei 3.30, is one of the oldest and largest monastic settlements in Wallachia. Its building started during the reign of Radu I (1377-1383), Matei Basarab adding some elements between 1646-1651. It also fulfilled the role of a fortress, the monastery being equipped with towers and used as a defence building by Tudor Vladimirescu in 1821. In Romania’s history, Tismana is also known as the place where the national treasure, held by the National Bank of Romania, was hidden between 1944 and 1947, to be protected from being confiscated by the German army in Romania or by the Red Army that had approached dangerously the eastern border in 1944. The museum, set up in 2013, provides all the information on how over 200 tonnes of gold were saved.

In 1685, the high spatharios Constantin Brancoveanu buys the estate of the Romani village and shortly after becoming the ruler of Wallachia, in 1690, begins the construction of an important monastic settlement within the perimeter of the village, which became the Hurezi Monastery. The Hurezi Monastery is illustrated on the postage stamp with the face value lei 4.30. The large church of Hurezi is surrounded by a three-sided building ensemble that has been shaped according to the needs and requirements of a royal residence until the tragic death of its founder in 1714. The Hurezi Monastery, the most beautiful Brancovenesc foundation, the most complete and complex monastic settlement in our country, remains a jewel of the Brancovenesc style and a leading carrier of the Romanian people’s history and spirituality.

Besides the Brancovenesc Monastery of Horezu, Oltenia boasts another element entered into the UNESCO Intangible Cultural Heritage: the Horezu ceramics represented on the postage stamp with the face value of lei 4.50. The technique and craft of the Horezu pottery are characterized by uniqueness and continuity found in a tradition kept for centuries in Oltenia. The shapes and colours of ceramics, as well as the associated symbols refer to values and ancestral life customs having belonged to the Romanian people overtime. Traditional pottery is officially celebrated and promoted each year at the Fair of Traditional Romanian Ceramics: “The Horezu Rooster”.

The Oltenia region lures travellers with the flavour of its wines, the varieties of the Dragasani region having gained international recognition by being awarded numerous medals in world competitions and exhibitions. The postage stamp with the face value of lei 14.50 illustrates Cramposie Selectionata and Negru de Dragasani, selected varieties of grapes that highlight the quality of “terroir” of vineyards from Oltenia. Cramposia Selectionata was obtained in 1972 from the old variety Cramposie (Carloganca),resulting a dry wine, full of ripe fruit aroma and flavour. Negru de Dragasani, produced by crossing the varieties of Negru Vartos and Saperavi, gives dry wines, harsh, of a striking red, with complex flavours. Oltenia’s wines were prominent on the table of Romania’s rulers, the Dragasani Vineyard being otherwise called “the princely vineyard of the Bans of Oltenia” (I.C. Teodorescu).

Romfilatelia thanks the Art Muzeum of Craiova, the Oltenia Muzeum of Craiova, the Aurelian Sacerdoteanu – Valcea County Muzeum, the Dragasani Wine and Vineyards Research and Development Institute, Mr. Radu Tudor Tiron, heraldist artist and the photographers George Avanu and Lucian Tudose for the documentary and photographic support granted in the accomplishment of this issue of postage stamps. 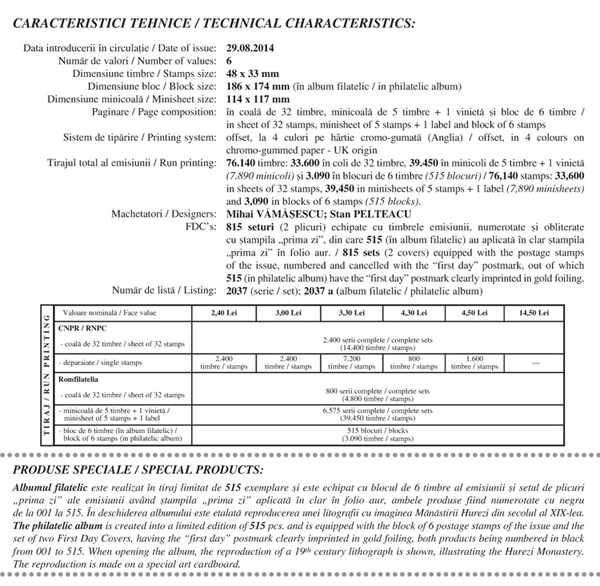