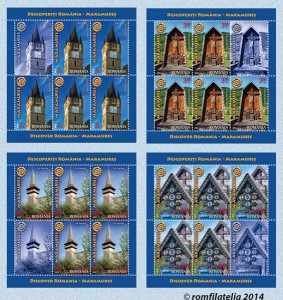 Dear traveller, if only for a moment your heart has dreamt about you becoming a character from a Romanian timeless story, then visit the County of Maramures, and spend sometime on these lands where the beauty of artistically shaped wood, the picturesque landscapes and the folklore combine with people’s simplicity and kindness.

Located in Northwest Romania,MaramuresCountyis a geographical and ethno-cultural region spread on a 6,304 km2 area, being bordered by the counties ofSatu-Marein the West, Salaj, Cluj and Bistrita-Nasaud in the South, Suceava in the East, and the Ukrainian state in the North.

TheMaramuresCountyis a unique destination, located in the heartland ofEurope, which carefully preserved the peasant’s everlasting culture, traditions and lifestyle. Few are those traditions that changed over centuries. Crafts and traditions are still transmitted from generation to generation, while hand-woven clothing continues to be proudly worn, the church still being the soul of the village community.

More than in other regions of the country, inMaramuresCountythe art of woodcraft has being flourishing. For this place, the wood has always symbolized heat, shelter and tools. It was, and still is, the ideal tool for the manifestation of the local people’s artistic genius.

One of the first artistic manifestations of the people living in this region, for which they used the wood, was sculpture. Although unknown to many people, the civilization of wood in Maramures is made of some essential elements: the church, the house made of wood and its annexes, the traditional technical installations, the gate and the roadside cross.

One of the most important symbols born within the sphere of the Primordial Tradition, that was preserved in Maramures County, is the Dacian knot, in all its forms, made of different materials and representations in space, plan or embossed, depicted on rugs, wood or ceramics.

Continuing the philatelic project Discover Romania, Romfilatelia introduces into circulation the issue of postage stamps dedicated toMaramuresCounty that, just as a hidden treasure, awaits every moment to be discovered.

Stephen’s Tower, depicted on the postage stamp with the face value of lei 2.00, represents the bell tower which had been initially built for Saint Stephen’s church in Baia Mare. The first documentary attestation of the church goes back to 1347, but it’s only in 1387 that the building is officially inaugurated. The tower, built of massive stone, was the result of an initiative of Prince Iancu de Hunedoara to mark the victory of Ialomita, against the Ottomans (1442). The construction of the tower starts after 1446, being finished in 1468 under the reign of Matthias Corvinus.

In 1619, the upper structure is rebuilt, in the shape of a square-based pyramid, having four towers and bells. Nine years later, a clock with moon is added. Repeatedly devastated by storms and fires, the two buildings underwent many serious reparation works, but only the tower is rebuilt in 1763. On this occasion, it is built the upper-side porch.

Berbesti roadside cross, depicted on the postage stamp with the face value of lei 3.30, dates back to the 18th century and is the oldest border cross inMaramuresCounty. It was built at the expense of the Rednic noble family in Berbesti in the first part of the 18th century, its component elements and sculptural approach registering this unique monument in the Gothic style.

Just as the great historian Nicolae Iorga said, the Roadside crosss of Redniceni family was “built by an inmate, in times long past” and placed insuch a way that through it, God could watch and bless the entire village

Boundary crosses, besides their religious symbol, had meanings connected to beliefs and superstitions much older and rooted in the Romanians’ subconscious. These were usually located at intersections and crossroads, where evil spirits were believed to have greater powers and the ability of overpowering the travellers.

„When you pass by a roadside cross and worship it, a feeling of closeness embraces you, a special kind of energy attracts the soul, providing comfort and peace” (Archimandrite Ioachim Parvulescu, 2004). According to other researchers, the roadside crosses in Maramures seem to be the last relics of the Dacian crosses.

On the postage stamp with the face value of lei 8.10 is depicted the Wooden Church in the Sugatag Village, in Ocna Sugatag. The settlement was built in 1642, being dedicated to the “Pious Paraschiva”. It was built of oak wood, on the same place of an older church, being however painted much later, most probably in 1753, year marked in the nave.

The place of worship respects the typology of wooden churches found inMaramuresCounty, having characteristic elements such as: the nave and the narthex have double eaves, the turret tower is built outside the base profile, and the roof has eight simple arcades. The motif of the “twisted rope” enlacing the walls outside the church can also be found on the frame of the door.

Fragments of the interior painting are still preserved in the nave and the altar. The dedication icon “the Pious Paraschiva” is one of the icons that have been preserved, this one being realized, signed and dated by the painter Visovan Gheorghe in 1785. From 1969 to 1970, the monument was repaired by the Office of Historical Monuments, and in 1994 it was covered again with oak shingle, by a team of local craftsmen.

The postage stamp with the face value of lei 14.50 is dedicated to the Merry Cemetery in Sapanta, a true open-air museum and particular archive that keeps carved on wood the villagers’ life stories.

The legend says that the merry attitude towards death is a Dacians’ habit who believed in eternal life, death being for them only the passage to another world.

Somewhere in 1935, Stan Ion Patras, then an anonymous wood sculptor, being talented for writing poems, carved the first verse of an epitaph on a cross in the cemetery. Since then, the local people’s life has become immortal, being preserved with the help of the chisel on the wooden crosses in the cemetery.

The crosses are made of oak wood, which is manually carved after being cut and dried. In the upper side of every cross, there is a bas-relief depicting a scene from the life of the deceased. The scenes are simple, naive, but bring back from the past the villagers’ life, showing a relevant aspect from everyone’s life.

After the cross is carved, a blue background is usually painted on it, the so-called Sapanta blue colour. And to make it merry, this place needed to be a show of colours. The scenes are painted using vibrant colours: yellow, red, white and green.

Romfilatelia thanks the Maramures Office of Culture, Cults and National Cultural Heritage, and the Maramures Village Museum in Sighetu Marmatiei for the documentary support granted in the accomplishment of this issue of postage stamps. We also thank craftsman Dumitru Pop-Tincu, Stan Ion Patras’ successor, the founder of the Merry Cemetery in Sapanta. 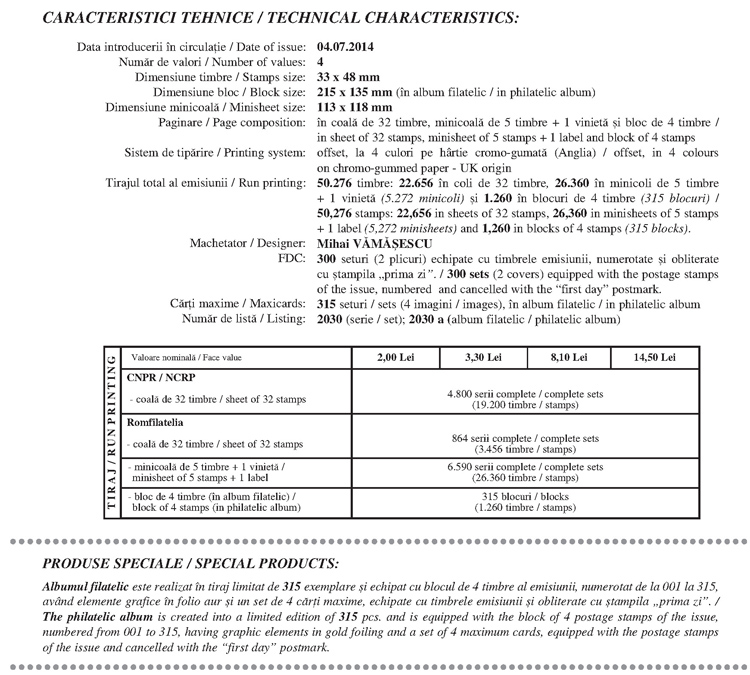