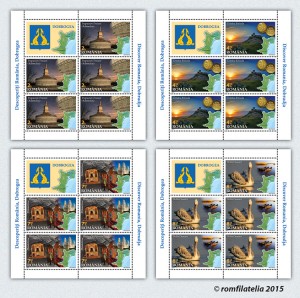 Romfilatelia, continuing the ample project of promoting the heritage of each region of the country, introduces into circulation the postage stamp issue Discover Romania, Dobrudja.
Situated in the south of Constanta county, on the territory of the Adamclisi village, the Tropaeum Traiani citadel exhibits to the viewer the famous triumphal monument of the same name, illustrated on the stamp with the face value of lei 2.00.
In spite of the passing of time and the events that led to the abandonment of the Tropaeum Traiani citadel, the triumphal monument still retains to this day 48 whole metopes and 5 in a fragmented state (out of the 54 initial metopes). These were sculpted in the bas-relief technique, with scenes of the war of the Romans against the Dacians, together with their allies.
The ruins of the medieval fortress Enisala, illustrated on the stamp with the face value of lei 4.70 (known under various names during its existence such as Enisala, Eni?ala, Heraclee, Heraclia) monitor the lake area of Razim and Babadag.
The fortress is 2 km from the town of Enisala, on top of a limestone hilltop. It was built in the second half of the 14th century by an authority that had in mind the control of the area of the Danubes branches. Based on the construction techniques, on the archeological materials and the historical realities the hypothesis was emitted that the only ones interested in the construction of a citadel integrated into the fortification system of Northern Dobrudja, were the Genovese merchants.
The materials discovered during the archaeological investigations, especially Byzantine, Genovese, Tatar, Moldavian, Wallachian or Turkish coins attest the long and intense work of living and the commercial activities of the citys residents.
Dobrudja is itself a land filled with spirituality, Saint Apostle Andrews Cave, illustrated on the stamp with the face value of lei 7.60, being a place of major importance for Romanian Christianity. The legend of Saint Andrew shows how the Apostle reached the lands of our ancestors, preaching the holy word, and was received and hosted in the grotto venerated by Christians today.
Nowadays, Saint Apostle Andrews Cave is an important pilgrimage place on the map of the Christian Dobrudja. Next to it other buildings serving the monastery have appeared like a new and roomy church and the row of cells.
In a beneficial combination with the valuable landmarks of Dobrudjas historic past, one can find natural wealth, the internationally recognized Danube Delta.
The Danube Delta, illustrated on the stamp with the face value of lei 8.10, was formed roughly 6,500 years ago, when a cove in the Black Sea started filling up with soil carried by rivers. During our times it is the second largest wetland in Europe and here one can find the newest Romanian land, the Danube bringing in silt from its long journey and augmenting the surface of the delta with an accretion rate of 17 m per year.
This is the place where millions of birds from different corners of the Earth (Europe, Asia, Africa and the Mediterranean Sea) come to nest. Most species of freshwater fish that exist in Europe are found in the delta, a fact which attracts an impressive population of pelicans.
The central role that the Danube plays in the life cycle of many species, being a critical refuge for globally endangered birds, makes this biome a unique one in the world, onto which international conservation efforts have been focused, the delta being declared a Biosphere Reservation.
Dobrudja presents itself as a land of contrasts, where civilization is intertwined with nature, and the two find a delicate balance, where diverse cultures and ethnic groups have combined to create a specific space unique in the world.

Romfilatelia thanks the Gavrila Simion Institute of Eco-Museum Research Centre in Tulcea and photographers George Avanu and Helmut Ignat for the support granted in the achievement of this postage stamp issue. 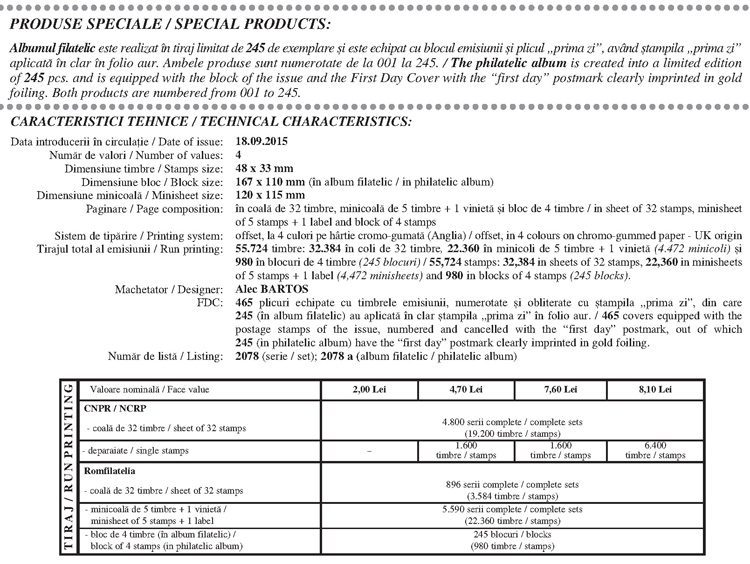