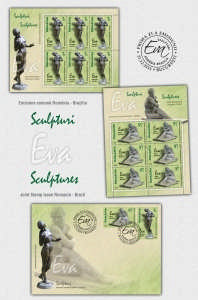 Romfilatelia closes the philatelic year of 2015 with a joint project Romania – Brazil, dedicated to art and implicitly to sculpture, having as theme the female biblical character Eve. The stamp issue comes to strengthen the diplomatic relations with Brazil, established at legation level on January 7th, 1928 and elevated to the rank of embassy on May 9th, 1974, and thus to sustain the cultural, spiritual and economic bridges already existing between the two peoples.

With the title Romania – Brazil, Sculptures: Eve, the postage stamp issue will be available for purchase starting from Monday, December 21st, 2015, in Romfilatelia’s shops in Bucharest, Bacau, Brasov, Cluj-Napoca, Iasi and Timisoara, the two stamps illustrating the works Eve, belonging to Gheorghe Leonida and the Brazilian sculptor Victor Brecheret.

Thus, the postage stamp with the face value of leu 1.00 presents the sculpture Eve, the work of the Romanian sculptor Gheorghe Leonida, which is found in the patrimony of the Romanian National Museum of Art, being displayed on the lawn in front of the former Royal Palace. The young woman’s nude, rendered in a classicizing manner, was captured by the artist in a dynamic pose: the body arched to the right, hand raised to the face and the graceful head, with her hair in a bun, slightly bent over the apple she holds. The sculpture is remarkable for its fineness of execution, rigor of form composition and thoroughness in rendering details.

Gheorghe Leonida also had an important role in the cultural modernization of Brazil, putting its mark on the most famous artistic emblem of the country. He helped create the imposing symbol of Rio de Janeiro, the statue of Christ the Redeemer, having been hired to carve the statue’s face.

On the stamp with the face value of lei 9.10 we find Eve in the vision of the Brazilian sculptor
Victor Brecheret, whose work combines his native country’s modernism, Italy, with visual motifs of Brazilian folk art, many of his subjects being biblical characters or belonging to classical mythology. Acquisitioned by the São Paulo Town Hall in 1921, the sculpture Eve shows the mother of mankind in a dynamic composition, due to the different orientation of the head and torso. Its structure is complex and refined, imbued with strength and drama.

The two stamps of the issue are completed by a first day cover, while as page composition were used the sheet of 32 stamps and the minisheet of 6 stamps with illustrated border.

Romfilatelia thanks the National Art Museum for the support granted in the accomplishment of this postage stamp issue.