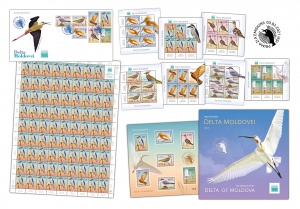 One of the most beautiful and rich natural areas in our country, the so-called Delta of Moldova, includes the Jijia and Miletin Ponds and was recently declared the first Ramsar site in the Region of Moldova (the Ramsar Convention is an intergovernmental treaty on wetlands of international importance especially as waterfowl habitat). It consists of a variety of habitats located in the lower part of the Jijia River, before it empties into the Prut River. Among the wet habitats here, we mention rivers, temporary ponds, reeds, grassy swamps. They are bordered by pastures, brushwood and even predominantly traditionally cultivated arable land. This area of 19,432.5 ha is home to 225 species of birds, of which 140 species nest here, and during migration can provide a resting place for over 40,000 individuals.

The squacco heron (Ardeola ralloides) is illustrated on the postage stamp with the face value of Lei 2.

It is a small-sized species, only 40-50 cm long and 250-400 g in weight. The female resembles the male, with light yellowish plumage on the chest and flanks and darker on the back. The base of the beak turns bluish during the nuptials. The squacco heron nests and feeds in natural, extensive aquatic habitats, with rich vegetation, in low plain or hill areas. It feeds on mollusks (snails, shells) and other aquatic invertebrates, on amphibians or small fish.

The black-crowned night heron (Nycticorax nycticorax) is represented on the postage stamp with the face value of Lei 2.10.

It is a medium-sized species, with a body length of 55-65 cm and a weight of 300-1000 g. The sexes are similar, with a plumage whose colour varies from white-gray to black. On the head it has two elongated white feathers, more obvious during the reproduction period. It nests in colonies located in wetlands, either in high vegetation or in shrubs or trees. It consumes a wide variety of aquatic species, from small fish, amphibians, reptiles, to insects or mollusks.

The ruff (Calidris pugnax) is represented on the postage stamp with the face value of Lei 3.40.

It is a species of wader (shorebird) of medium size, having a length of 23-35 cm and a weight of 90-250 g. Males differ from females, being larger, and their plumage during the nesting period is spectacular, with head tufts and elongated feathers of various colours on the throat and neck.

The diversity of colours is so great that no male is identical with another. The female is smaller, has a duller, light brownish colour, with large black spots.

The northern lapwing (Vanellus vanellus) is illustrated on the postage stamp with the face value of Lei 5.50.

It is a wader (shorebird) of medium size, with a length of 65-75 cm and a weight of 150-300 g. The sexes are similar, presenting a black and white plumage, but with greenish, purple and brownish iridescences. It has a long black crest on its head.

It nests on the ground, predominantly near wetlands, although sometimes even on more remote agricultural land. It feeds on insects, worms and other invertebrates.

The Northern lapwing is experiencing a massive decline in Europe due to the degradation of aquatic habitats, the intensification of agriculture and the access of predators to nesting areas. The biggest problems are the loss of traditional agricultural mosaics and the widespread use of insecticides.

The western marsh harrier (Circus aeruginosus) is illustrated on the postage stamp with the face value of Lei 9.

It is a species of full day bird of prey of medium size, having a length of 45-55 cm and a weight of 500-700 g. The female differs from the male, being dark, having only a white-yellowish head and throat. The male has silver-greyish wings, with black tips and a rusty abdomen. It nests in areas with high grassy vegetation, and the nest placed on the ground is made up of branches, reeds and grass. It is a predatory species; it feeds on birds, small rodents, frogs, insects and, occasionally, cadavers.

The common tern (Sterna hirundo) is represented on the postage stamp with the face value of Lei 10.50.

It is a medium-sized species, 34-37 cm long and weighing 97-146 g. The female resembles the male, with a white chest and abdomen, a grey back and a black head. The only spot of colour is given by the red beak with the black tip, but it disappears in winter, when the beak turns completely black. The entire plumage lightens in winter, the black on the head narrowing to its back.

The little egret (Egretta garzetta) appears on the postage stamp with the face value of Lei 19.50.

It is a small species of heron, with a graceful appearance. The length of the body is only 55-65 cm, and the weight is 350-550 g. The sexes are similar, the plumage is completely white, only the toes are yellow, contrasting with the rest of the legs and the beak, which are black.

The black-winged stilt (Himantopus himantopus) is represented on the First Day Cover of the issue.

It is a bird characteristic of low water areas. It has a length of 33-36 cm and a weight of only 150-200 g. The sexes are similar, have white and black plumage, and the legs and beak are reddish.

It nests in small colonies, located directly on the ground, near wetlands. It feeds on insects, mollusks (snails and shells), crustaceans, spiders, small fish or even seeds.

The philatelic folder is created into a limited run printing of 203 pieces and is equipped with the special block of 7 perforated stamps of the issue with the postmark cleary imprinted gold foiling. The special philatelic block is numbered from 001 to 203.

The postage stamps issue “Delta of Moldova” will be available on Wednesday, February 3rd  2021, in Romfilatelia’s shops network in Bucharest, Bacau, Brasov, Cluj-Napoca, Iasi and Timisoara and online on https://romfilatelia.ro/store/. The postage stamps issue is completed by the “first day” covers,  in sheet of 80 stamps + 1 label, minisheet of 5 stamps + 1 label + tête-bêche and special block of 7 perforated stamps. 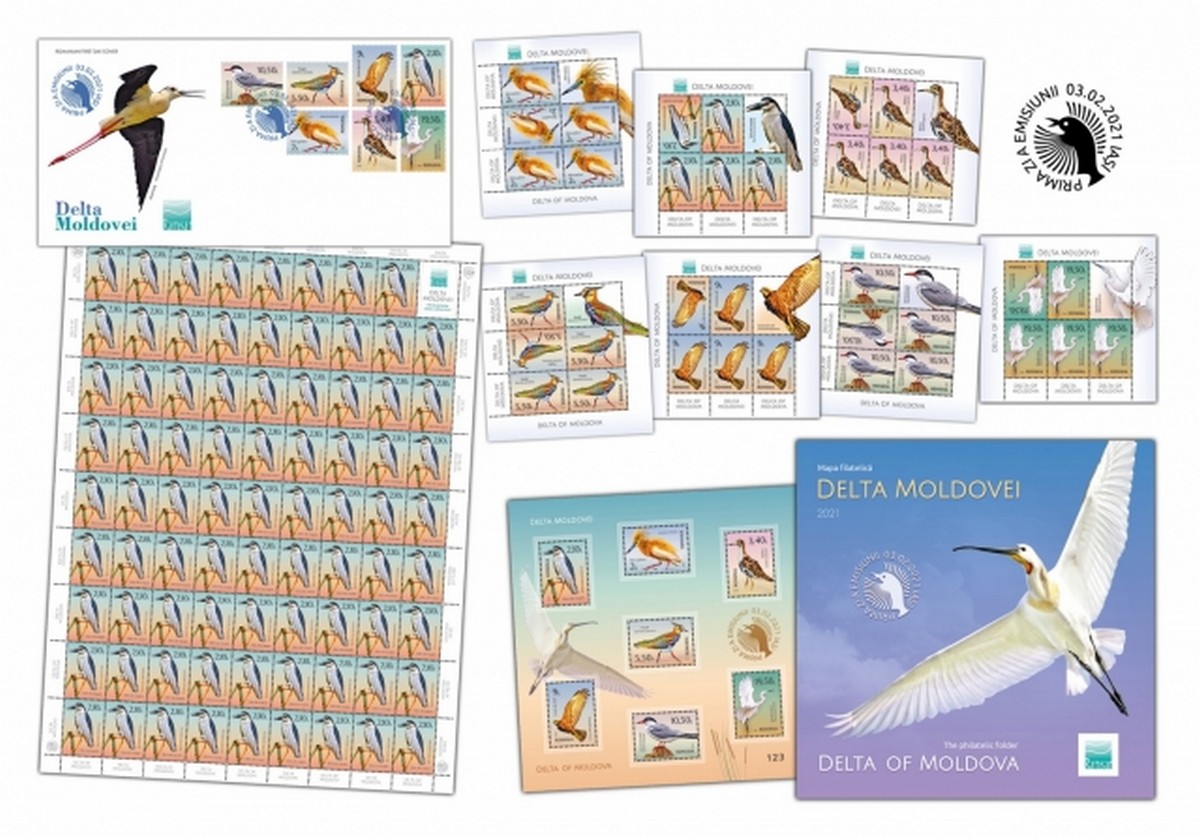 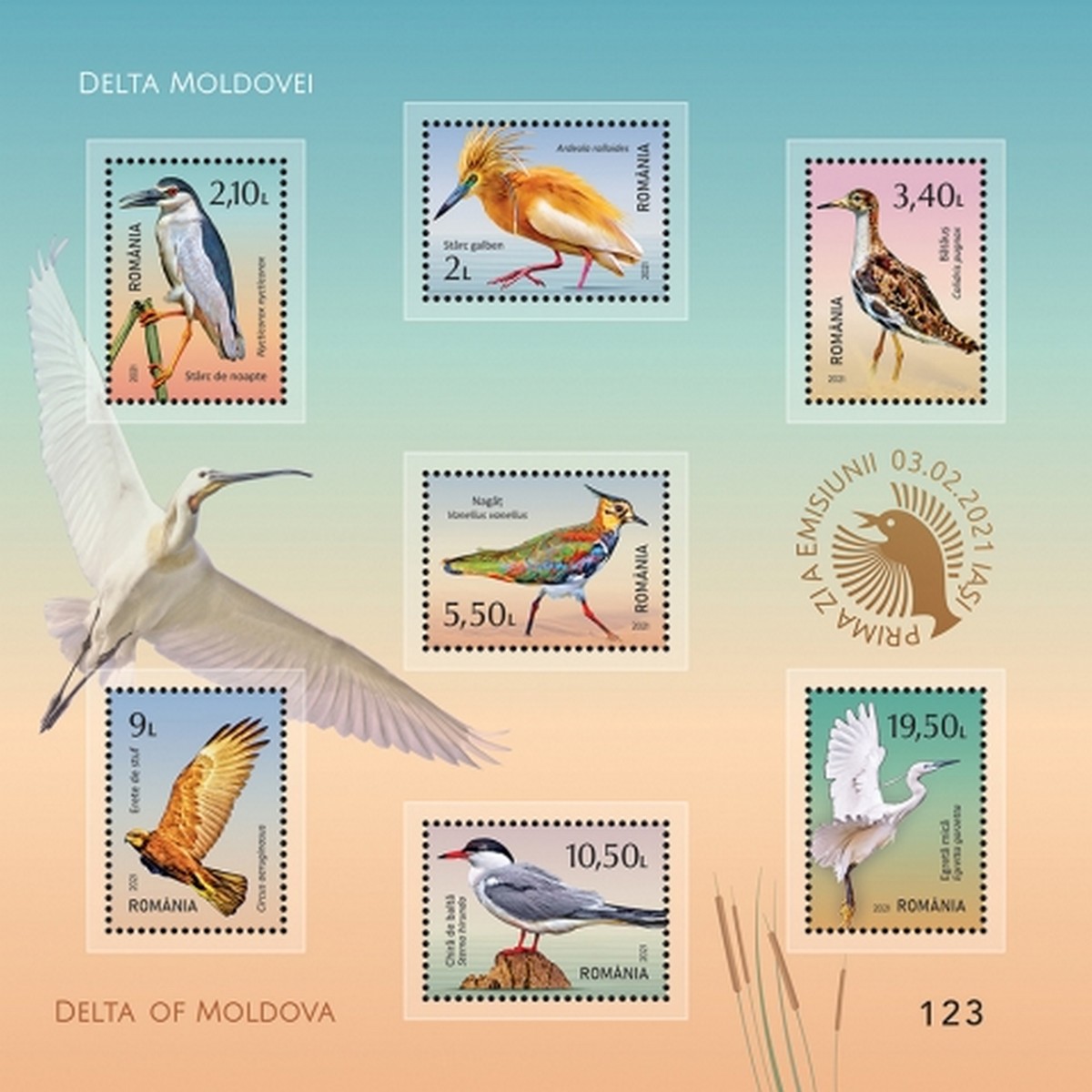 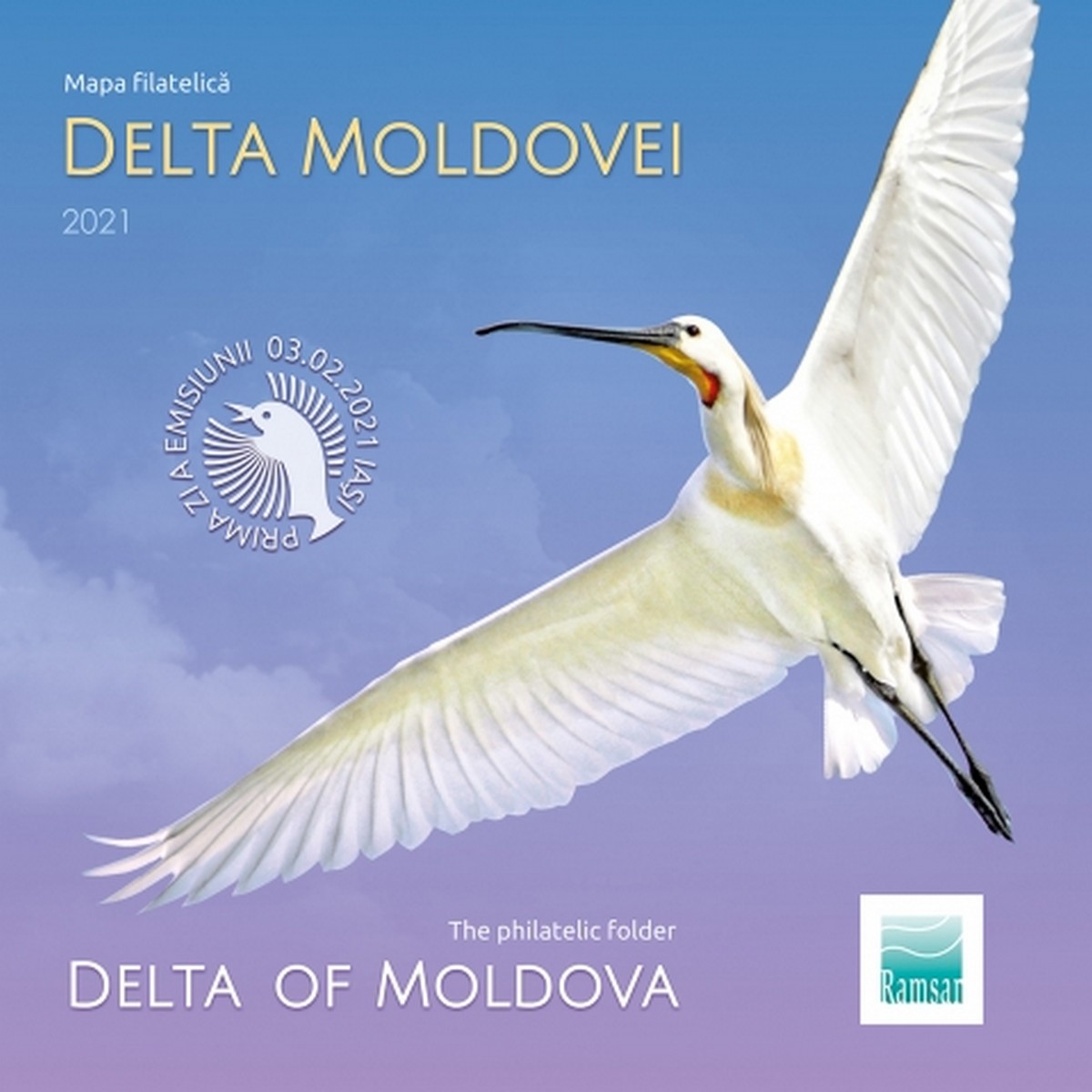 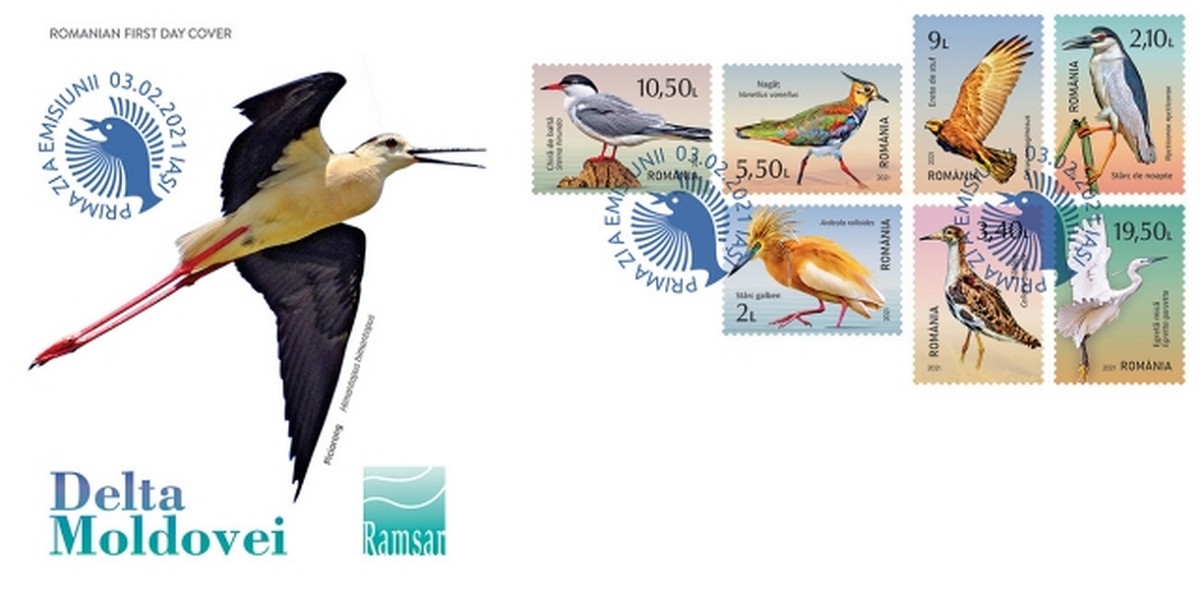 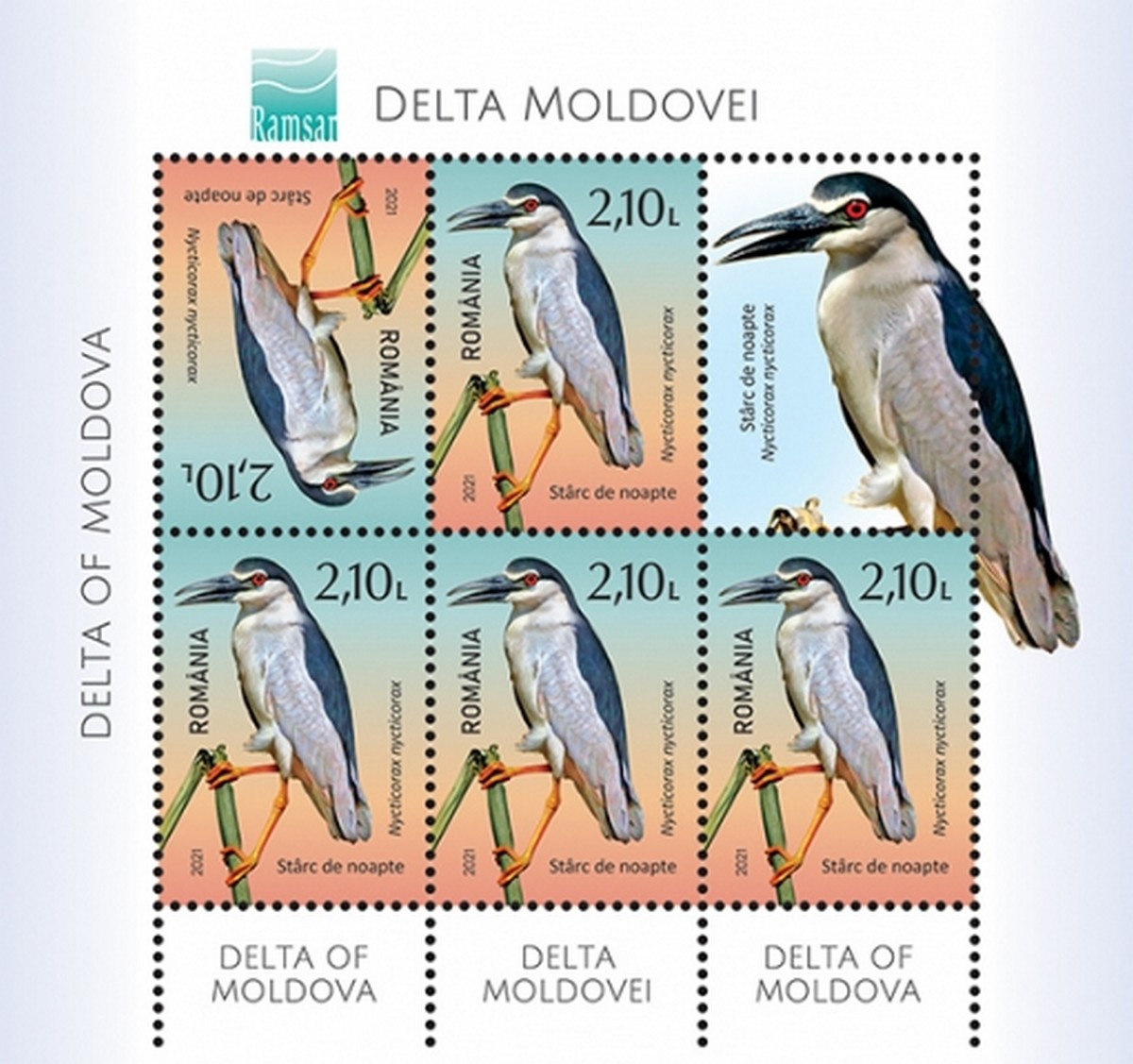 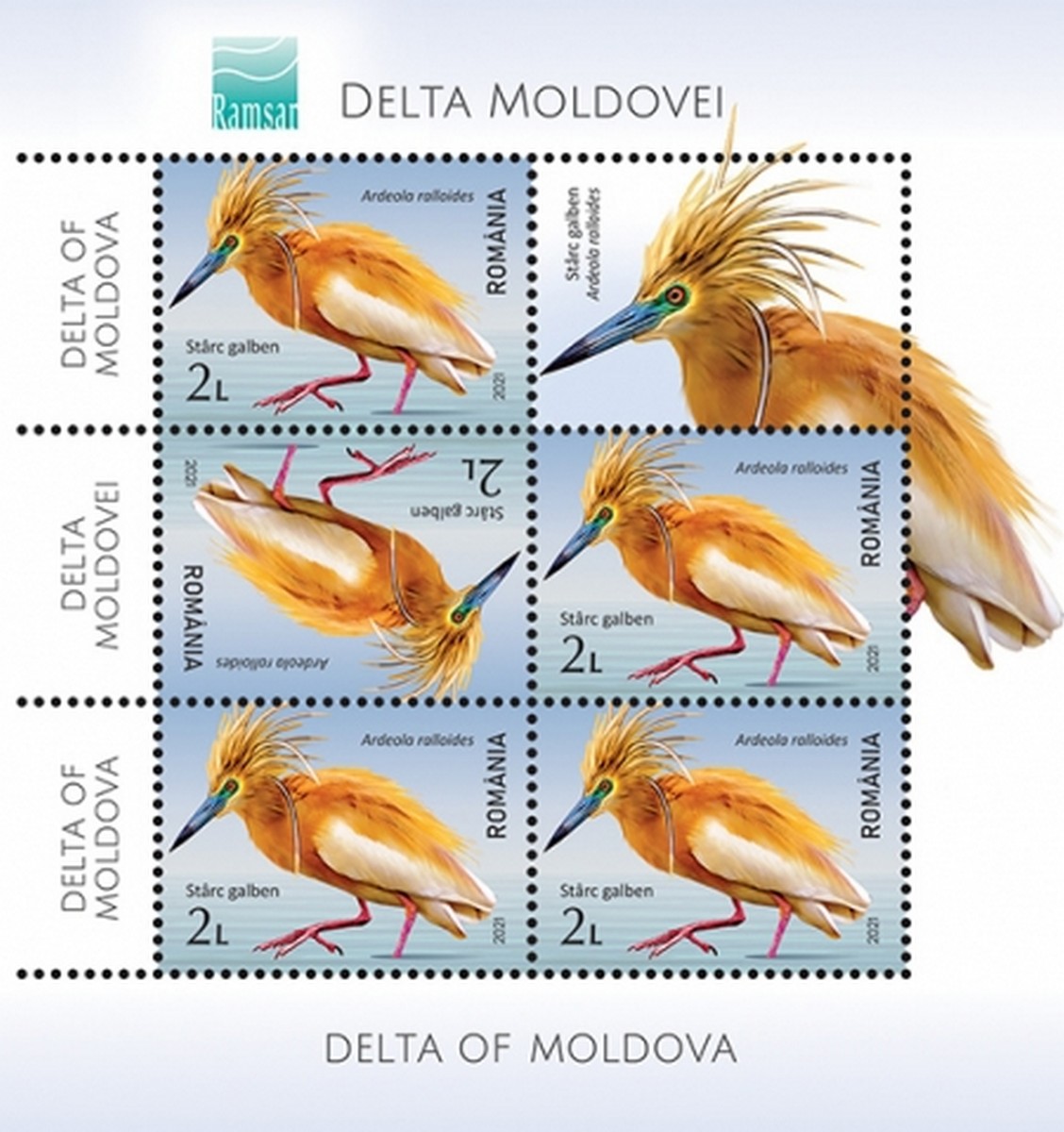 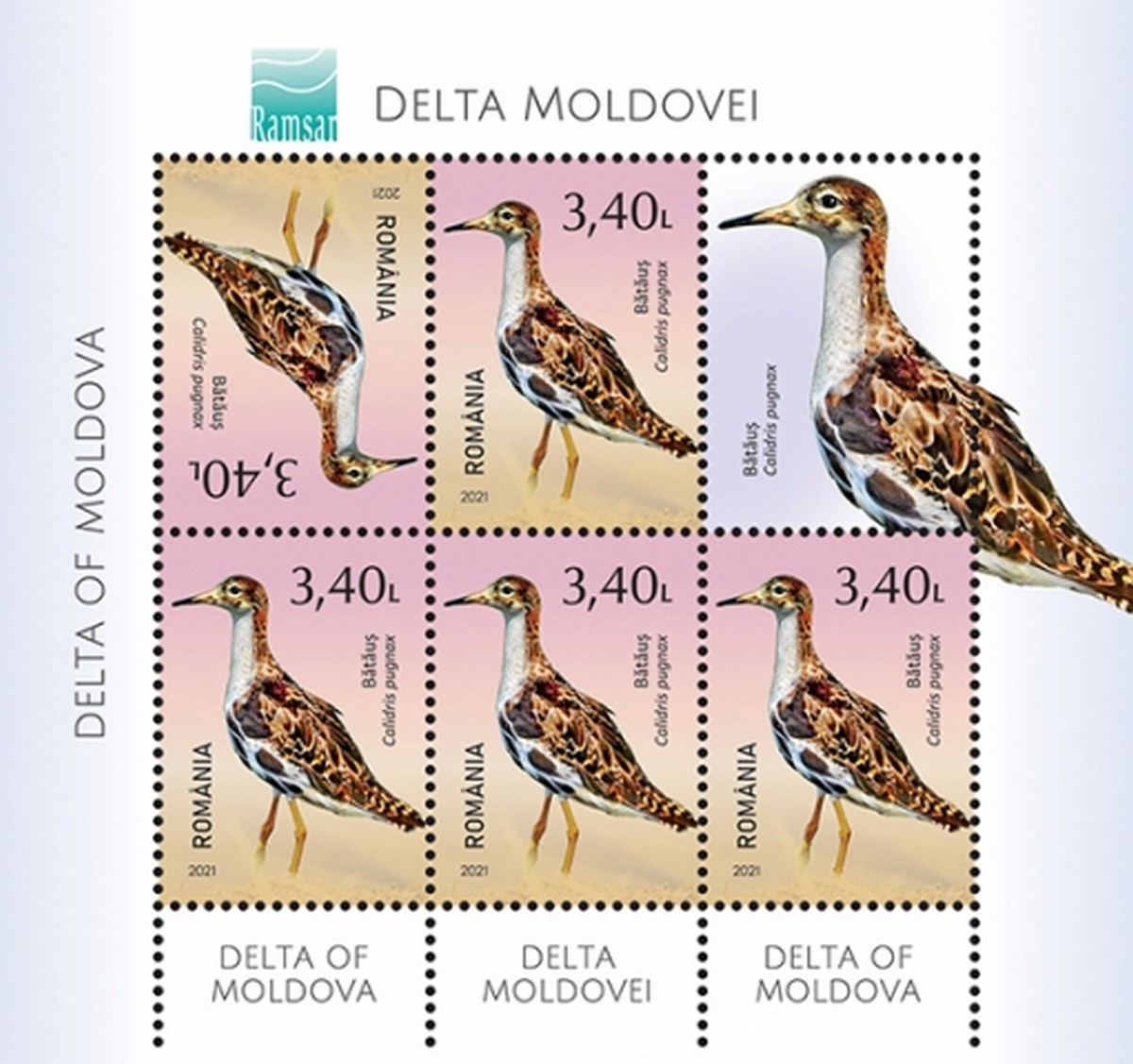 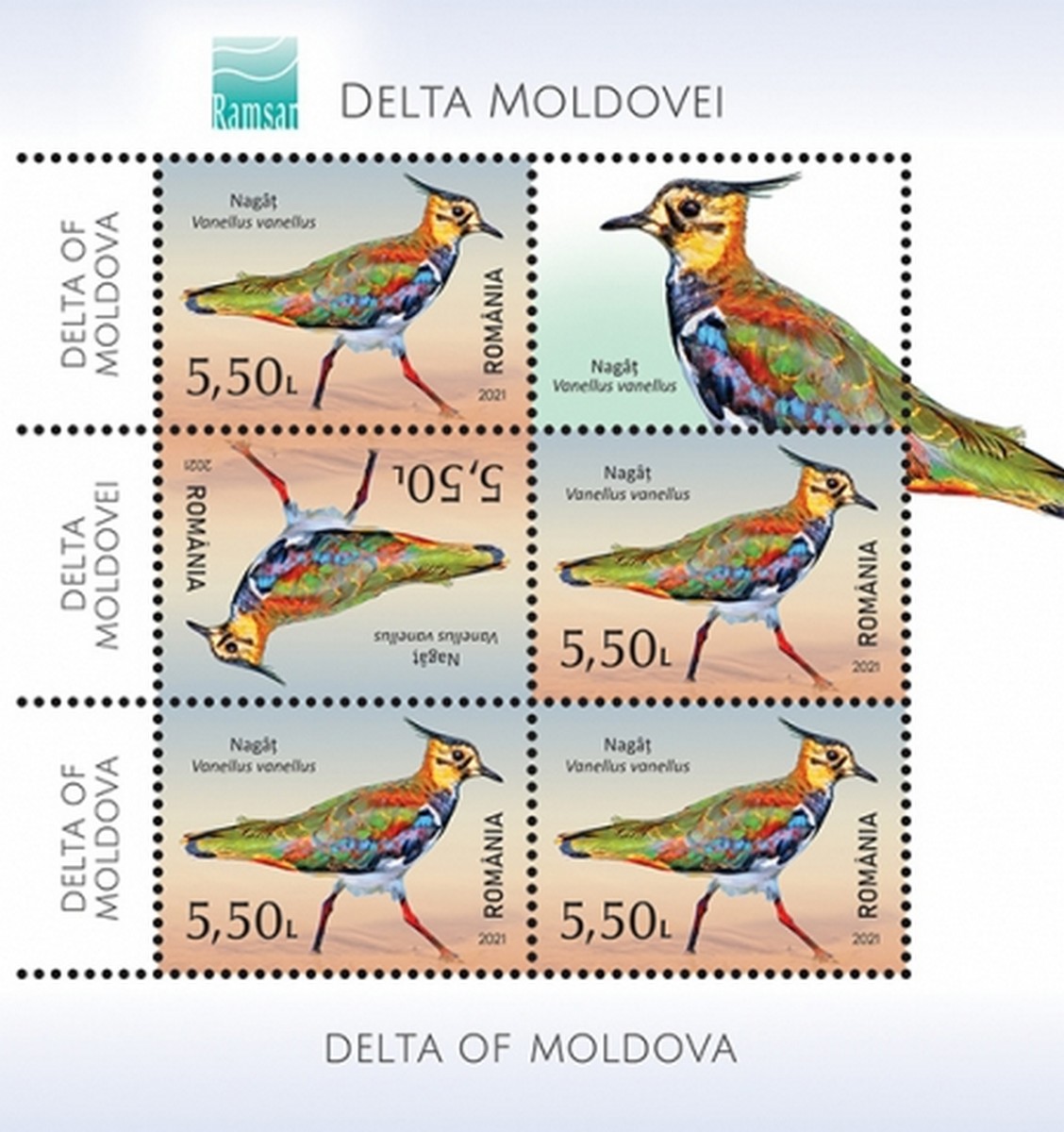 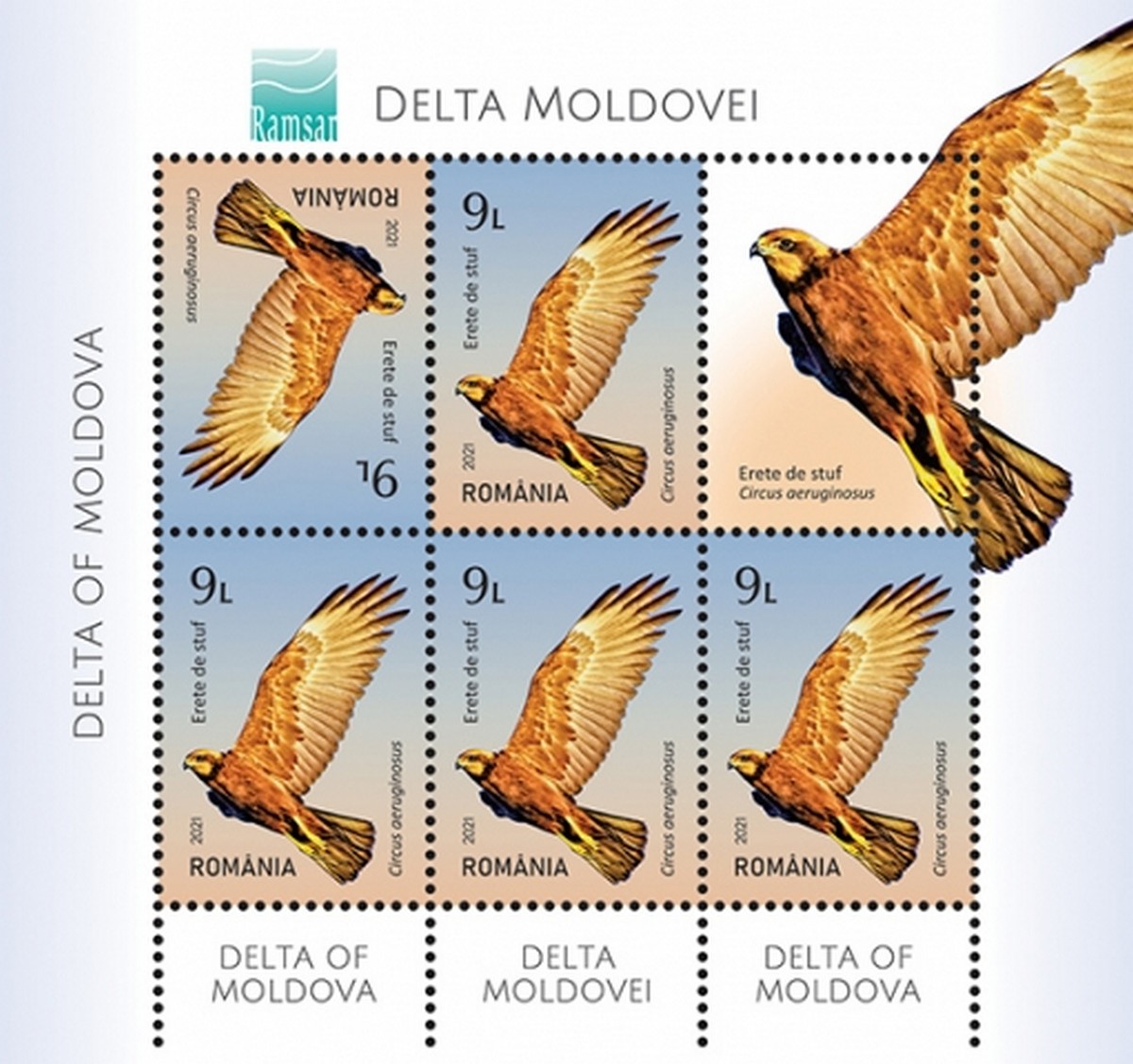 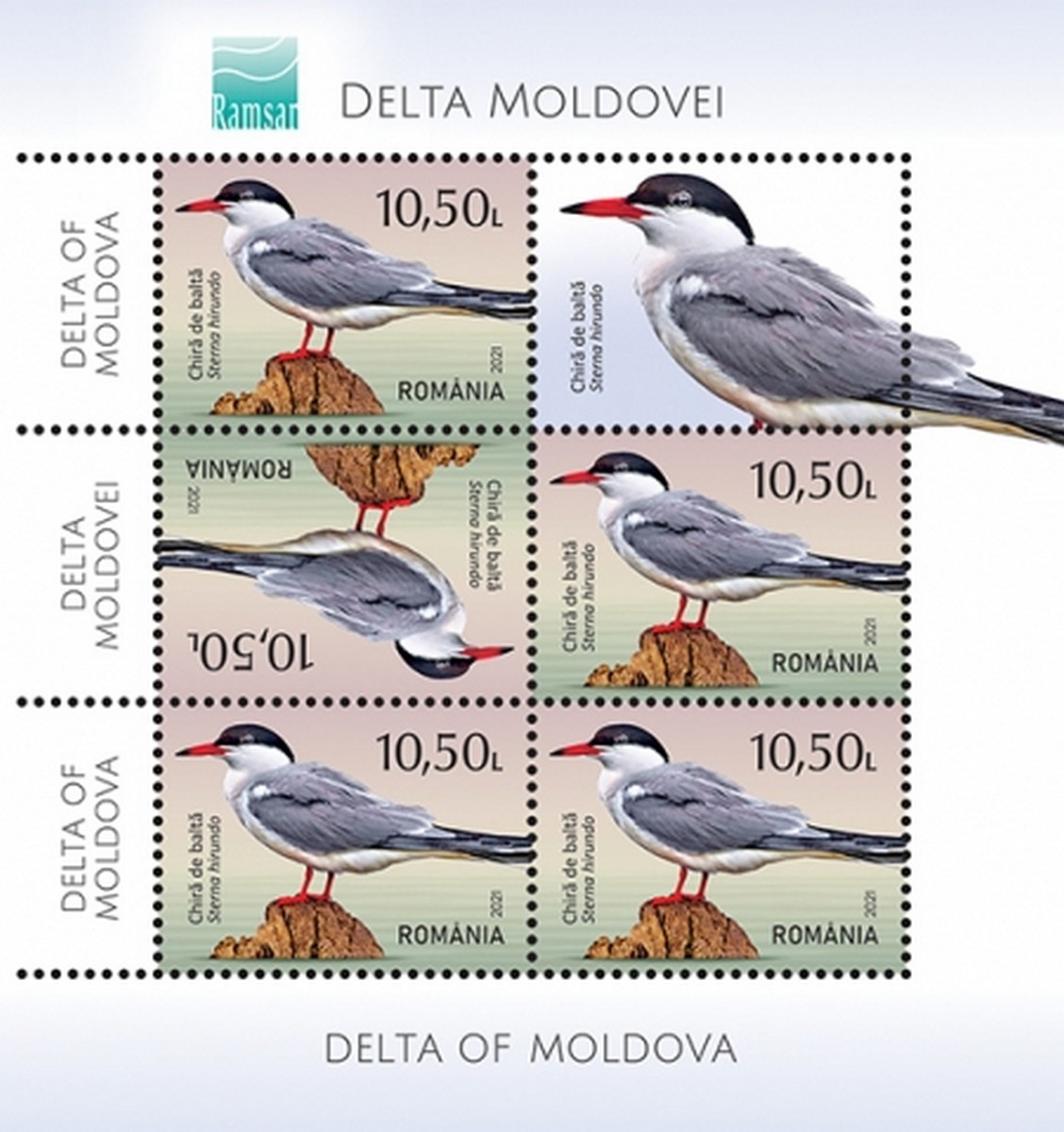 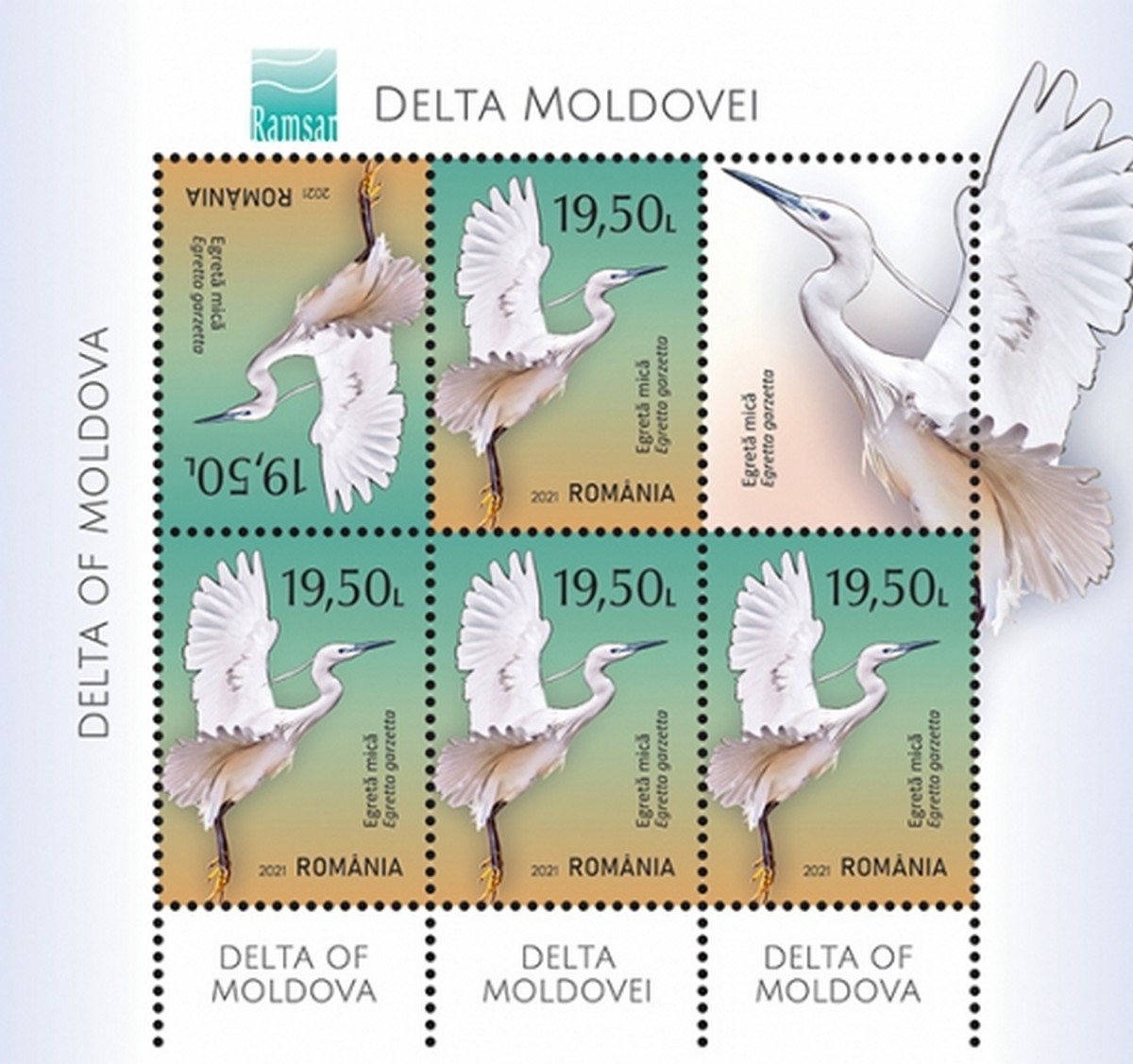 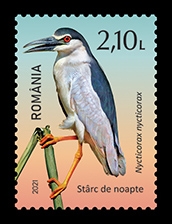 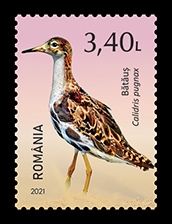 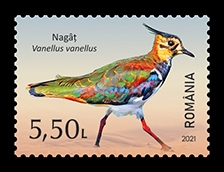 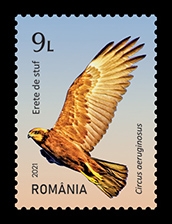 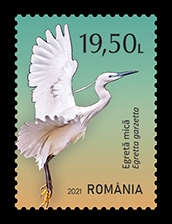 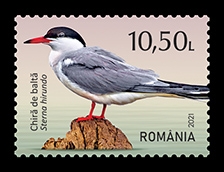