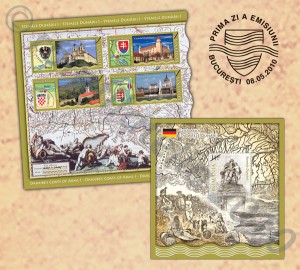 This is the reason why Romfilatelia dedicates to the great river a first issue of postage stamps from a series entitled “Danube´s Coats of Arms”.

“Among the famous rivers which are navigable when one comes from the sea there is also the Istros…”, Herodotus wrote in his well-known Histories this being also the oldest description of the river.

This river has always been for the nomadic or permanent peoples the most used way of commercial and military transport.

On “Rio Divino”, as the Spanish called it, Phoenician and Greek vessels, Roman galleys, Byzantine caravels, as well as Venetian galleons used to pass. Later on, besides the Turkish ships, the corsairs´ ships appeared, too.

After having been for a long time the North border of the Roman Empire, the Danube became the access way into the empire for Goths, Slaves, Huns and Germanic tribes.

Subsequently, the crusaders used it on their way to Constantinople and the Holy Land and backward, the Ottomans used it to easily penetrate Europe.

The Danube, Europe´s second longest river and the only one flowing from West to East, originates in the Black Forest Mountains and after a journey of more than 2800 km flowing through the territories of ten countries, it ends it´s long trip into the Black Sea.

The Danube starts at Donaueschingen (Germany) where two small mountain rivers join together: Breg and Brigach.

From here, the Danube flows to the towns of Ulm and Regensburg (North-East) and then returns to Passau (South-East), crossing over the first border to continue its way to Austria. Then it flows through “the Country of Waltz”, by Linz and Vienna.

After leaving behind the Austrian capital, the river comes through the “Devin Gate” on its way to Slovakia. Between Bratislava and Szob, the river is a natural border between Slovakia and Hungary.

After having crossed the Great Hungarian Plain (Alföld), the river reaches Budapest, flowing under majestic and famous bridges, subsequently marking the Eastern border of Croatia.

Melk Abbey (Republic of Austria) is illustrated on the postage stamp with the face value of RON 1.40.

Bratislava Castle (Slovak Republic) is illustrated on the postage stamp with the face value of RON 2.40.

On the postage stamp with the face value of RON 3.10 is illustrated the Ilok Fortress (Republic of Croatia).

The Palace of the Parliament – Budapest (Republic of Hungary) is illustrated on the postage stamp with the face value of RON 4.30.

On the souvenir sheet of the issue with the face value of RON 14.50 is illustrated a scene sculpted by Adolf Heer which describes “Mother Baar” together with the Young Danube and is part of the sculptural ensemble “Danube´s Spring” from the Fürstenberg Castle yard (Donaueschingen – Germany).

We warmly thank for the support granted in the achieving of this postage stamps issue to the Embassies in Bucharest of the Federal Republic of Germany, the Republic of Austria, the Slovak Republic and the Republics of Croatia and Hungary.

We also thank to Croatian Post, the photographers Mario Romulic and Drazen Stojcic (Croatia), Mr. Ivica Milicevic, director of Ilok Tourist Association (Croatia), as well as to Mr. Andreas Wilts, the director of the History Museum of the Fürstenberg Castle in Donaueschingen (Germany). 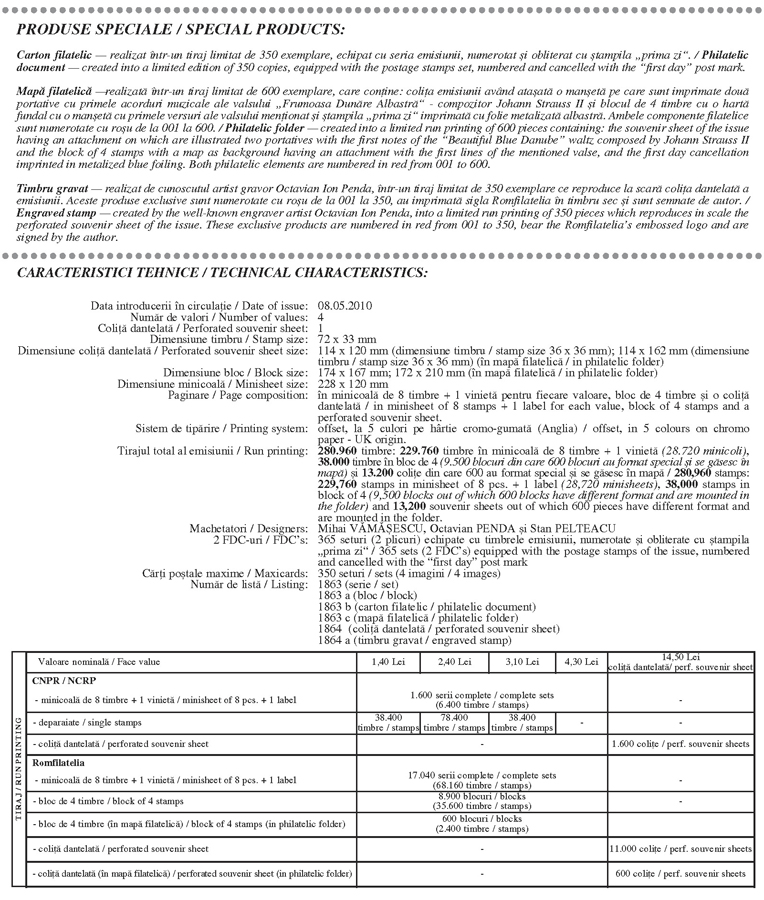