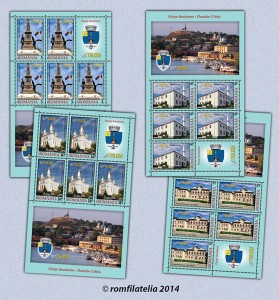 “A city and a world on the border of two universes that are so different: the Ottoman Empire and Europe. ” (Nicolae Ariton)

“ (…) Tulcea. Here the Danube makes a wide curve towards the south and pushes the city into two dry, rocky hills, on whose back the windmills lay out one after another in the blue sky horizon like bent beggars, with the arms wide open”; this is how Alexandru Vlahuta depicted the Danubian town in the description of the Picturesque Romania.

From the Roman period (1st-7th centuries AD) the existence of the settlement is marked by the important mention of the city of Aegyssus in poet Ovid’s work Epistulae ex Ponto (“Letters from the Black Sea”). Valuable information on the mid-Byzantine period belongs to Constantine Porphyrogenitus, 10th century AD. The earliest known mention about Tulcea, from the Ottoman chancery documents, dates from the early years of the 16th century. In a registry from 1502 is recorded the Tulcea village, hass of the sangeacbei (Silistra). Testimonies of foreign travelers from the 16th-17th centuries include Tulcea among the most important places in the Lower Danube.

Romfilatelia dedicates to the city from Dobrogea the postage stamp issue Cities of the Danube, Tulcea, by illustrating four tourist sights included in the cultural heritage of the place.

The stamp with the face value of lei 3.00 depicts the Independence Monument dedicated to the the heroes of the War of Independence (1877-1878) and built on the ruins of Aegyssus.

The execution of the monument was entrusted to the sculptor Giorgio Vasilescu, and after his death, to the sculptor Constantin Balacescu. The ensemble was completed in 1899, but was inaugurated on May 2nd, 1904 in the presence of King Carol I. At the base of the obelisk, were two sculptural elements: a Dorobant with a gun on his shoulder and a bugle in his hand, as well as a giant eagle with open wings. The Independence Monument was rebuilt in 1932 after its destruction between 1916-1918, but it was only in 1977 that it regained the original shape, with the statue of the Dorobant and the eagle thanks to the sculptor Cristea Grosu.

On the main front of the pedestal was mounted a plaque with the words: “This monument was raised by the citizens of the country from Tulcea, in MDCCCXCIX to the eternal memory of Dobrogea’s return to the ancestral home, through the bravery of the Romanian army led by King Carol I”. (MDCCCXCIX = 1899)

On the stamp with the face value of lei 3.30 is illustrated the “Spiru Haret” in Dobrogea College, the oldest institution of secondary education in the county, established in 1883 as the Science Gymnasium for Boys, and turned into a high school in 1897. At the time, a special support was granted to the school by the scientist and educator Spiru Haret, then Minister of Public Instruction. In 1903, the high school was given the name of Prince Carol and on December 1st, 1916, the school closed during the regime established by the Bulgarian-German-Turkish military occupation, resuming its activities in 1918. Until 1928, the high school had operated in the former property of Ahmed Resim Pasha, which would be demolished to make way for the current headquarters of the institution.

The stamp with the face value of lei 4.30 illustrates the image of the Aziziye Mosque (known as Sultan Abdul Aziz’s Mosque), a place of worship and historical monument, inaugurated in 1863.

The sanctuary was built in the style of the old mosque during the reign of Sultan Abdul Aziz, whose name it bears. The construction of stone, brick and wood houses a hall serving as prayer room for the Muslim rite people. Beside the building, stands a 25-meter hight minaret with a diameter of 3.55 meters, rebuilt in 1897.

The monument is characterized by simplicity, being built in the Moorish style and having a square-shaped sanctuary, the interior retaining the same characteristics of oriental ornamentation (inscriptions carved with Arabic letters can be found in the room).

The stamp with the face value of lei 14.50 depicts the St. Nicholas Episcopal Cathedral.

The cathedral was built on the place where Romanians from the Bestepe village built a wooden church. The cornerstone of the present church was laid in 1862 by Bishop Dionysius of Durostor, the inscription at the entrance standing as witness: “This holy shrine of the patron Saint Nicholas in Tulcea was built in 1865 during the Turkish rule, alongside with the old church.” The cross-shaped cathedral has a height of about 30 m and follows the Byzantine style with three towers. It is built of stone and brick and painted in oil inside. The ceiling is composed of 15 arches, supported by 8 massive pillars. The Renaissance painting was executed between 1905-1906, by painter Professor D. Marinescu, from the School of Fine Arts in Bucharest.

In 1867, while going for investiture to Constantinople by ship on the Danube, King Carol I stopped at Tulcea, honouring the invitation received from the then Matesatif of Dobrogea, Ismail Pasha. Carol I visited St. Nicholas Church, which was still under construction at that time and he donated to the church a white metal chalice, a little star and a disc, as well as 100 coins. So far, the St. Nicholas Church gathers a large number of precious metal objects, including a Saint Gospel, a 1888 edition, covered in silver. In 2008, the Church became the Episcopal Cathedral of the newly created Diocese of Tulcea.

Romfilatelia thanks the Municipality of Tulcea for the documentary and photographic support granted in the accomplishment of this postage stamp issue.