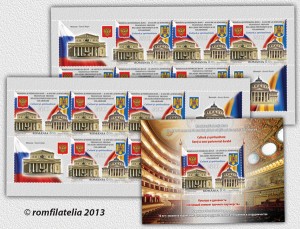 After the proclamation of Romania’s Independence on 9th May 1877 and its recognition by the great powers of the time – events which propelled the Romanian nation among the modern European nations – the diplomatic relations with Russia were established on 15th October 1878.

The collaboration relations between the Romanian rulers and the Russian tsars, on the background of the fight against the Ottoman domination in the south-eastern Europe, have a rich tradition. Spatharius Nicolae Milescu, Dimitrie Cantemir and other remarkable political and cultural personalities of the Romanian Countries had tight relationships with the Russian tsars. It must be mentioned the fact that Russia was the first European power that appointed consuls in the Romanian Countries in the 18th century: a general consul at Iasi and a viceconsul at Bucharest in 1780. After the 1859 Union, the first international convention concluded by Romania was with Russia (The Telegraphic Convention), through the Agreement of 15th December 1860, which came into force in 1862.

The historical changes of the 20th century that took place in the two countries resulted in the temporary interruption of the relations between Romania and Russia.

After the disappearance of the U.S.S.R., the soviet diplomatic and consular representations in Romania were recognised as diplomatic and consular representations of the Russian Federation, and the mission of our country in Moscow became the Romanian Embassy in the Russian Federation. In July 2003, the official inauguration of the Romanian General Consulate in Saint Petersburg took place, while October 2005 marked the inauguration of the Romanian General Consulate in Rostov-on-Don.

The signing of the Basic Political Treaty in July 2003 and of other billateral documents followed shortly by dialogue increase at the head of state level, head of government, foreign affairs ministers and leadership of parliaments represented a new stage for the Romanian-Russian relationships.

The postage stamps issue that Romfilatelia introduces into circulation presents the images of two reference edifices from the capital cities of the two countries, namely the Romanian Athenaeum and the Bolshoi Theatre.

The Romanian Athenaeum was built between 1886 and 1888 as a circular construction having the facade of a Greek temple and eight ionic columns of similar sizes to those of Erechtheion temple on the Acropolis. It was designed by the French architect Albert Galleron, assisted by the Romanian architect Constantin Baicoianu.

The interior of this symbolic monument of the Romanian capital city impresses by its splendor represented by the four spiral stairs of Carrara marble, the decorative sculptures made by Italian and German artists and the other rich ornaments.

On 1st March 1898, the chords of Poema romana under the baton of young George Enescu sounded for the first time under the cupola of the Athenaeum. Numerous prestigious events followed, where world-famous composers, conductors and interpreters such as Arthur Rubinstein, Yehudi Menuhin, Maurice Ravel, Pablo Casals, Sviatoslav Richter were present.

The Bolshoi Theatre or the Great Theatre was established in 1776, when it was granted to Prince Pyotr Urusov the privilege to present theatrical, opera and ballet performances. At the beginning, the shows took place in a private house, but as of 1780 they were held in the current building of the theatre. Due to the swampy land in the centre of Moscow, the building was built on wooden pillars. The theatre got its current name in January 1825.

In 1805 the building was destroyed in a fire. Another fire ruined the interior of the theatre in 1853. Later on, it was rebuilt in a more elegant form, designed by the Italian architect Alberto Cavos (1800-1863) and preserved until today.

After the dissolution of the U.S.S.R., some of the construction and decorative elements of the building were deteriorated. Repairs started in 2005 and lasted for 6 years.

On 28th October 2011, the Bolshoi Theatre reopened with a festive ballet and opera music performance, where the famous Romanian opera singer Angela Gheorghiu participated as well.

This postage stamps issue fits into the context of promoting the cultural relationships, resumed on the basis of some joint programmes, which can be found in a longer array of cultural and spiritual events, that have become a strong liaison for a sustainable partnership.
Issue date: 2013-07-09 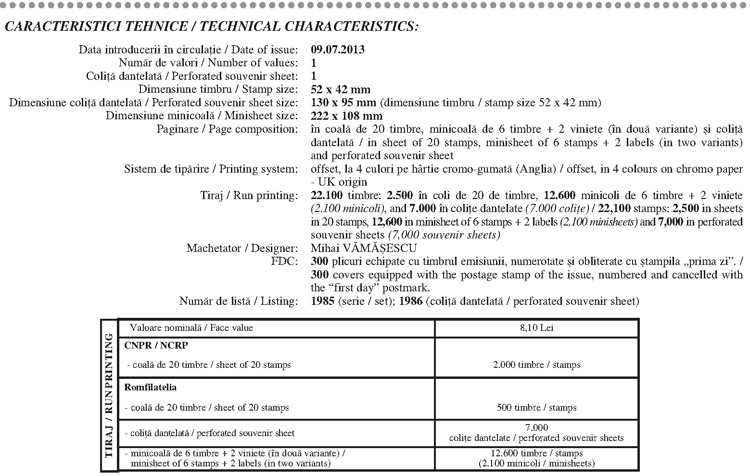