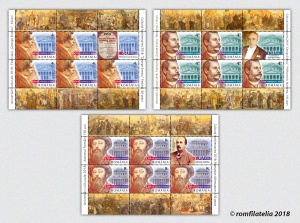 “George Enescu” Philharmonic was founded in April 1868, at the initiative of the conductor and composer Eduard Wachmann, one of the most appreciated artists of the time, with a 35-years activity in the field of classical Romanian music. The first concert took place on December 15, 1868, conducted by his founder. Over time, Wachmann and the Philharmonic succeeded in developing the musical culture of the Romanian elites and popularizing classical music masterpieces.

In the 150 years of activity, names such as Eduard Wachmann, George Enescu, George Georgescu, Constantin Silvestri, Sergiu Celibidache, Cristian Mandeal, Horia Andreescu, Christian Badea make up a continuity of excellence in the Romanian art of conducting. During the interwar glory period, there was no important conductor or soloist who did not play in concerts in Bucharest. After 1990, Sergiu Celibidache became the Honorary Director of the Philharmonic, and names such as Sergiu Comissiona, Lawrence Foster, Heinrich Schiff, Seiji Ozawa, David Jimenez Carreras and Maxim Vengerov have brought the former glory to classical music concerts.

Symbol of the national culture, the Romanian Athenaeum was built in the heart of Bucharest, 130 years ago (1886-1888). The origins of the institution date back to 1865, when Constantin Esarcu, Vasile Alexandrescu Urechea and Nicolae Kretzulescu founded the Literary Society “Romanian Athenaeum”, in order to educate the middle classes through public courses and conferences.

The Palace of the Romanian Athenaeum was built with money from a public subscription, using the slogan “Give one Leu for the Athenaeum!”. The creator of this cultural settlement is the French architect Albert Galleron, famous at the time for the public and private edifices he has built, including the old Palace of the National Bank of Romania. For the construction of the Athenaeum, Galleron collaborated with the most appreciated Romanian architects, including Alexandru Orascu, Ion Mincu, Ion Socolescu,
Grigore Cerkez etc. Inspired by the ancient Greek temples, the building captures at first sight a historic column supporting a triangular fronton. The exceptional acoustics of the Romanian Athenaeum placed the concert hall among the most successful buildings of its kind in the world.

The grandeur of the building is also supplemented by the fresco in the concert hall, depicting the emblematic moments of the national history. The masterpiece belongs to Costin Petrescu (1872-1954), a remarkable artist in the technique of mural painting, who made large frescoes for public and religious buildings during the interwar period. He also designed the royal robe that King Ferdinand I wore at the Coronation of Alba Iulia, in October 15, 1922. The garment was inspired by the costumes of the Romanian medieval rulers.

The International Festival “George Enescu” is the most prestigious musical event hosted by Romania. The first edition took place in September 1958, three years after the death of George Enescu. The inaugural event was attended by great names of the classical world music, such as the violinists Yehudi Menuhin and David Oistrakh, or the conductors Sir John Barbirolli and Carlo Felice Cillario. In the ’70s, the international amplitude of the festival diminished, but with the 1991 edition, great names of classical world music reappeared in the repertoire.

On the labels of the issue are reproduced: one of the posters the first edition of the “George Enescu” Festival and the portraits of Constantin Silvestri (1913-1969), one of the most important conductors of the 20th century, and Constantin Esarcu (1836-1898), founder of the Literary Society “Romanian Athenaeum”. The minisheet of the issue illustrated the fresco from the concert hall of the Romanian Athenaeum.

Romfilatelia would like to thank “George Enescu” Philharmonic Bucharest, the Romanian Academy Library and the National Museum “George Enescu” for their support granted for the achievement of this postage stamps issue, alongside the photographers Lucian Tudose and Ioana Chirita. 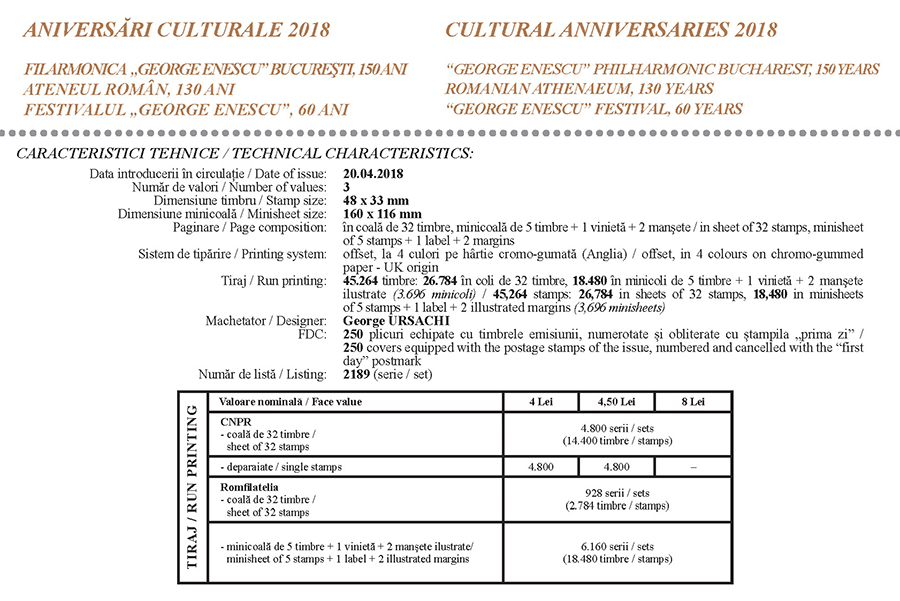