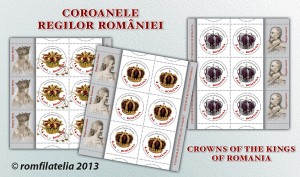 According to these rules, the postage stamps issue “Crowns of the Kings of Romania” reminds to former generations and presents to new ones the symbols of the Romanian royalty on the background of the great events in the history of our people which marked the State Independence and recognition of Romania as a sovereign country and a fundamental piece of the state structure that has still been forming the European community.

“I proudly receive this Crown that was forged from the metal of a cannon covered by the blood of our heroes and was blessed by the church. I receive it as a symbol of the independence and power of Romania.”

These were the words of King Carol I on his Coronation of 10 May 1881, when Romania became a Kingdom.

The Steel Crown of King Carol I, a symbol of the State Independence of Romania, afterwards of the Country Reintegration and an important symbol of the Romanian Monarchy, was manufactured from the steel of a cannon captured by the Romanian army against the Ottoman armies at Plevna in 1877.

The designs of the crown and the scepter were made by Theodor Aman and the crown was forged at the Army Arsenal.

According to the heraldic standards, the crown consists of a frontal steel circle embellished by oblong (elongated), diamond-shaped and spherical profiles also made of steel which simulate precious stones and pearls. Eight large, leaf-shaped (floweret) ornaments, alternating with eight smaller shapes, are applied over the circular ring. Eight narrow arched blades, embellished with profiles reproducing the volumes of pearls start from the tip of the flowerets and are joined together in a globe closed by the element reproducing the cross “Danube Crossing”. The steel elements of the crown are completed by the inner purple velvet liner.

The Crown of Queen Elisabeta completes the concept of modesty and austerity of the crown of King Carol I, being based on the simplicity of volumes and designed with a circular base with edges marked by veins.

An arched beam, with a vein in the middle, on which golden spheres are applied with rivets instead of beams, starts from behind each shield. The beams are gathered under a distance washer with decorated edges on which lies a sphere stamped by a golden cross in the form of the “Danube Crossing” decoration. Inside, the crown is lined with purple velvet. The two crowns were blessed by the Bucharest Archdiocese on 9 May 1881.

After King Carol I passed away, Ferdinand, the nephew of the first ruler of Romania, succeeded. The new ruling family, King Ferdinand and Queen Marie, witnessed the making of the Greater Romania on 1 December 1918. The official status of theUnionwas recognized by the Western powers in 1922.

The historical event was spectacularly marked on 15 October 1922, when Queen Marie’s golden crown shined in all its splendour next to the steel crown worn by King Ferdinand. Over 50,000 people approved the blessed Coronation of the first rulers of all Romanians in the Alba Iulia Cathedral.

The gold of the Crown of Queen Marie was a unique model, designed by Costin Petrescu and forged by the Falize Frères House ofParis. The uniqueness of the crown is not only in its design being not like that of the regular crowns of the European dynastic houses, but also in its ellipsoidal shape (the European ones are circular) and in the choice of semiprecious stones as decoration (the European ones used only precious stones and pearls). Another peculiarity of the crown is the use of the patterns of the wheat grain and the cross with arms ending in 45° inclination.

Queen Marie’s crown is considered one of the masterpieces of the 20th century gold processing craft.

Together with the scepters and the royal robes (which are deemed to be monarchic symbols), the crowns of the Romanian rulers have always represented a symbol of the State independence, the constitutional monarchy bringing a fundamental contribution to the consolidation of the modern Romanian State.

We would like to thank the Romanian National History Museum for the do cumentary support granted in the accomplishment of this postage stamps issue. The photographs of the royal crowns were made by Marius Amarie. 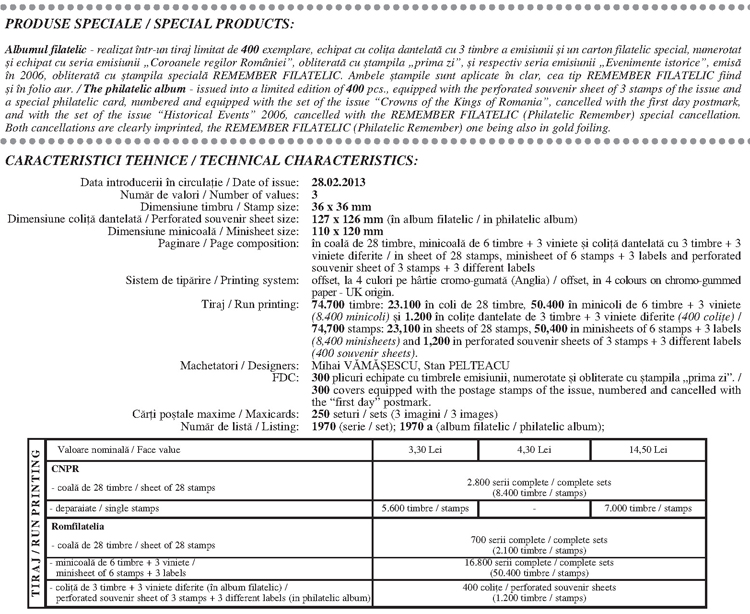