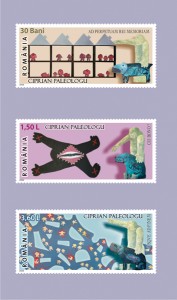 Ciprian Paleologu was born on the 4th of August 1976, in Ploieşti, where he attended, between 1990 and 1994, the courses of the “Mihai Viteazul” theoretical high school. In 1999, he graduated the Arts University of Bucharest, Painting section, in the class of the Univ. Prof. Vasile Grigore. In 2005, he became  doctor in Visual Arts, in the Visual Arts Aesthetics specialization, defending his doctoral thesis with the subject “Light, luminosity and illumination in easel painting”, guided by the Univ. Prof. Dr. Gheorghe Achiţei.
Between years 1997 and 2006, he had six personal exhibitions, and between 1996 and 2004 he participated in 24 group exhibitions. Up to the present, he has won five prizes for his works. In 2005, a postage stamp appeared with the work “Monster 1”, within the series called “Contemporary Romanian Artists”, published by Romfilatelia, where, out of a dummying error, the artist´s name appeared as “Cristian Paleologu” instead of “Ciprian Paleologu”. Since 2000, he has been a member of the Plastic Artists Union of Romania, Bucharest subsidiary, Painting section.
In 2002, he became a university assistant at the Theory and Research Department, specialization of Perspective, and at the Painting Department within the Arts University of Bucharest, and during the period of 2002-2005 he was a collaborator professor at the “Ion Mincu” Architecture University of Bucharest.

The Human Project
To formulate a project meant to develop (sequentially) during a long period, usually exceeding the biological life of an individual, involves a complex risk. However, it is particularly the obviousness of the risk that exponentially increases the prerequisites for a not only spectacular but also conceptually consistent result.
Such an approach, meant to develop on two plans, is HUMAN. The first field represents a multiple prerequisite, conceived by several visual demonstrations (24 exhibitions), called A TRIBUTE TO INCAPACITY. The second plan is reserved to the conclusion which, through the very shape of the demonstration, is deeply utopian. The utopia of the conclusion implies the construction of an aggregate of human correction, called MANODROME (in Romanian: OMODROM).
Out of the 24 prerequisite recitals, four have already taken place in the premises of certain galleries, in chronological order: 1. HUMAN (2000); 2. DECADENCE (2002); 3. NIL MEDIVM EST (there is no middle way) (2004); 4. ANYWHERE IS NOWHERE (2006). The primary purpose of the blinking signals forming the prerequisite of the project is to render permanent the cultivation of the alert sensation, as well as to activate the feeling of insecurity, both at the individual level and at the collective level. Asserting and fully assuming one´s human incapacity with the typical easiness and commodity of the damned collectivities who, because of the acceleration of the inner and deep degradation, unconditionally capitulate proves to be the critical threshold between the final dissolution and a predictable non-dissimulated invigoration.
Thus, the construction of the MANODROME, the utopian conclusion, acquires the primordial dimension of salvation. This edifice of huge complexity will be “achieved” with the scientific and technological support of the Corrective Research Institute (I.C.C). The result of the equation keeps its non-functionality (preserving its utopian character) by deliberately omitting from the construction plan certain key-elements without which the MANODROME (the corrective aggregate) either remains only a miraculous promise, or functions with wrong parameters (proving its usefulness).
The HUMAN Project involves, right from the start, an existential irony, fully assumed, without which it would rank among absurd simulations.
The works appearing on the postage stamps of the “Contemporary Romanian Artists  Ciprian Paleologu  The HUMAN Project” series are part of the NIL MEDIVM EST exhibition that took place in 2004 at the APOLLO Gallery of Bucharest, representing the main components of this stage of the project.