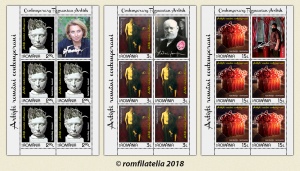 Romfilatelia introduces into circulation the postage stamp issue Contemporary Romanian artists, bringing to the attention of collectors and beauty lovers, three of the most important art creators at the moment – Daniela Fainis, Mihai Vladimir Zamfirescu and Ioan Nemtoi.

On the stamp with the face value of  Lei 2.90, is represented the work Dantesca I, the author being Daniela Fainis.

The stamp with the face value of Lei 3.00 illustrates the painting The Kiss (Sarutul), the artist’s creation Vladimir Zamfirescu.

The work of the artist Ioan Nemtoi, called Germination, is reproduced on the stamp with the face value of Lei 15.00.

Her works, generic faces, with empty expressions, sometimes hidden by masks, are exibited both in Romania and in prestigious museums and galleries in Japan, Germany, USA, Belgium, as well as in the main building of the European Parliament.

The artist’s desire to make bigger and more complex works has resulted in the ensemble of porcelain and metal works called The Porcelain Forest, exhibited in the Botanical Garden in Bucharest and in the courtyard of Mogosoaia Palace.

Daniela Fainis has received many awards and distinctions, among which: “Flacara” Award for Fine Arts (2010, Bucharest), Order of Cultural Merit in the rank of Commander, awarded by the President of Romania (2004), Honourable Mention (2002, 1998 and 1992, Japan), The Grand Prize of the International Biennial Fire Arts (1998, Bucharest), 1st Prize at the International Biennial Artistic Ceramics (1997, Aveiro, Portugal), Targa d’Oro at Concorso Internazionale Della Ceramica D’arte Gualdo Tadino (1989 and 1990, Perugia, Italy).

Vladimir Mihai Zamfirescu (n. 1936), a distinguished personality of the Romanian and European painting, graduated from the National Art University of Bucharest in 1966, as valedictorian, in the class of the artist Corneliu Baba.

In 1968 he obtained the certificate of church painter and became a member of the Union of Fine Artists in Romania. In the same year, he painted in the fresco, alone, the Church in the Meadow of Asau, in Bacau county.

The artist has created his own anthropological type – the turned face, drawing back, twisted not inward, but towards the cleft whereby all the suffering of the world either flows out or flows in.

We find his paintings in large pinacoteque, in private collections and famous art museums in France, United Kingdom (Tate Gallery, London), Italy, Germany, Spain, Austria, Switzerland, Netherlands, Sweden, Norway, Portugal, Greece, Russia (Puskin Museum), USA, as well as in royal and some heads of state collections. In 2003, he painted his gift to the Pontiff Sovereign, Pope John Paul II, sent from Romania to the Vatican, a work that today enriches the Collection of Vatican Museum of Art.

Among the awards, distinctions and grants received during his artistic career, we mention the International Triennial Prize (1971, Sofia), the Swedish Royal Academy Grant (1980), the Italian Academy Grant for Painting (1982), the Raffael Medal of the Caravaggio Academy (1982, Rome), the National Order for the Faithful Service in the rank of Knight, granted by the President of Romania (2003), Doctor Honoris Causa of the Art University of Cluj-Napoca, Professor Emeritus of the Art University in Bucharest, the Romania Cultural Radio Prize for the entire activity (2009), as well as the “Omnia Opera” Award, granted by the City Hall of Ploiesti (2018).

Graduate of the National Art University of Bucharest, specialization Ceramics, Glass, Metal, Ioan Nemtoi (born in 1964) is one of the best-known artists of the moment, recognized worldwide.

His works are appreciated, both for their fantasy and for the impeccable technique of accomplishment. Converted to tensions and balances, to narrative and symbol, Ioan Nemtoi’s art reveals a pensive, tense artist, passionate about the dynamics of forms, colors and the material that makes them.

Ioan Nemtoi, the first Romanian artist with a permanent exhibition in New York, opened in 2003, chose to remain in Romania, in Dorohoi, where he continued to create at 1,200º C.

Romfilatelia tahnks the National Museum of Romanian Literature and Prahova County Art Museum “Ion Ionescu-Quintus” for the photographic support granted for the achievement of this postage stamp issue. 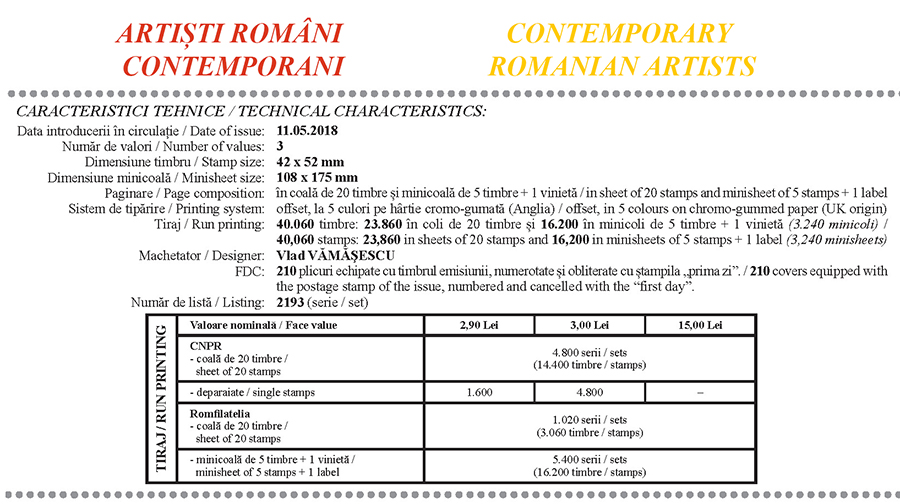