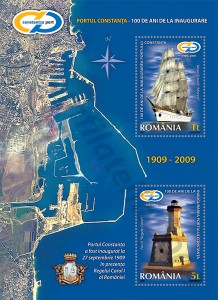 “Since Romania took Dobrogea through the courage of its soldiers in the Independence War and became the owner of the Black Sea, our thinking has always tried to find ways to facilitate exportation of the country throughout the year.

To open the infinite ways of the seas for Romania, we brought together the two banks of the Danube, between Fetesti and Cerna-Voda, building the famous bridge King Carol I and in 1896, the year of our salvation, we laid the foundation of Constanta harbour, whose inauguration we celebrate today. Since then, we gradually took care to ensure the means so as to finish the works for the export of cereal and oil representing 85% of our Country&acute;s export.

We hope that God will give Romania peace and prosperity to finish as soon as possible the entire harbour meant to support the economic growth of Our beloved Country, today, on the twenty-seventh day of September 1909 and in the forty-third year of My Reign, we also inaugurated the first cereal warehouse out of the four that are being built and the installation for the oil export.&#8221;

This is a part from the speech of the founder of modern Romania, King Carol I, at the inauguration of the largest Romanian harbour – Constanta. Next to the King, there also were Queen Elisabeth, Prince Ferdinand, the heir to the throne and Princess Maria, ministers, Chairmen and Vice-chairmen of the Regulatory Bodies and the clergy representatives.

Inaugurated in 1896, the building and modernization works at Constanta Harbour lasted for almost 13 years. Starting with 1899 the coordination of the works was taken over by the engineer Anghel Saligny who became the general manager and the chief designer of the harbour. Thus, there were executed drainage works, there were erected the breakwater, the entrance and the South dams and the quays, and there were built 6 basins, the oil tanks and silos.

In the foundation stone of the Harbour, Kink Carol I put the document that confirmed “the setting up of a harbour at the shores of former Euxine Sea, where from ancient times commerce has found its place, where so many historical monuments remind us of the old domination of our Roman ancestors and where poet Ovid dieds

Two years after the inauguration, in Constanta harbour there were operated more than 1,4 million tones of goods.

In the interwar period, new infrastructure elements were added to the harbour platform, such as the building for harbour administration, the stock exchange, the corn drying yard and the floating dock. In 1937 the traffic attained 6,2 million tones of goods, figure that situated Constanta among the first European harbours.

After more than 30 years, in 1968 there started the works for the extension of the harbour in the South part.

An important role in the harbour development was played by the building of the Danube – Black Sea Channel, inaugurated in 1984.

The traffic peak of this harbour was in 1988, when there were operated 62,3 million tones of goods.

At present, Constanta harbour – the largest harbour of the Black Sea and among the first ones in Europe – has a total surface of over 3,600 ha, which are almost equally distributed on land surface and on water.

Constanta Harbour has an annual operation capacity of more than 120 million tones, being served by 156 berths, out of which 140 are operational. The total length of the quays exceeds 29 km, and the depths vary between 7 and 19 m, allowing the access of ships with a capacity of up to 220,000 tdw. These are completed by the container and passengers terminals.

Today Constanta Harbour is the rotating table of the commercial routes making the connection between the markets of the Central and Eastern Europe, that do not have access to the sea, and the Transcaucasian Region, Central Asia and the Far East.

The background image of the block of two stamps represents a philatelic premiere, being the first satellite image illustrated on such a Romanian philatelic product.

We thank to the National Company “Maritime Ports Administrations S.A., Constanta and to the Romanian Naval Museum of Constanta for the accomplishment of this postage stamps issue.