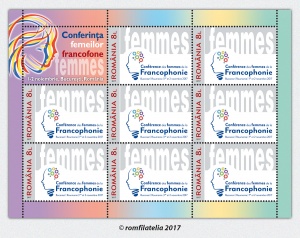 On November 1-2, 2017, the Francophone Women Conference will be held in Bucharest, organized by Romania and the International Organization of La Francophonie (IOF), under the High Patronage of the President of Romania, Mr Klaus Iohannis.

To mark this event, Romfilatelia, the issuer of stamps and Romanian postal effects, introduces on 1 November 2017 the issue of CONFERENCE OF FRANCOPHONE WOMEN.

The organization of this event in Bucharest is still a testimony of Romania’s deep conviction that gender equality between women and men, in the Francophone space and around the world, is indispensable for the building of democracy and peace and respect for human rights. We also mention the significant support given to the cause of gender equality around the world by the President of Romania, who is one of the ten Impact Champions of the UN project HeForShe.

Through its general theme – Creativity, Innovation, Entrepreneurship, Growth and Development: Women making a name – The Conference also makes a significant contribution to the development of the Francophonie economic dimension.

Francophony is the politico-cultural ensemble of the peoples who commonly use French. The term “francophone” appeared in 1880 when the geographer Onésime Reclus used it to define the groups of people and countries that used French in different circumstances.

The International Organization of La Francophonie is currently mobilizing 84 states and francophone governments in five continents in favour of its guiding principles for peace, democracy and sustainable development. Gender equality, women’s rights and empowerment are a major focus of the francophone agenda, particularly at the first Francophone Women Conference (Luxemburg, 2000).

Since joining as a full member of institutional Francophony in 1993, Romania has firmly committed itself to promoting francophone values, becoming the regional leader of the Organization. In 2006, Romania hosted the 11th Sommet of the Francophonie, organized for the first time in Central and Eastern Europe.

Romania’s activity within the Francophony is deeply anchored in its rich Francophone and Francophile heritage. By belonging to the great Francophone family, its identity is established with a European destiny and a francophone vocation.

The stamp’s graphics depict the Francophone Women Conference logo, and the first day cover of the issue reproduces the image of Léopold Sédar Senghor’s bust displayed in the Francophone Square in Bucharest. The face value of the stamp is 8 Lei.

The postage stamp issue is completed by a First day cover and as page composition there were used a sheet of 32 stamps, a minisheet of 8 stamps and a label.

Romfilatelia thanks the Ministry of Foreign Affairs for the documentary support given to this postage stamps issue and photographer Lucian Tudose.