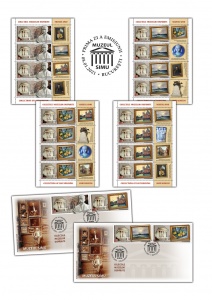 Romfilatelia continues the series of themes dedicated to art and collectors by introducing into circulation a postage stamps issue with a unique theme, the Collections of Lost Museums, dedicated to recovering the memory of a museum once well-known and appreciated in Bucharest: Simu Museum.

When this museum was inaugurated on May 21st, 1910, its patrimony consisted of 624 artworks: paintings, sculptures, graphics and decorative art objects. Founded by collectors Anastase and Elena Simu, the Simu Museum ensured a connection of the Romanian artistic environment with the Western world, and the two collectors supported contemporary creation by offering annual awards to young artists.

Each of the four stamps of the series presents the building of the Simu Museum, immortalized by a well-known photographer of that time, Hr. Duratzo, along with a work of art from the museum’s collection. The building has the shape of a Greek temple, inspired by the Erechtheion temple in Athens, and was built specifically to house the rich art collection of spouses Anastase and Elena Simu.

In 1927, the collection, which already contained approximately 1,200 pieces, was donated to the Romanian state. Under the leadership of the painter Marius Bunescu, the Simu Museum functioned in this building until 1960, when the building was demolished by the communist authorities. Part of the collection is today at the National Museum of Art of Romania, and another in the Simu collection at the Pinacotheque Gallery in Bucharest, managed by the Museum of Bucharest.

The four works of art, represented on stamps, are:  Anastase Simu, a bust sculpted by Frederick Storck; a still life painted by Marius Bunescu: Pears; a Marine painting by Eugen Voinescu; Venice, work of the painter Stefan Popescu.

The image on the first stamp of the series, with the face value of Lei 3.30, represents Anastase Simu artwork. The marble bust, made by the sculptor Frederic Storck in 1901, was in the place of honour, in the second room of the Museum. Later, the work arrived in the collection of the Frederic Storck and Cecilia Cutescu-Storck Museum.

The work Pears, signed by Marius Bunescu, the former manager of the Simu Museum, is reproduced on the second stamp of the series, with the face value of Lei 5. The artwork was donated by the painter himself in 1932 and exhibited in the Museum. This work is today in the collection of the Pinacotheque in Bucharest.

On the third stamp of the series, with the face value of Lei 8.50, is depicted the Marine painting of Eugen Voinescu, a painter with studies conducted in Paris around Gustave Courbet, who excelled in painting of this kind. The artwork was painted in 1900 and purchased from the artist a year later. It is currently in the collection of the Pinacotheque Gallery in Bucharest.

Stefan Popescu’s Venice, reproduced on the fourth stamp of the series, with the face value of Lei 10.50, was painted by the artist in 1923 and has been exhibited over time in various exhibitions, most recently in 2020, during the exhibition opened at the Sutu Palace – Simu Museum and Bucharest Art Gallery.

On the first day cover, the vintage photograph, taken by the same Hr. Duratzo, captures the collector Anastase Simu in the third room of the Museum, sitting in an armchair right in front of his portrait, made in 1909 by the French artist Pierre Gourdault.

Romfilatelia brings thanks to the Museum of Bucharest for the documentary and photographic support provided for the development of this postage stamps issue. 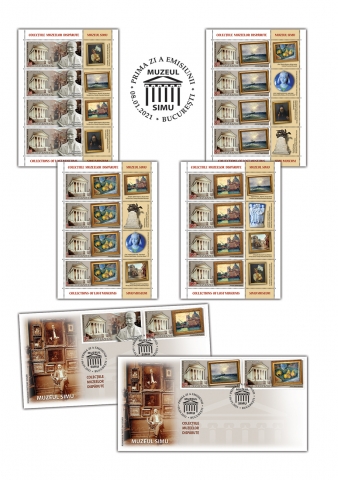 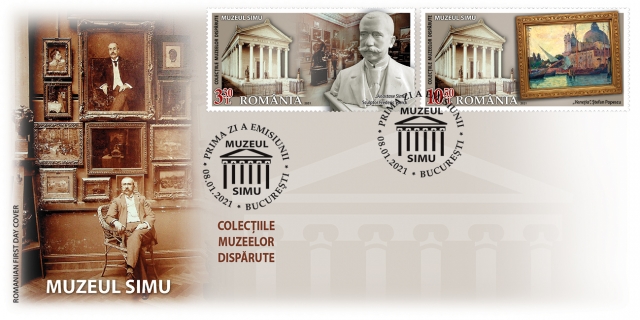 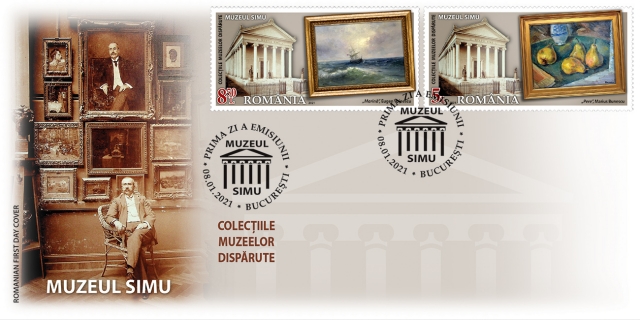 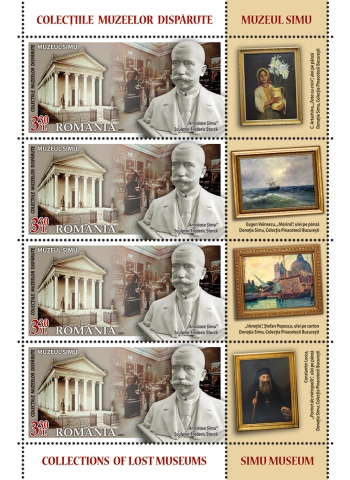 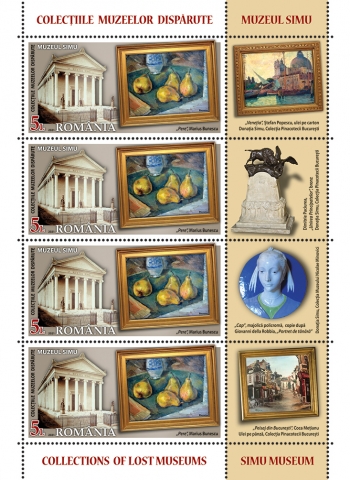 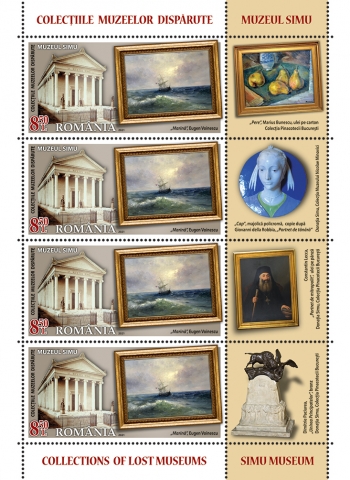 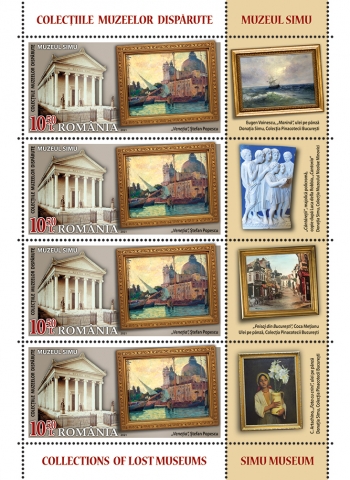 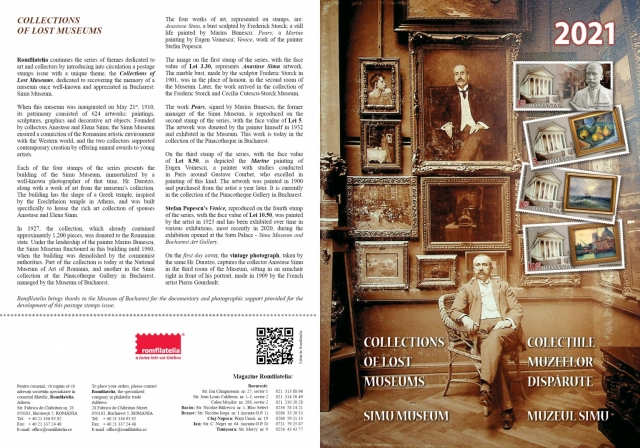 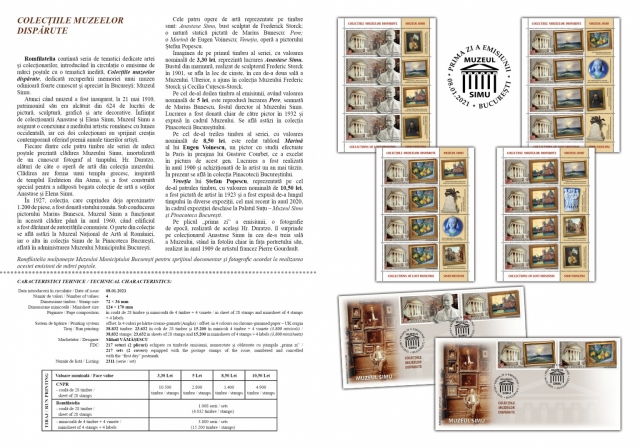 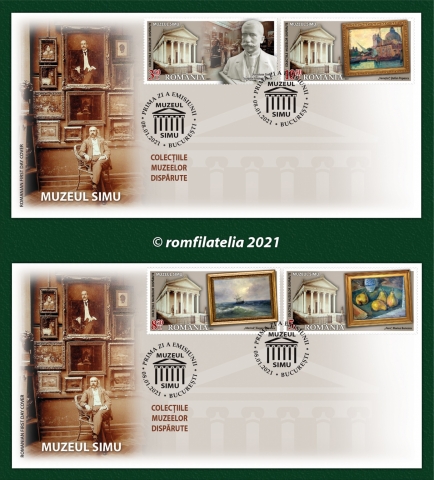 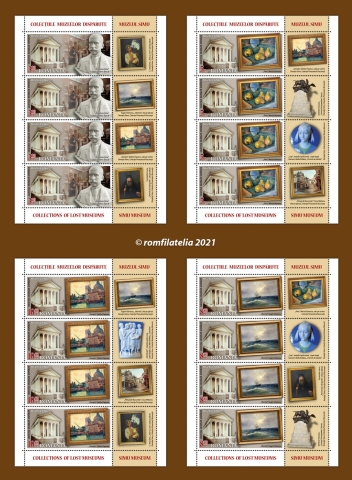 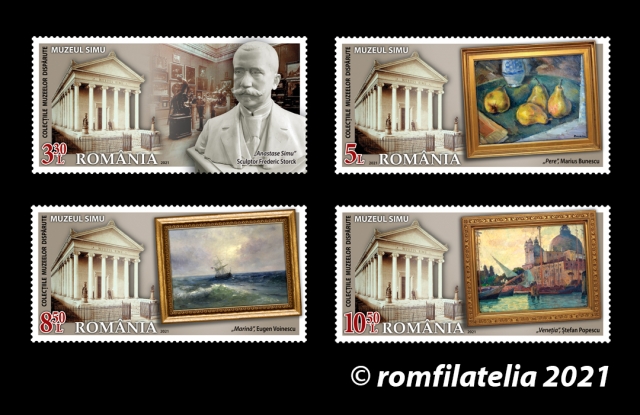 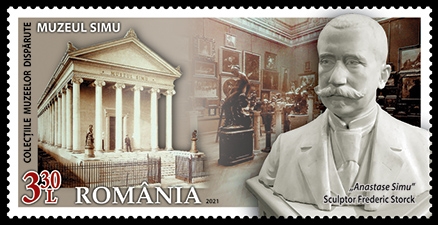 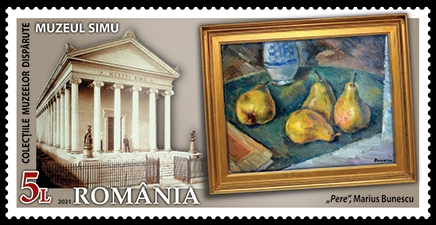 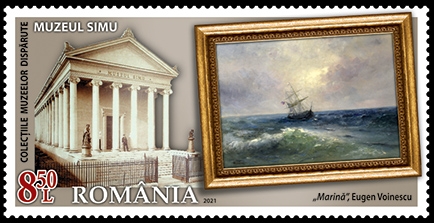 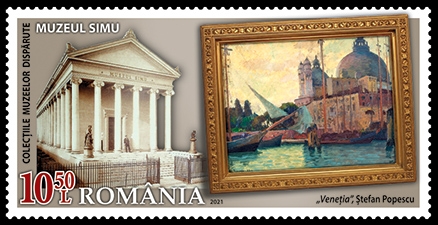