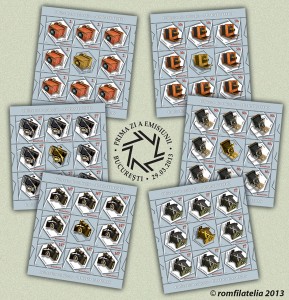 For the collectors fond of the themes approaching the field of photographic technique Romfilatelia introduces into circulation the postage stamps issue Collection objects – Photo Cameras.

The term photography associating two terms coming from the Greek language, fotos and grafein, is simply translated in the current language: writing with light.

The alchemists of the Middle Ages knew that a substance, the silver chloride, got dark after having been exposed to light. The first photographic images were made by combining this property with the effect of fixation of the image on a plate, at first a metal plate, and its sinking after exposure into a sodium hyposulphite solution.

The first important step into photography was made by physicist Joseph Niepce who, in 1829, combined all the procedures known up to that time to fix an image on a metal plate containing silver halide and the oldest photo dates back to that time.

The technical evolution of the cameras was connected to the improvement of the photosensitive support and the optical system meant to obtain images as clear as possible; for this purpose, in the second half of the 19th century, lenses were improved and they were calculated and made by illustrious opticians.

An important landmark in the evolution of cameras was the year 1884 when George Eastman managed to produce the first “roll film” flexible sensitive support which allowed the miniaturization of the so-called camera. In 1888, Eastman made a device adapted to the new sensitive support. The evolution of the photographic devices took into consideration the improvement of lenses and the accuracy of adjustment mechanisms that ensured the exposure times, the clarity of image and the light quantity (influenced by the opening of diaphragms).

After the appearance of the digital technique in taking photographs (to which are added the possibilities of fast transmission of images), the classical cameras that used photosensitive plates or films have become collection objects.

The issue approached by Romfilatelia illustrates on the postage stamps antique cameras belonging to the collection of the Technical Museum of Bucharest. Mention must be made of the fact that two stamps reproduce the images of cameras that were donated by the founder of theTechnicalMuseum, Dimitrie Leonida, and his wife, Iulia Leonida.

Goldmann bellows camera (Austria) is illustrated on the postage stamp having the face value of 0.50 lei. Designed to take photos on 18×24 cm plates, the device manufactured around 1900 is the product of Goldmann RA Fabrik Photographischer APPARATE Company set up in1888. This high quality camera was used successfully by both amateurs and professionals.

Manufacture D`optique E. Suter camera, Bale (Switzerland) is illustrated on the postage stamp having the face value of 0.80 lei. A Swiss product from the second decade of the 20th century, the device was made by Optische Anstalt E.Suter AG Company whose existence was mentioned until 2005. The device was donated by Iulia Leonida (the second wife of Dimitrie Leonida) to Serincu Stefan (a former employee of the museum). He donated it to theTechnicalMuseum in 1982.

Plaubell Makina camera (Germany) is illustrated on the postage stamp having the face value of 1.40 lei. The device was manufactured in the second decade of the 20th century by Plaubell GmbH Company set up in 1902 by Hugo Schrader. At the beginning of its existence, the company produced and traded very high quality lenses. A bellow-type camera, Plaubell Makina had a focalization telemeter. The manufacture of Plaubell cameras stopped in 1953.

Ernemann Tropen-Klapp camera (Germany) is illustrated on the postage stamp having the face value of 2.00 lei. Manufactured in the third decade of the 20th century, it is a Tropen Klapp foldable camera (tropical) produced by Ernemann company, one of the most prestigious firms in the field having its factory inDresden. The device reproduced on the postage stamp belonged to Dimitrie Leonida.

Balda Pontina camera (Germany) is illustrated on the postage stamp having the face value of 2.10 lei. Manufactured in the fourth decade of the 20th century, the device belongs to Balda-Werk manufacturing company. After the Second World War, Balda, just like as many other companies fromDresden, was nationalized under the Russian authority. Max Baldeweg set up a new company also called Balda (Balda Kamera-Werk) headquartered inBünde,West Germany.

On the postage stamp having the face value of 14.50 lei is illustrated Welta camera (Germany). The apparatus manufactured in the fourth decade of the 20th century was produced by the German company Welta set up in 1914 as Weeka-Kamera-Werk. After the war, Welta improved the old models since it had been reorganized as a state company (Veb Welta-Kamera-Werk).

Rolleiflex camera (Germany), made in 1961, is illustrated on the “first day cover” of the issue. It was manufactured by the German company Franke & Heidecke since 1929 and later by Rollei-Werk. It has two lenses: Carl Zeiss Jena Tessar (3.5/75 mm) and Heidsomat (2.8/75 mm). High quality photos were taken with this kind of camera.

We thank “Dimitrie Leonida” Technical Museum for the documentary support granted in the accomplishment of this postage stamps issue. 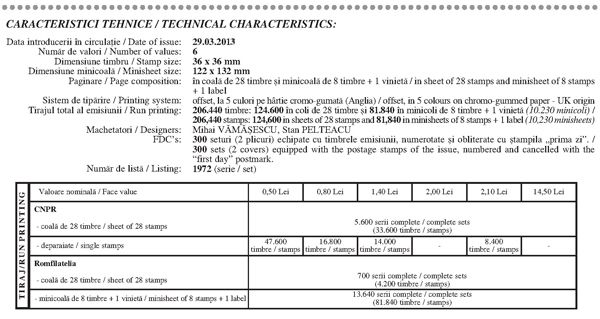