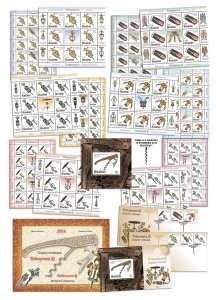 Romfilatelia’s latest project brings to the public’s attention an interesting and original topic, corkscrews, presented through the passion of collecting, in a special graphic illustration.

The hobby of collecting is special, and includes, among others things, emotion, enthusiasm, and especially consistency. The world’s largest collection of corkscrews covers these aspects, is located in Bucharest and was certified by Guinness World Records in 2015, meantime surpassing 26,000 different pieces.

Seven of these pieces are to be found on the new postage stamp issue Romanian Collections: Corkscrews (I), available starting on Tuesday, October 18th, 2016, at Romfilatelia’s stores in Bucharest, Bacau, Brasov, Cluj-Napoca, Iasi and Timisoara. The corkscrews reproduced on the issue’s stamps are distinguished by the technical principle of removing the stopper, the aesthetics aspect or a combination of the two, but also by an extraordinary variation of patents, designs and the materials they are made of.

Thus, on the stamp with the face value of lei 1.80 is represented a corkscrew of Italian provenance, which portrays the god Bacchus as a child, straddling a barrel, drinking wine and partying with two satyrs. It is estimated that it was created in the 19th century.

The stamp with the face value of lei 2.20 presents a cage corkscrew dating from the second half of the 18th century. The model is French and is one of the oldest types of such instruments. Cage corkscrews are very rare and are made of ivory, wood, iron or silver. The illustrated piece is made of a thin sheet of metal, rolled and glued by brass plating.

The stamp with the face value of lei 2.70 illustrates a mechanic corkscrew, whose value is given, mostly, by the origin of the metal it was created from. It was made of metal from the foot of the old London Bridge, built in 1176 and demolished in the early 1830s. It is inscribed: “Made from the iron shoe that was taken from a pillar that was 656 years in the foundation of old London Bridge, by I. Ovenston, 72 Gt. Titchfield St., London”.

On the stamp with the face value of lei 3.50 is reproduced a collapsible corkscrew, “lady legs” type. This type of corkscrew started being produced in Germany since 1873 and experienced a variety of materials and colour combinations. This rare version with boots turned inwards, in opposite to the usual pieces, was patented in 1894, in Germany, and is inscribed on the rod with “D.R.G.M. 28284”.

The stamp with the face value of lei 4.50 represents a double lever corkscrew, shaped like an owl, which is among the most sought after American corkscrews of the 20th century. It was produced and patented on April 26th, 1938, by Richard G. Smythe. To extract the cork, it is necessary to press the two arms of the lever until they are close to the body of the corkscrew.

On the stamp with the face value of lei 8 is illustrated a corkscrew made in the second half of the 19th century in the Netherlands. It is made of silver and embodies an angel or cherub.

The souvenir sheet, having the stamp with the face value of lei 16, illustrates a waiter’s corkscrew, which is inscribed, thus becoming a kind of advertising support for sparkling water and Georg Fleischer’s factory in Brasov.

The special product of the issue is the philatelic album, created into a limited edition of 250 pcs. and equipped with the imperforated souvenir sheet of the issue, having an illustrated attachment with graphic elements in gold foiling and the set of two first day covers with the “first day” postmark clearly imprinted in gold foiling. Each element is numbered from 001 to 250.