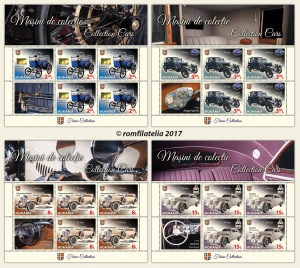 The passion for the rare four wheel beauties of Mr Ion Tiriac turned into a real gallery dedicated to vintage cars.

The only personal gallery that we find open in Romania, brings together over 160 models, which belong to the world’s most important carmakers.

At Tiriac Collection one can admire some of the most beautiful cars and motorcycles, built since 1899, as well as performance models with a current design. The Tiriac Collection includes notorious brands such as Jaguar, Aston Martin, Ferrari, Porsche, Cadillac, Rolls-Royce and more.

Produced in 1899, Hurtu 3 ½ Quadricycle, the oldest car of the collection and one of seven copies that are still available today, is illustrated on the stamp with a face value of Lei 2.20.

Exceptionally, this car has been preserved and maintained in a castle in France until 1995. Although some original car parts have been replaced, the most interesting part of the car, the chassis plate, has remained intact, a real jewel.

Delage Type CO, built by the company of the same name in 1920, is represented on the stamp with face value of Lei 3.50.

Delage was a luxury automobile company founded in 1905 by Louis Delage, in Levallois-Perret near Paris. At the beginning of the 20th century, Delage was a sporting brand that produced high-performance cars.

Street models benefited from the technological developments of the competition models, and the brand had earned its reputation for meeting the demands of its wealthy customers in terms of comfort. For this type of customer, Delage designed the Type CO, whose development was interrupted by the start of World War I.

Delage Type CO, built in 1920, has 24 hp and is equipped with an in-line 6-cylinder engine and a 4-speed manual gearbox.

Duesenberg Model J Torpedo Berline Convertible is a luxury car designed to compete with the most luxurious and powerful cars in the world. It was built as a successful American competitor for prestigious European brands such as Mercedes – Benz, Rolls Royce or Hispano – Suiza and is illustrated on the stamp with the face value of Lei 8.

Duesenberg Motors, sometimes called “Duesy,” was founded by the brothers August and Frederick Duesenberg, in 1913, in Saint Paul, Minnesota, where they built racing cars and luxury American cars.

The J engine was designed like the racing engines of the 1920s and, though designed by Duesenberg, was manufactured by Lycoming.

The emergence of this car shook the automotive industry in the United States and stopped even the transactions that were being made at the New York Stock Exchange.

The bodywork of the Duesenberg model within the Tiriac Collection was made by Walter M. Murphy Coachwork. It is one of the two models produced in the form of a convertible sedan. However, the other body was modified by the owner, turning the car into one with a fixed roof, the one hosted at Tiriac Collection becoming, therefore, unique.

Cord 812 Custom Beverly, with a 170 hp, V8 engine and a 4-speed manual gearbox, was noted for its innovative technology and sheer design. Cord was the name of cars built by Auburn Automobile Company in Connersville, Indiana from 1929 to 1932 and then from 1936 to 1937.

Chief designer Gordon Buehrig gave the new Cord 812 a dramatic design that has become a symbol of sporting wear and style, making most of the other cars look quite outdated.

Modern technical features for that time made the Cord an advanced car for its time thanks to the Bendix semi-automatic four-speed gearbox, front traction, independent suspension and hidden headlights.

The presented car is certified by A.C.D. Certified Category 1 Original, which means that all components are genuine Cord 812, and is illustrated on the stamp with the face value of Lei 15.

Romfilatelia thanks the Tiriac Collection team for the documentary support granted in the creation of this postage stamp issue. 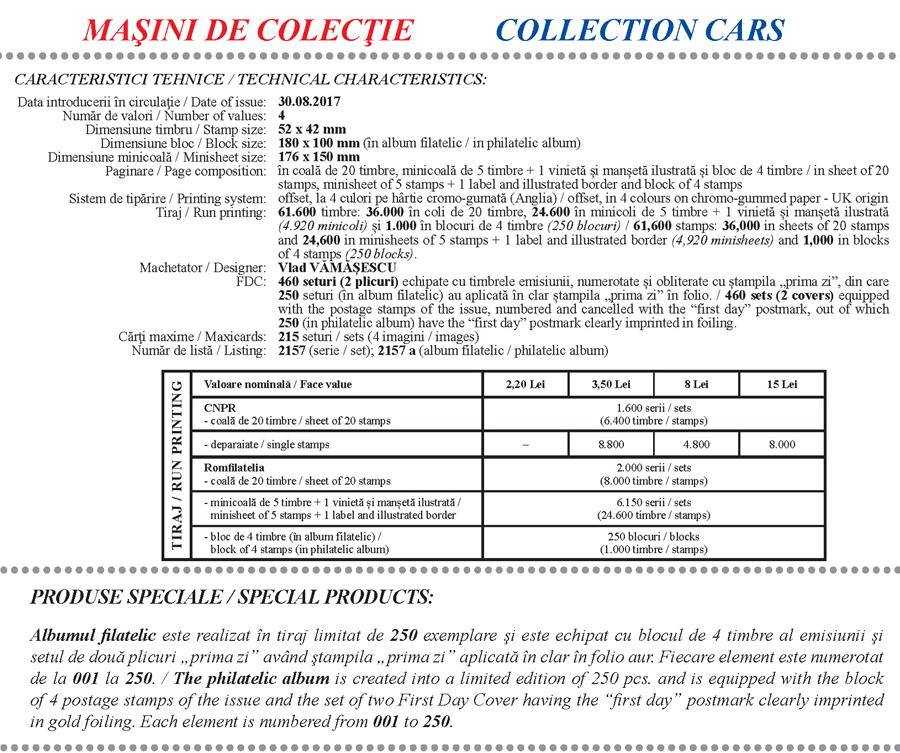