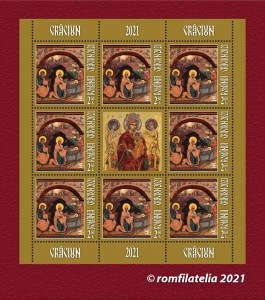 On the occasion of the Holy Celebration of Christmas, Romfilatelia introduces intro circulation on Friday, November 19th, the postage stamps issue Christmas 2021.

Christmas marks a great celebration of Christianity. On this day is celebrated the birth of the Savior Jesus Christ and the fulfillment of the promises that God, in the garden of heaven, initially, then through the prophets of the Old Testament, made to mankind – to send the Messiah, the Anointed One, who would save the world from the bondage of sin and death.

The philatelic issue dedicated to Christmas has as a source of images the reproduction of some icons from the patrimony of Bucur Ciobanul Church in Bucharest: The Birth of Jesus Christ and the Virgin Mary, which belonged to the church iconostasis painted in 1704 and 1705 by an iconographer named Ioan.

The collection block, inserted in the philatelic folder, adds to the product design the second icon of the Virgin Mary dating from 1704 and donated to the church in 1938, on the occasion of the reopening and re-sanctification of the church on the feast of the celebration day of the Birth of St. John the Baptist.

As regards the building of the church, the inscription that has been kept until today says: “I, Mircea I Basarab, the ruler of Wallachia, Duke of Fagaras and conqueror of the land of Dobrogea across the Danube, built in 6924 (1416) the brick church to replace Bucur’s wooden church, in the forest situated on the hill near Dambovita, dedicated to Saints Atanasie and Chiril, where I laid the bones of the dead soldiers fallen in the camp where I fought against the Turks at Giurgiu on July 12th.”

The text of the inscription confirms what is known about the history of this church and its founder. According to tradition, he was Bucur the Shepherd, the legendary founder of Bucharest. Our ancestors used to erect worship houses whenever they started building their settlements. So did the shepherd Bucur about whom the great historian Nicolae Iorga said: “If the legend says that his dwelling place was on Radu-Voda hill while calling Bucur’s church the cemetery chapel of the monks Alexandru Voda Mircea’s monastery and of his grandson Radu, this means popular security kept by word of mouth from one generation to another that the fortress cradle is there”; another historian, Ionnescu-Gion states in his book entitled Istorie a Bucurestilor: “Bucur the shepherd – some people told with excitement – while shepherding his sheep on the woody hills of Dambovita built here, on the shore of the brook, a wooden little church that may be a place of worship of God for himself and for his successors”.

Around 1595, the Turks led by Sinan Pasha, after they had occupied Bucharest, burnt the church that had been built on the order of the ruler Mircea the Elder in 1416 and they raised by 2 meters the hill thereof in order to defend Radu-Voda monastery, the place from where the Turks coordinated their army. Then the church was rebuilt by the monks of Radu-Voda monastery during the leadership of abbot Atanasie (1626 and 1632-1645) to serve as an ossuary and chapel of monastery cemetery. The church was rebuilt on its older foundations while keeping the previous sizes but it was elevated by two meters as compared to the initial level. Therefore, nowadays the believers who wish to pray in the old church of Bucur the shepherd situated at 33, Radu-Voda Street, must go up the 33 steps reminding us of the age of our Savior Jesus Christ when he was crucified, raised from the dead and went up in the sky. From the beginning of the 19th century until June 24, 1938, the church was in an advances state of degradation; therefore, it was closed down by the Historical Monument Committee. In 1909 and 1910, with the help of the architect Grigore Cerchez, the church porch, the steeple and the dome were restored (giving up the small wooden porch that also served as a steeple) while keeping the Brancoveanu architectural style though. The church was also adorned with sculptured stone frames of the door and frameworks of the window, and of the sculptured oak wood entrance door. Repairs were carried out between 1931 and 1938 (by courtesy of Stefan Palaghita and Ioan Udroiu families) with the Blessing of the first Romanian patriarch Dr. Miron Cristea and under the coordination of Dr. I. Matei and priest Dr. I. Felea. With the support of the members of Patriarch Miron’s Brotherhood, especially of Mr. Octavian I. Dobrin, the first reeve and builder of the church, the holy place of worship was reopened and given back to the cult, while the consecration ceremony was officiated by His Holiness Veniamin Pocitan Ploiesteanul on the celebration day of the Birth of Saint John the Baptist in 1938. Thus, “the ancient church of Bucur, which had been deserted and closed down for so many years on the green hill near Dambovita – as the press of that time wrote –, reopened its gates due to a laudable godliness initiative”. Extended works of consolidation and restoration of the church and of the hill where the church was located started in the summer of 2007. As the hill almost 7 meters high was in danger to collapse towards the east (towards Splaiul Unirii), its reinforcement became necessary by 160 bore holes in which 150 concrete pillars were cast, the rest of bore holes being filled with stones to drain rain waters.

On the 80th anniversary since the previous re-consecration, with the High Blessing of His Holiness the Patriarch Daniel, on June 24, 2018, on the celebration day of the Birth of Saint John the Baptist the Holy Father Timotei Prahoveanul, accompanied by a group of priests and deacons, officiated the consecration ceremony of the holy church about which Johann Filstich wrote in his book Incercare de Istorie Romaneasca (The Attempt at Romanian History), written between 1728 and 1740, to the advice of the ruler Constantin-Voda Mavrocordat: “The name of this city, Bucharest, as it is called in Wallachia, comes from a hermitage situated on a hill near the Danube river, built by a shepherd who was living there and bore the name of Bucur, his name being given subsequently to the town that was filled with inhabitants, namely Bucuresti.”

Mention must be made of the fact that the church belonging to the Deanery of the 4th District of our Capital city contains an impressive museum collection having icons from the end of the 18th century and the beginning of the 19th century.

Romfilatelia thanks His Beatitude Father Daniel, the Patriarch of the Romanian Orthodox Church, the Archdiocese of Bucharest, the Radu Voda Monastery and the Bucur “Ciobanul Church” in Bucharest, for the support granted in the accomplishment of this postage stamps issue. 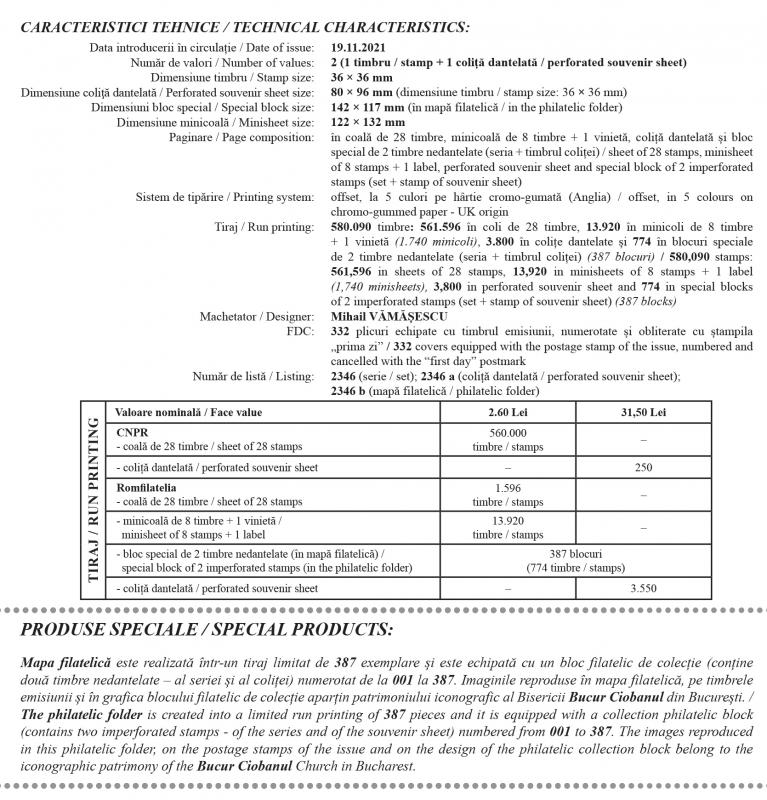