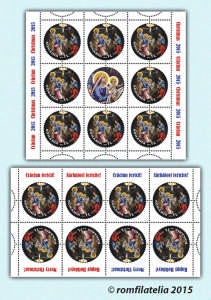 The Feast of Nativity, popularly called Christmas, is one of the major Christian feasts and is celebrated with great solemnity every year on December 25th.
This celebration marks an important event in the history of Christianity, the birth of Jesus Christ from the Virgin Mary, in a cave in Bethlehem of Judea. According to the New Testament Gospels, Jesus Christ was born in the city of Bethlehem, where Mary, mother of Jesus, accompanied by her fiancé Joseph, came from Nazareth for the census ordered by proconsul Quirinius, during the time of Emperor Octavian Augustus. Finding no room in the city, they were housed ina pastoral cave where the Holy Child was born.
This feast of the joy of mans encounter with God is celebrated around the world by different religious traditions, as well as secular ones.
Christ the Lord, who was born as a man in the cave in Bethlehem of Judea, is the eternal Son of God, the incarnate Logos, He in, through and for whom heaven and earth, the whole universe were made.
This truth, which marks the confession of the Apostles, is the foundation of the Christian faith, a truth enjoyed by Christians everywhere, celebrating each year the beginning of mans communion with God.
On the occasion of the Sacred Feast, Romfilatelia marks this important event for the whole of Christianity, as well as the Romanian peoples culture, by the CHRISTMAS 2015 postage stamp issue. This year, the stamp of the issue depicts the image of the Birth of Jesus icon, painted by Gheorghe Tattarescu.
Gheorghe Tattarescu was born in Focsani, in 1820, and the one who initiated him in the art of painting was his uncle, Nicolae Teodorescu, a church painter. Young Tattarescu began his apprenticeship helping his uncle, later following courses at the School of painters, founded by Bishop Chesarie in Buzau.
A pioneer of Neoclassicism in Romanian painting, he studied during 1845-1851 at the San Luca Academy in Rome, the place where he was initiated into the secrets of fine arts.
After several years of studies, Gheorghe Tattarescu returned to his country, becoming one of the largest participants in the countrys artistic life.
Tattarescu was the most important Romanian religious painter, his creation being found in 58 churches, among which we mention those in Bucharest: St. Spiridon the New, Coltea, Zlatari, Cretulescu, Enei.
The master iconographer has created a personal style, influenced by the Italian academicism and the Byzantine iconography, thus his representations depict real characters, well drawn, with the features of a living being.
The icon of the Nativity of Jesus, illustrated on the stamp with the face value of lei 1.00 is part of the heritage of the Gavrila Simion Institute of Eco-Museum Research Centre in Tulcea, the Institute being named after the great Romanian archaeologist who led a veritable campaign to develop the museums of Dobrudja.
Dating from the 19th century, the icon of the Nativity of Jesus, created by Tattarescu, distinguishes itself by the sense of measure, the clarity of its compositions, through the skill and the design finesse, as well as the sober colors and the dignified expression of the characters. Tattarescu uses the oil painting technique, one of the oldest and most popular painting techniques. The icon is surrounded by a golden and narrow frame, and on the right, Joseph and the Virgin Mary, who kneels and holds the child Christ in her arms are presented. Through the clouds the guiding star shines into the manger, the long awaited sing by the Magi who welcomed the worlds Emperor with gold, myrrh and frankincense. The dark background, similar to the chiaroscuro technique, lets shine the red, yellow, blue and white colors from the characters faces and clothes.
The birth of the Savior Christ is, in the words of St. Grigorie the Theologian, not a celebration of creation, but a celebration of recreating the world.
On the occasion of this Holy Feast, the team of Romfilatelia wishes a warm Happy Holidays to all of you, the friends of stamps! May this sacred period find you beside your loved ones, surrounded by Christmas caroling and lots of cheer!

Romfilatelia thanks the Gavrila Simion Institute of Eco-Museum Research Centre in Tulcea for the documentary support granted in the creation of this postage stamp issue. 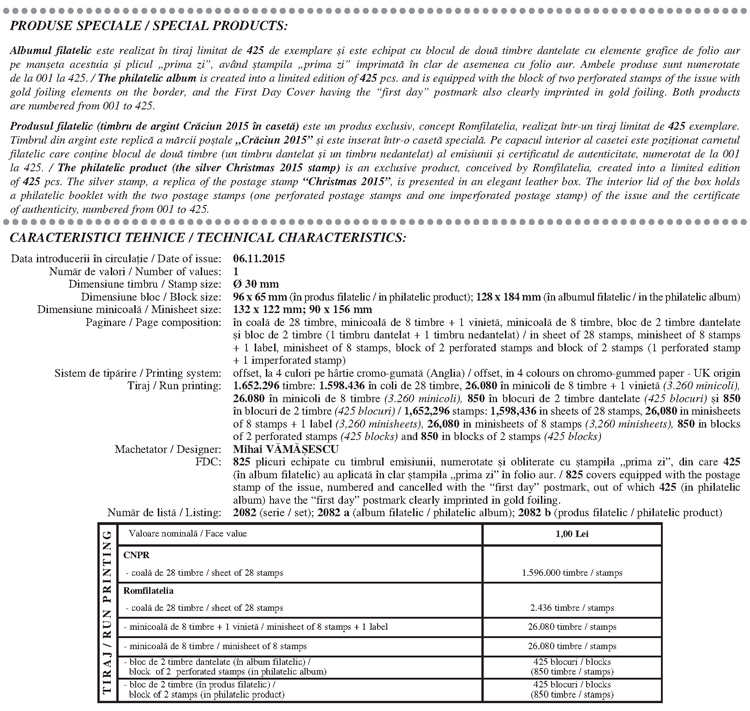