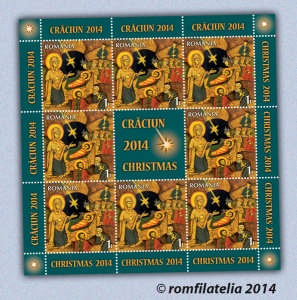 On the occasion of the Holy Feast of Christmas, marking for Christians all over the world the birth of our Saviour Jesus Christ, Romfilatelia introduces into circulation the postage stamp issue Christmas 2014, consisting of a stamp that reproduces the image of an icon with the birth of Jesus Christ our Lord, belonging to Stavropoleos Monastery in Bucharest.

The church of Stavropoleos Monastery was erected in 1724 by the Greek Archimandrite Ioanichie. Coming to Bucharest from Epirus in 1722, he first built an inn, and then, for the merchants and travellers of that time, also constructed a church in the inn-yard. The monastery was founded in the nearby buildings, with a community of Greek monks.

The votive inscription above the entrance door, written in Greek and Romanian, witnesses that the building of the church was completed on October 30th, 1724.

The church is built in the 18th century Wallachian architectural style, with all the stylistic details characteristic of the Brancovenesc art tradition.

The façade is adorned with a row of medallions surrounded by vegetal decorative motifs, which extend to the arches whose form recalls the Oriental architecture. The precinct, raised in the early 20th century after the plans of architect Ion Mincu, on the site of the old inn, follows the same decoration pattern for the portico upheld by columns, which surrounds the courtyard on three sides.

Nowadays, the precinct houses the cells, the priory as well as the collection of church objects, the library and the refectory. All of them can be visited, offering a testimony of the old ecclesiastic tradition and art to all interested people.

Among the icons preserved in the church and those belonging to the collection of the monastery, there are three icons illustrating the Nativity of the Lord. The first one is part of the iconostasis register of feast icons, while the second is a portable feast icon, painted on both sides, with the Circumcision represented on the other side. It belongs to a painted series made, according to the inscription “by the hand of Ioan ereu. 1776”. The third icon illustrating the Nativity is from the 19th century and is painted in a traditional style.

The image reproduced on the Christmas 2014 postage stamp illustrates the third icon, painted in tempera on wood, in which the Mother of God is presented alongside Jesus-child, in the manger inside the cave. The magi bringing gifts, the shepherds and the Righteous Joseph complete the composition which summarizes this great event of the Christian world: the Nativity of the Lord.

We thank His Beatitude Daniel, Patriarch of the Romanian Orthodox Church, the Archdiocese of Bucharest and the Stavropoleos Monastery for the support granted in the accomplishment of this postage stamp issue.
Issue date: 2014-11-21 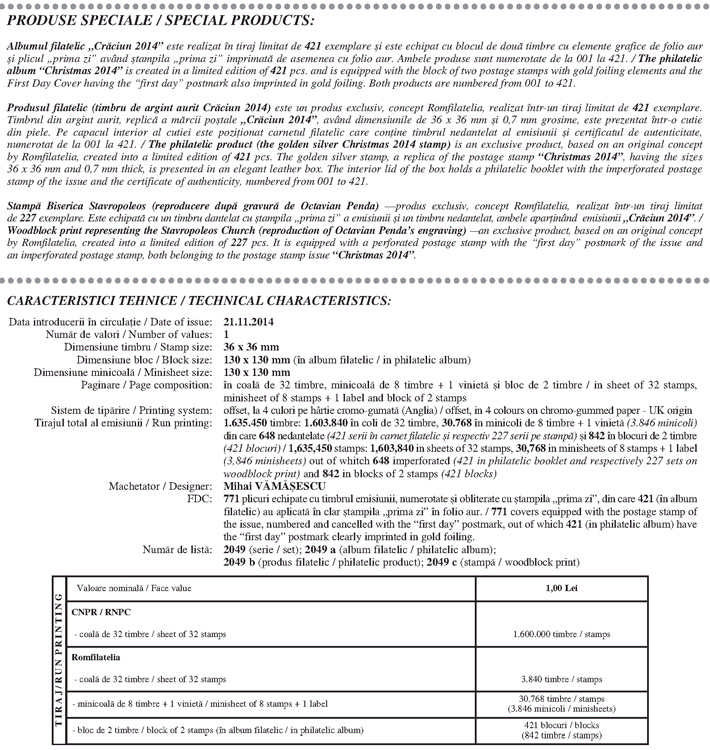