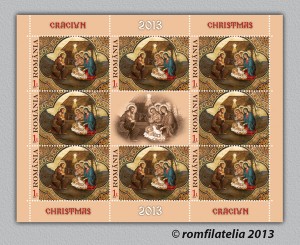 In the Orient, until the second half of the 4th century, the HolyChurchused to celebrate the Birth of Our Lord on the same day with the Baptism of Our Lord, namely on January 6th, this double celebration being generally called the Epiphany. The Birth of Our Lord holiday was celebrated separately as of 379 when Saint Gregory of Nazianz delivered a festive preach in Constantinople, which was a source of inspiration for the making of the Birth of Our Lord Canon by iconographer Cosmas of Maiuma. A couple of years later, on December 25th, 386, Saint John Chrysostom brought convincing arguments, during an exhortation delivered inAntioch, sustaining the importance of this holiday in the Christian cult.

For all Christians, the Birth of Our Lord is God’s gracious and reverent love mistery for people. The incarnation of God’s Son, Who became a Human Being out of an endless love for the people, is the foundation and core of the Christian religion.

After meticulous researches of the historical documents and the events reported by these, Saint Dionysius Exiguus (the Small) established the year 755 since the foundation of Romeas the year of Our Lord Jesus Christ birth. This year is called nowadays the New Year of the Christian epoch, and the holiday of December 25th has become the “Holiday of Holidays”, as John Chrysostom called it.

As for the word Crăciun (Christmas), it is the result of many transformations originating in the Latin word creatione (pronounced creacione), then followed by the linguistic modifications creacion, creaciun and finally crăciun (krakun in Bulgarian).

For Christmas 2013 postage stamps issue, introduced into circulation by Romfilatelia, were used images and icons belonging to Brancoveanu Settlements Patriarchal Chapel Domniţa Bălaşa Church fromBucharest. The first foundation of Domniţa Bălaşa, the daughter of the martyr ruler Constantin Brancoveanu, together with her husband, the great ban Manolache Lambrino, was built between 1743 and 1744.

On September 29th, 1885, when the church, which was the 4th place of worship erected on the same place, got the aspect it has today, Constantin Bacalbasa described the moment in the journals of that time as follows:

“The church was rebuilt in 1831 by the ban Grigore Basarab Brancoveanu, rebuilt again in 1838 by the ban’s wife Safta Grigore Basarab Brancoveanu. In June 1881, they were rebuilding Domniţa Bălaşa Church for the fourth time. After the mass had been said by the metropolitan bishop, they signed the commemorative document of the building. This document was sealed into a glass tube, where they also put a new piece of all Romanian metal coins of that time, from one ban (approx. farthing) coins up to golden coins of 20 lei. The tube was then wrapped in paper sheets belonging to all newspapers that came out in Bucharest and then placed into another metal tube. The king, the queen, the metropolitan bishop and the court ladies received a white satin apron with golden tassels. Then, by using the silver tools he had been given, the king laid the first brick on the foundation stone under which the tube was sealed, the second brick was laid by the queen, the third brick was laid by the metropolitan bishop and so on. The architect of the church was Alexandru Orascu…”.

The destructions caused by the bulldozers of the totalitarian regime resulted in the demolition of the hospital and the settlements, and the statue of Domniţa Bălaşa, taken out from its old location, was placed in the church courtyard after 1989.

The image reproduced on the stamp with the face value of leu 1 belongs to an icon from the heritage of Brancoveanu Settlements Patriarchal Chapel Domniţa Bălaşa Church, which also houses the worship place’s first founder tomb.

We thank Brancoveanu Settlements Patriarchal Chapel Domniţa Bălaşa Church for the images provided to the accomplishment of this postage stamps issue. 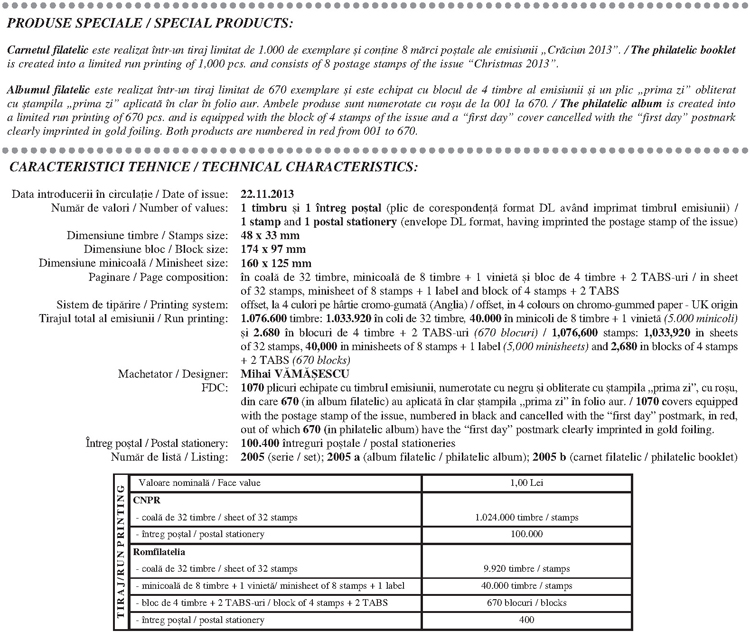