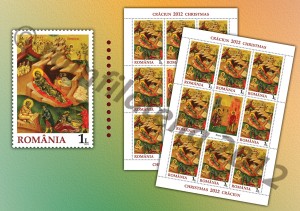 Written in the Orthodox calendar, The Birth of our Lord, a celebration of light, joy and happiness, may be found each year among the themes of postage stamps issues that Romfilatelia introduces into circulation…

Seven centuries before the birth of Jesus Christ, the visionary prophet of messianic hope, Isaiah, wrote:

“For unto us a child is born, unto us a son is given: and the government shall be upon his shoulder: and his name shall be called Wonderful, Counsellor, The mighty God, The everlasting Father, The Prince of Peace.” (Isaiah, 9:6).

Written in the Orthodox calendar, The Birth of our Lord, a celebration of light, joy and happiness, may be found each year among the themes of postage stamps issues that Romfilatelia introduces into circulation under the name “Christmas”.

This year, the postage stamp of the issue illustrates the image of the icon having as a topic The Birth of our Lord belonging to the register of religious festivals from the iconostasis of Radu Vodã Monastery in Bucharest. At the same time, on the lables there may be seen the images of Annunciation and Jesus in the Temple icons, which are part of the same Baroque iconostasis.

Radu Voda Monastery having as dedication days The Holy Trinity and the Saint Hierarch Nektarios of Aegina keeps within its walls the mark of four and a half centuries of history of the religious house, the city and its believers.

The construction of the monastery started in the second half of the 16th century, as a foundation of voivode Alexander II Mircea (1568-1577) and princess Ecaterina, and it was finished by their son, Mihnea II Alexander Voivode who also gave a huge fortune to the monastery.

In 1595, the monastery is burnt down by the Ottomans of Sinan Pasha retreating in front of the armies of Michael the Brave and it wouldn’t be restored until 1613-1614 by voivode Radu Mihnea (1601-1602, 1611-1616, 1620-1623). He was the second founder of the monastery who rebuilt it on its former foundations, according to the blueprint and elevation of the former edifice and he supplemented the monks’ cells with buildings where messengers were hosted and which were subsequently used as royal residences. The church would be painted by his son and successor to the throne, Alexandru Coconul (1623-1627).

The monastery has gone through numerous repairs, reconstructions, modifications and improvements in the centuries to come. Among these we mention the demolition of the interior walls and the building of the Theological Seminary, in 1893, on the South side of the edifice. The last significant restoration works were carried out between 1967-1974 when the edifice was given back its initial architectonic shapes, modified towards the middle of the 19th century in the Neo-gothic style in fashion at that time. The works were coordinated by the architect Stefan Bals blessed by Patriarch Justinian Marina. The latter is considered as the third founder of the monastery, the one who gave it its former appearance and fame.

The blueprint and architectonic shapes of Radu Vodã church are inspired from the ones of the Episcopal church in Curtea de Arges. The plan is triconch with a steeple on the nave and a wide antenave covered by three steeples, out of which the main one stands on twelve columns symbolizing the twelve apostles. The facades, divided by a belt into two unequal height registers, have a simple decoration consisting of alcoves with archivolts that nicely alternate with white surfaces.

In the antenave, there are 24 stone tombs that are old resting places of the founders and some boyars from the 18th-19th centuries. The tomb of the founder Radu Voda Mihnea is on the South side of the area between the antenave and nave (in the burial vault), and on the North side there is the tomb of Patriarch Justinian (1977), the third founder of the church.

The postage stamps of the issue “Christmas 2012” will accompany the thoughts and greetings written on hundreds of thousands of letters and postcards reminding all Christians of the Great Orthodox Feast always associated to hope for peace, health and wealth.

We kindly thank His Beatitude Daniel, the Patriarch of the Romanian Orthodox Church, the Archbishopric of Bucharest and Radu Voda Monastery in Bucharest for their support in the accomplishment of this postage stamps issue.
Issue date: 2012-11-15 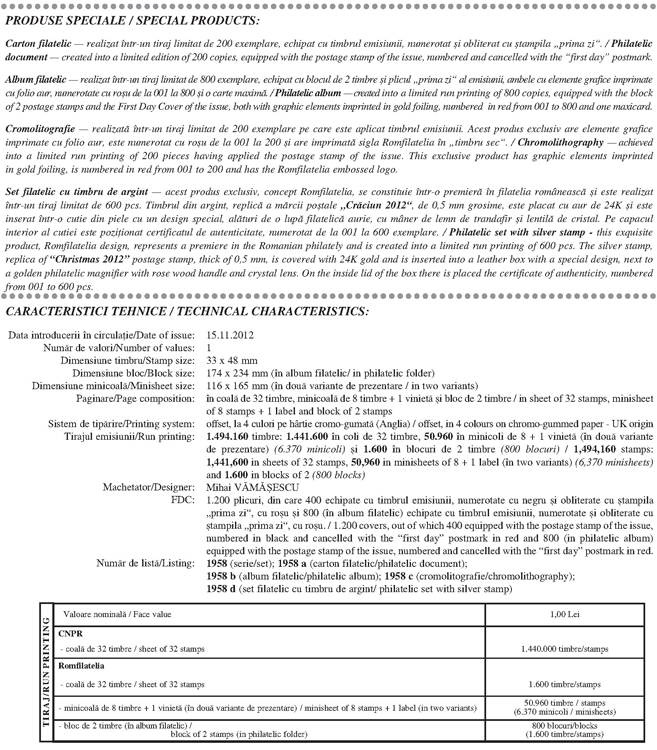