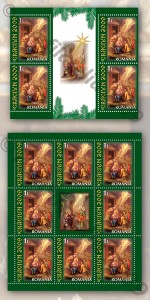 The dedication day, Buna Vestire, of the Church, was given by Mircea Ciobanu, and after the fire of 1847, the Church received its second dedication day, Saint Anthony the Great.
Saint Father Anthony was born in Come, in Egypt, in 251. His parents, prosperous Christian peasants, died when he was 18 years old. Hearing in the church the word of the Gospel, he gave his fortune to the poor and he secluded himself from society.
For 20 years, between 285 and 306, he settled down in a deserted fortress on the right bank of the Nile. After this ascesis period, he became the spiritual father of many monks from different monastic areas of the Egypt deserts, the most famous ones being Nitria and Schitia.
Around 312, he settled down on Kolzim (Qolzum) mountain, close to the Red Sea border where a monastery was built.
Until his death, in 356, he did not leave this place except to meet his disciples and to make a journey to Alexandria to support Saint Atanasie the Great, his disciple, in the defense of orthodoxy. The latter, after St. Anthony´s death, wrote the book “Anthony´s life”, a text that would become one of the fundamental papers of the monastic literature, both in the Orient and the Occident.

For the documentary consultancy given in the accomplishment of this postage stamp issue, we warmly thank The Romanian Patriarchy and to the humble servants of Buna Vestire Church – St. Anthony the Great – “Old Court” of Bucharest.

Should God give luck,
Luck and joy
To all Romanians
And also wealth and cheerfulness!

Romfilatelia team heartedly carols you, the stamps lovers and wishes to you all Merry Christmas!