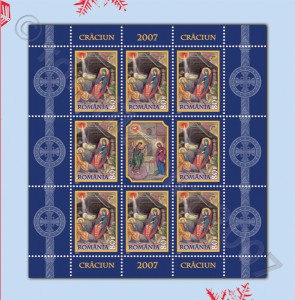 On the postage stamp of the philatelic issue we see the image of the icon Birth of Jesus Christ, while the label of the postage stamps sheet envisages a different icon, whose subject is Annunciation.
The two icons are part of the patrimony of the Scaune (Chairs) Church in the centre of Bucharest, located in the proximity of Coltea Hospital.
The Scaune (Chairs) Church was built approximatively 400 years ago (1611), in the location of the butchers´ slums that used to cut meat on large wooden blocks commonly known as “chairs”. The church wad built following the initiative of the members of the guild and it has ever since been associated with the Butchers´ and Soap makers´ Church, or the Scaune (Chair) Church, church patrons being Birth of Virgin Mary and the Assumption of the Virgin.
In 1843, the church was restored by Cup-bearer Ioan Costacopolu who
painted and plastered the exterior.
We are unaware of the name of the painter as well as the date when the original fresco was made. The painting has however, an important artistic significance. In 1944 it was washed and restored by the painter Gheorghe Popescu.
Between 1910-1944, no religious service was performed in this religious monument and the church closed and forsaken, which degraded it to ruin.
In 1939 the restoration of the church commenced and, in 1944, it was unveiled when a layer of soil over one meter was removed. In August 1944, the church opened its gates to welcome believers, and, on September 8th, it was again consecrated, occasioned by the celebration of the Birth of Virgin Mary.

Good luck, may God bless you
Good luck and cheerfulness
To all Romanians around you
Galore and pleasantry!

The team of Romfilatelia sincerely, sings a Christmas song for you, stamp lovers, and wishes you all 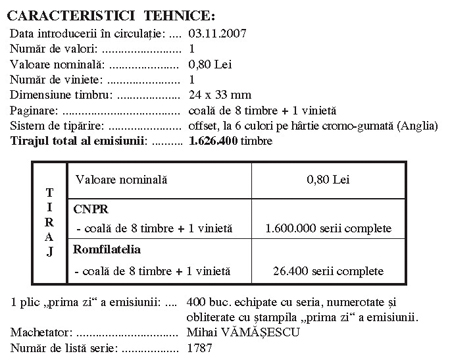