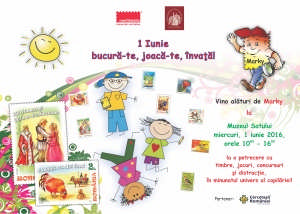 “Childhood never disappears from us; it becomes a continuous spring from which all of life’s turns come forth.” (George Calinescu)

June 1st marks one of the most loved holidays, cherished by both children and adults and celebrated all over the world in the first day of summer. International Children’s Day is a day of joy and happiness, of appreciation, celebration and return to one of the most beautiful time in a man’s life – childhood. It is the day when the main role is given to children of all ages and nationalities, the day which reminds to a whole world about the importance of love, education, protection and interest we all need to give to children.

In 2016, Romfilatelia celebrates International Children’s Day together with the heroes of childhood, those stories characters that have enthralled us and fascinated us with their adventures and lessons, that have shaped our character and helped us gain many abilities that prove useful in the adult life. The postage stamp Childhood’s characters thus brings to the forefront some of the beloved characters of our childhood: Prince Charming and Ileana Cosanzeana, Neghinita, Mr. Goe and the heroes of the Two penny bag. The four stamps of the issue can be purchased starting with Wednesday, June 1st, 2016, in Romfilatelia’s stores in Bucharest, Bacau, Brasov, Cluj-Napoca, Iasi and Timisoara.

Illustrated on the stamp with the face value of lei 2, the Two penny bag, by Ion Creanga, is one of the best known and much beloved stories of childhood. Laden with archetypes, the story of the bag sets in contrast the kind old man and the mean old lady, the hard-working rooster and the greedy nobleman, providing the child an entire collection of characters from which to learn good from bad.

The stamp with the face value of lei 8 depicts Prince Charming and Ileana Cosanzeana, two characters present in the Romanian folklore even from its beginning, embodying the idealization of masculinity and femininity respectively. Their best known adventures were told by Petre Ispirescu and describe a fantastic world, with obstacles and trials beyond the power of ordinary man.

The four postage stamps are completed by a first day cover, and as page composition were used the sheet of 32 stamps and the minisheet of 5 stamps + 1 label. Moreover, the children’s holiday is also marked by the creation of a thematic postal stationery.