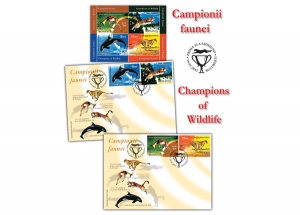 Over time, Romfilatelia created numerous stamps dedicated to animals, both wild and domestic, these projects having an educational role and also promoting the national and international fauna. The stamp thus became a means of communication, having as common denominator the image it reproduces and its impact on the viewer.The first postage stamp issue of 2015 therefore resumes one of the most popular philatelic topics, namely fauna, thus introducing into circulation the Champions of wildlife, project created in a graphic and artistic manner, which stands out through the execution technique and the rich colors of the stamps and the whole concept.

The four stamps of the issue illustrate wild animals that distinguish themselves by records and performances which make them stick out among other mammals and introduce them successfully in the did you know category:

All these features and many other interesting facts can be found in the informative leaflet which provides more details and accompanies the 4 stamps of the philatelic issue.

The issue is completed by a first day cover, and as page composition were used the sheet of 32 stamps and the block of 4 stamps.

Starting with Friday, January 16th, 2014, the postage stamp issue Champions of wildlife will be available in all Romfilatelia shops in Bucharest and countrywide.

Romfilatelia thanks the National Institute of Biology of the Romanian Academy and Corresponding Member Acad. Dr. Dumitru Murariu for the documentary support granted in the accomplishment of this postage stamp issue. 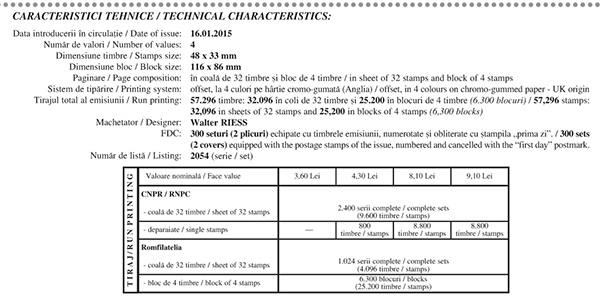