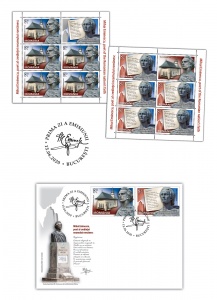 Romfilatelia continues the series of anniversary philatelic events dedicated to the Romanian national poet, born 170 years ago, by introducing into circulation, on Monday, June 15th, 2020, of the postage stamps issue Mihai Eminescu, poet of the Romanian nation’s faith.

The amplitude of Christian poet is defined by the very personal beliefs of the greatest poet of the Romanian nation, expressed in a historical phrase: “The Church is the mother of the Romanian Nation since forever”.

At the Easter celebration of 1881, Eminescu, in an article in the newspaper Timpul (The Time), wrote the following:

“And here, the flowers of spring are knocking at the gate with their soft fingers and where five hundred years ago the flocks of Bucur the shepherd were lost on the horizon of the plain, today thousands of gardens contrast in the young greenery with the walls of the churches; and the tender rhythm of the bells tells us the old and sad legend that today Christ is still in the grave, that tomorrow he will rise from the white shroud like a lily flower, raising his radiant forehead to heaven. It has been almost two thousand years since it (the Gospel) raised peoples from darkness, established them on the principle of love of neighbour, two thousand years since the biography of the Son of God is the book according to which mankind grows”.

His Beatitude Patriarch Daniel, in a speech given in 2014, at the Romanian Academy, on the occasion of the National Culture Day, stated about the poet: “Eminescu’s attachment, respect and admiration for the Church of the nation, which he always saw present in the development of the culture and national identity of the Romanian people, he acquired them from his family, from his mother’s sisters who were nuns… This is how he became acquainted with church services and songs from a very early age, reflecting them later in some of his creations, in which metaphors inspired by the orthodox liturgical universe are used, as for example in the poem Prayer”.

On choosing you Our Queen, we swear

We’ll kneel to you in humble prayer

To lift our spirits, us to save

From every haunting, lashing wave;

Pray be a shield to all

And our redeeming wall!

Your eyes that we adore

Please, down upon us draw;

As an expression of the manifestation of faith and patriotism, at the age of 20, at the great feast of the Putna Monastery, under the protection of the Blessed Virgin Mary, the poet addressed the participants as follows: “Romanians generally celebrate the day of the Holy Mary, virgin, chaste and yet the mother who from her womb gave birth to the representative of freedom, the martyr of chained humanity, Christ” – and says the poet “Christ defeated with the golden letter of truth and love, Stephen with the flaming sword of law. One was Freedom, the other the defender of the Gospel. So we will place a silver urn on the tomb of Stephen, on the grave of the pious Christian, of the great Romanian”.

Both stamps of the issue have the face value of Lei 8.50. One of them contain a bust of Mihai Eminescu located in the courtyard of the Putna Monastery, next to the image of the monastery. The other stamp is illustrated with a detail of the statue of Mihai Eminescu, which can be admired in front of the Romanian Athenaeum in Bucharest (work of the sculptor Gheorghe D. Anghel), alongside with the first verses of the poem Prayer. On the First Day Cover of the issue is reproduced the entire bust of Mihai Eminescu from the Putna Monastery.

Romfilatelia thanks the Putna Monastery and the Monuments and Heritage Tourism Administration, within the Bucharest City Hall, for the documentary support granted to the achievement of this postage stamps issue.

The postage stamps issue “Mihai Eminescu, poet of the Romanian nation’s faith” will be available on Monday June 15th  2020, in Romfilatelia’s shops network in Bucharest, Bacau, Brasov, Cluj-Napoca, Iasi and Timisoara and online on https://romfilatelia.ro/store/. The postage stamps issue is completed by “first day” cover, in sheet of 32 stamps and minisheet of 5 stamps and 1 label. 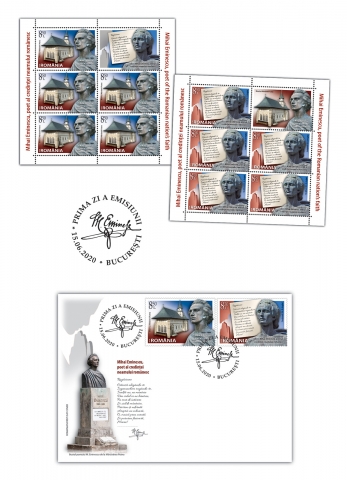 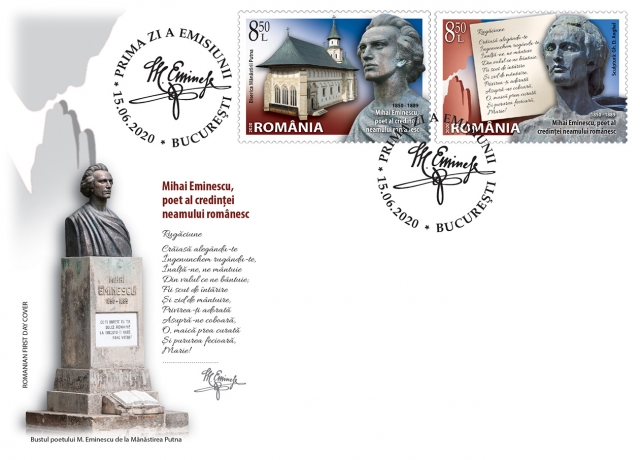 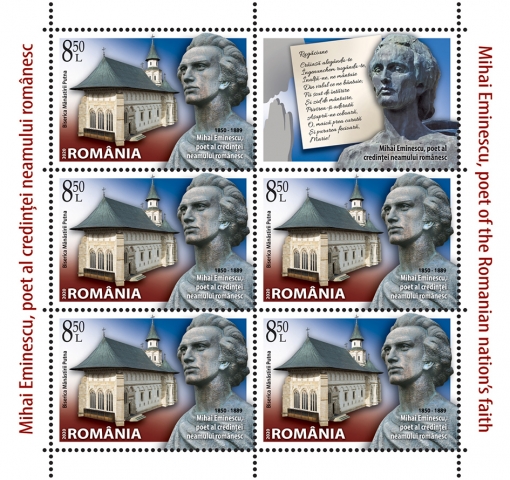 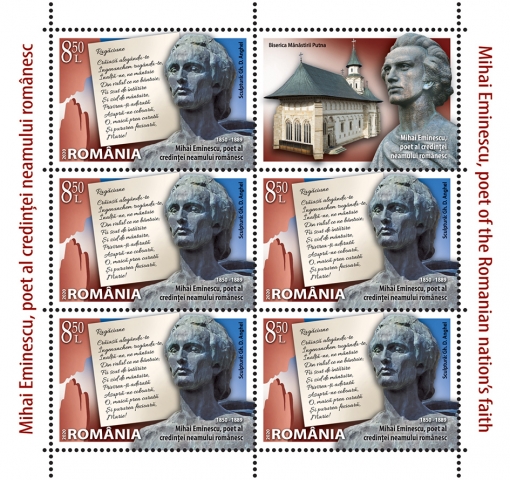 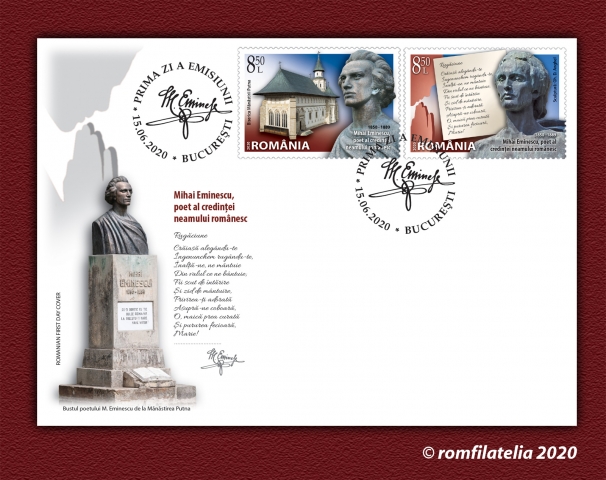 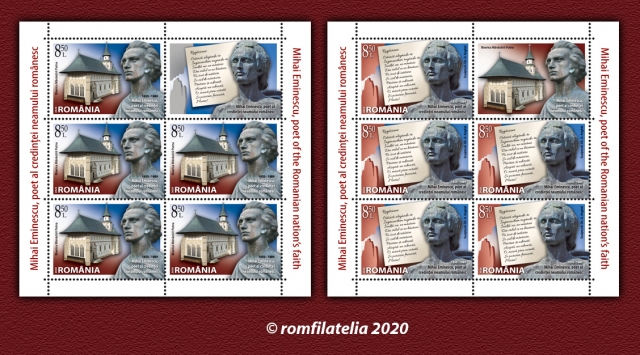 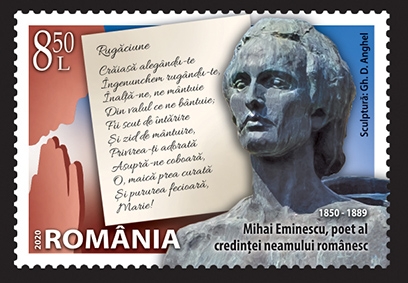 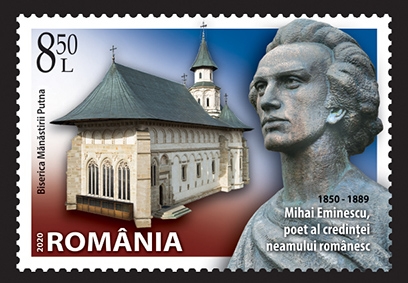