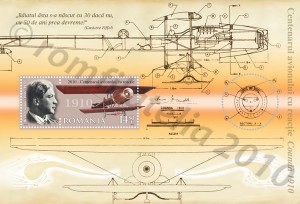 One hundred years ago, a young man proposed to the aeronautic world a revolution that might have brought future into present. He exhibited the first aircraft without a propeller with turbo thruster at the second Aeronautic Salon in Paris.

His name: Henri Coandă.
Nationality: Romanian.
Age: 24.
Education: a graduate of the Superior School of Aeronautics and Mechanical Constructions in Paris (the first class).

From the flyer made up by Coandă for the promotion of the aircraft, we may find out the construction details: maximum span – 10.30 m, wing length – 1.75 m, fuselage length – 12.50 m, total bearing surface – 32 m2, total weight in running position with a 50 HP Clerget engine and a propelling turbine – 420 kg. Wings. Construction details. Patented wings: interior steel metal fittings. The exterior is made completely of very polished and lacquered wood. Profiles, allowing for a load of 33 kilos per m2 of bearing surface in the centre, have been designed after repeated attempts on special apparatuses mounted on train platforms specially arranged for this purpose. Wings of unequal sizes. Under the wings, air channels through prominent ribs. The wings fastened to the fuselage by steel tubes having the lowest head resistance without any tensioner or cable. The weight center is quite elevated in order to ease turns… The fuselage (enclosing the engine, the tanks, the passengers), flanked by two radiators, has the thruster at its front.

This patented thruster (patent no. 416 541 from August 9th, 1910) will cause great trouble to the specialists contemporary to the inventor and also to those of nowadays. Designed under the form of a turbine driven by means of a four cylinder engine, cooled by water and manufactured by Paul Clerget, the thruster transformed the rotation movement around its spindle in a translation movement parallel to the spindle. Causing a relative vacuum, concomitantly with the increase of the air it was using, the thruster determined a decrease of pressure that followed the shortest path. Abruptly changing the movement direction of the air swirls in movement, its speed annihilated and the pressure became maximal. The design of the thruster made this pressure axial obtaining by summing up the parallel pressure a result that followed the axle of the thruster causing the propulsion force…

In December 1910, on the field at Issy-les-Moulineaux, Henri Coandă met his destiny. He started the Clerget engine of the aircraft, the turbine started turning faster and faster; a noise specific to the jet engines broke the silence on the field. The aircraft started running, it picked up speed, the airflow rejected by the compressor turned into flames; the flames got dangerously closer to young Coandă´s face, the noise grew in intensity once with the speed; the inventor, who was not a pilot, got scared, he lost his self-control as the aircraft run faster and faster, it lifted from the ground, made a chandelle on a wing and crashed, not before lucky Coandă had been ejected out of the plane. It has been the first experiment in the history of aeronautics with a jet propelled aircraft.

Henri Coandă´s talent, skill and vocation determined an act of technical creation that others, at that time and later, could not even imagine, so much the less understand. Having seized the reality, Gustave Eiffel, one of those who believed in the “miracle” named Coandă, publicly declared: “This boy was born 30, if not 50 years earlier!”

Today, objectively looking at the photos of this plane, one can not say more but theword: “Fascinating!”

As a homage paid to the great scientist, Romania´s biggest air gate, formerly known as Otopeni Airport, bears his name – Bucharest “Henri Coandă” International Airport.  On the occasion of the anniversary of a century since the exhibition of the first jet aircraft at the second Aeronautics Salon in Paris, Romfilatelia introduces into circulation the postage stamps issue “Centenary of the jet aircraft – Coandă 1910”.

Romfilatelia kindly thanks the Bucharest Aviation Museum and Mr. Cristian Crăciunoiu and Mr. George Paul Sandachi, for their support in the accomplishing of this postage stamps issue. 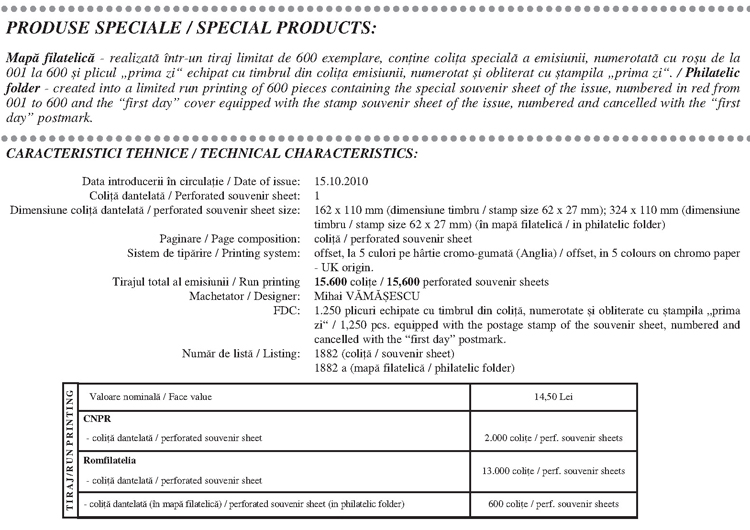