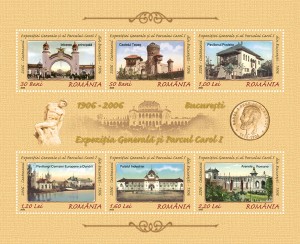 Romfilatelia, the specialized company in issuing and trading Romanian postage stamps, introduces into circulation a philatelic issue dedicated to the Centenary of the General Exhibition of 1906 and of the Charles I Park.
The General Exhibition was organized in the Charles I Park (formerly called the Filaret Hill) in 1906, with a view to presenting Romania´s achievements in the field of internal politics, of external politics, as well as of culture, through achievement in the field of literature, music, painting, theatre, architecture, etc.
King Charles I inaugurated the Exhibition on the 6th of June 1906. In  1906, Romania celebrated 1800 years since the establishment of the first Roman colonists on our lands (106 A.D.) and since the conquest of Dacia by Trajan, 40 years of reign of King Charles I and 25 years since the Romanian Princedoms had became a Kingdom.
The project, coordinated by the architect I. D. Berindei, was inspired by the Universal Exhibition of Paris – 1900 and contained pavilions dedicated to industry, trade, agriculture, forestry, mines, as well as to culture and arts. The architects of the exhibition were Victor Stefãnescu and ªtefan Burcuº, joined by renowned engineers. Not all works of construction and setting of the material were finished by the official inauguration.
The opening gala, adjourned because of the rainy weather, took place on the 6th of June. At the inauguration took part the entire government, the royal family, members of the administration, foreign guests, members of the diplomatic corps accredited in Bucharest, except for the legation of the Ottoman Empire. The battery from Calafat, called “Charles I”, had the honor of shooting the gunfire that marked the official opening of the exhibition. The royal family was welcomed when entering the park, through the circular arc gate, by the organizers, the government and a group of 300 notaries, mayors and headmost villagers from all the counties of the country. At the Roman Arenas, I. Lahovari, C. I. Istrati and King Charles I held their speeches.
Besides the pavilions dedicated to Romania, there were also pavilions of France, Hungary, and Austria. On the Trocadero hill there was the Arts Palace. Accomplished by the engineer Grant and designed by Victor Stefãnescu, on a surface of more than 2000 square meters, it was a grandiose construction, erected in a very short time. Later, it became the building of the Military Museum. Under the terrace “A. I. Cuza” located in front of the Arts Palace, there was a cave and a water basin. Also called the “Giants Cave” or the “Charmed Cave”, at the entrance of this cave there was a monumental assembly, composed of three statues. It is worth mentioning that the assembly was the creation of three architects: Filip Marin sculpted the “Beauty” or the “Beauty asleep”, out of marble, and Dumitru Paciurea and Frederic Stork created the two giants of stone. The giants were placed one in front of each other, and between them the “Beauty asleep” was lying down.
The Waters Castle, where the water reservoir of the park is, built entirely of stone, also called the Tepes´ Tower, was inspired by the citadel of Vlad the Impaler of Argeº Gorge. The tower, 32 m high, was also used for light shows.
The Roman Arenas, a work of the engineer Elie Radu, with a maximum capacity of 5000 places, was the venue of the exhibition opening and closing galas and of other cultural and artistic events that gave the occasion to claiming the unity of blood and language of all Romanians.
At the Jubilee high foreign officials participated as well. The mayor of Vienna was warmly welcomed, as well as the delegation of the city of Rome. As a sign of the Latinity of Romanians, the Bucharest received as a gift from Rome a copy of the She-Wolf whose original is on the Capitol.
The jubilee year and the first National Exhibition witnessed an important philatelic issue, plagues, and medals. Many postcards were printed, presenting the pavilions of the exhibition. The closing gala took place on the 23rd of November 1906, but in the absence of King Charles I who couldn’t make it, because of health problems. Queen Elisabeth and the princely couple Prince Ferdinand and Princess Maria were present. The discourse uttered by Ion Lahovari on that day thoroughly showed the objectives aimed at by the organizers: “we intended to show foreigners and Romanians what Romania was aforetime and what it is today, after 40 years of the glorious reign of King Charles I… we wanted for the foreigners to know us just like the Romanians, and even to know each other better, to be aware that between the Danube and the Carpathians there is an industrious, brave and wise people that lives, grows and becomes stronger, that is governed by a patriot and wise King”.
The philatelic issue includes 6 postage stamps and a miniature sheet; all of them show images of some pavilions within the General Exhibition of 1906.
The postage stamp with the face value of 30 Bani exhibits the Main entrance of Charles I Park.
The postage stamp with the face value of  50 Bani presents the Tepes Castle.
The postage stamp with the face value of  RON 1.00 exhibits the Post Office Pavilion.
The postage stamp with the face value of RON 1.20 shows the Danube European Commission Pavilion.
The postage stamp with the face value of RON 1.60 exhibits the Industry Palace.
The postage stamp with the face value of RON 2.20 presents the Roman Arenas.
The miniature sheet of the issue, with the face value of RON 2.20 exhibits the Arts Palace.
To accomplish the philatelic issue, documentary materials and photo images provided by the Library of the Romanian Academy were used. 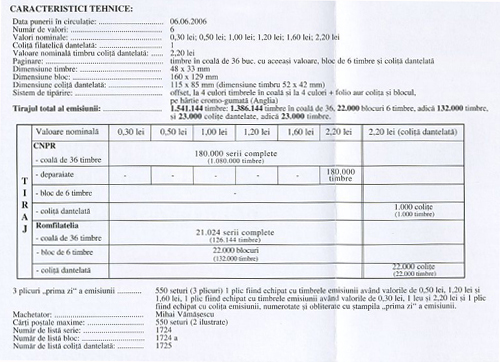