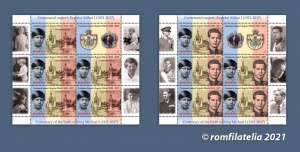 Paying its deep respect for the last King of Romania, Romfilatelia introduces into circulation on Monday, October 25th, this year, the postage stamps issue Centenary of the birth of King Michael I.

The issue consists of two postage stamps, an imperforated souvenir sheet, a philatelic block of two stamps and two labels, a First Day Cover and two maxicards, for the maximaphily enthusiasts.

The stamps, both with the face value of Lei 9, illustrate the portraits of King Michael I from childhood and youth, and in the background is the image of Peles Castle in Sinaia.

The imperforated souvenir sheet presents in the centre the postage stamp with the face value of Lei 31.50, that depicts the portrait of King Michael I bearing a pilot uniform, the stamp being framed by the coat of arms of the Romania’s Kingdom and the royal crown.

In 1925, King Michael I’s childhood registered an unexpected situation: his father, Prince Carol, had left Romania, and the Crown Council had approved his resignation from the Throne of Romania. Through what we call the “January 4th Deed”, Prince Michael was recognized as Crown Prince.

In 1927, after the death of King Ferdinand I, Michael would be enthroned as King with a Regency consisting of Prince Nicolae, Patriarch Miron Cristea and Gheorghe Buzdugan, President of the High Court of Cassation, later replaced by Constantin Sarateanu, Counsellor of the Court of Cassation. The oath was taken before the Parliament by the new King and the Regency on July 20th, 1927.

The main political parties positioned themselves differently in relation to the Regency. The National Liberal Party supported it, speeding up the military oath by the King to prevent the formation of a pro-Carol II current in the army. However, the National Peasants’ Party showed an attitude meant to bring Prince Carol to the country.

King Michael, being of minor age, favoured a visible authority of the Regency, which proved to be lacking the ability meant to arbitrate the political life of the country. In these conditions, the unannounced and illegal return of Carol to Romania, on June 8th, 1930, accepted by the representatives of the political parties, was, in fact, an act of deposing Michael I.

In September 1939, World War II began. On September 6th, 1940, Carol II was forced to abdicate and leave the country, the throne returning for the second time to Michael.

Not to mention the tragedies caused by the state of war, the heavy fighting on the territory of the Soviet Union, the destruction caused by Allied bombing, we must insist on the primary role that King Michael I played to shorten the war and avoid invaluable damage which Romania would have suffered. Joining pro-Allies politicians and the initiative to leave the alliance with Nazi Germany, King Michael I staged the coup d’état on August 23rd, 1944: the arrest of Antonescu and the restoration of the 1923 Constitution.

The presence of Soviet troops on the territory of Romania and the lack of concrete actions of the Allies allowed the communists to impose a regime of terror, present in the lives of Romanians until December 1989.

King Michael I’s attempts to limit the abuses of the government imposed by the Soviet Union, the royal strike (refusal to sign certain deeds that violated the laws of democracy), the appeals made to the great Western powers did not have the expected results.

On December 30th, 1947, the deed of imposed abdication by the King, drafted by the representatives of the communist government, was signed, the King leaving the country on January 3rd, 1948.

The appreciations of some fervent adorers of His Majesty’s biography, King Michael I, highlight that he was a good king, like his grandfather Ferdinand I, a modest personality with a sense of duty to the country. However, he went through turbulent times, in which the forces of evil imposed constraints foreign to his constitutional spirit and also foreign to the mentality of the political class that had made Greater Romania in 1918.

It is known that after the abdication, in June 1948, Michael I married Anne, Princess of Bourbon-Parma, with whom he had five daughters. In the same year, the communist authorities withdrew his Romanian citizenship, which the King regained, after the last convulsions of communist conceptions, in 1997.

During the imposed exile, the Romanian royal family earned a living through the income obtained from their own activities carried out in Switzerland and Great Britain.

After returning to the country, King Michael I made a tour of Western Europe in the very first year of establishment in Romania, lobbying for Romania’s admission to NATO and the European Union.

Throughout his life, the King sacredly preserved the symbol of nation and country: the Royal Crown. Remained in the custody of Princess Margaret, as a symbol of the Royalty and Monarchy, it is a precious asset of the nation, the Romanian people and the history of a nation that entered the nations of the world with the coronation of the King Carol I, whose steel crown was also worn on the occasion of the coronation by King Michael I, the last king of Romania and the last great Statesman, an example of devotion, loyalty, courage, modesty and dignity, attributes defined by the words spoken at the Romanian Parliament meeting on October 25th, a decade ago.

“I have served the Romanian nation throughout a long and eventful life, some happy and many unhappy. After 84 years since I became King, I can say without hesitation to the Romanian nation: The most important things to acquire, after freedom and democracy, are identity and dignity.”

Romfilatelia thanks the House of Her Majesty the Crown Custodian for the documentary and photographic support provided to the development of this postage stamps issue. 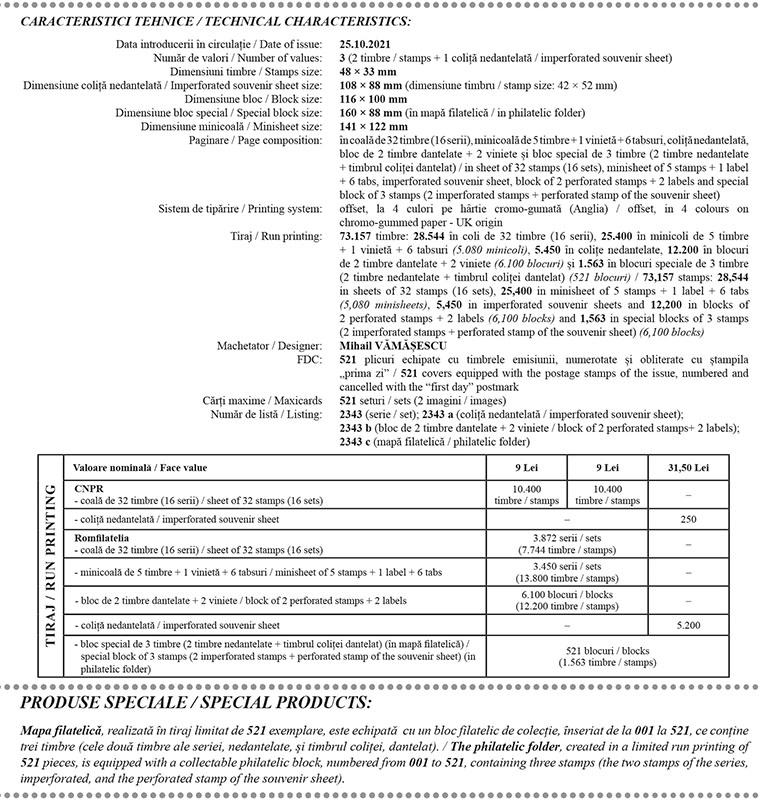