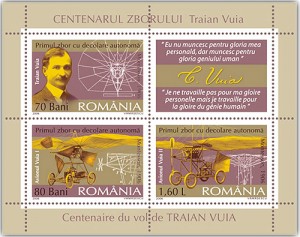 On the occasion of the centenary since the historic flight in the airplane “Vuia I” in the field of Montesson (France) pioneer of the global aviation, Traian Vuia, Romfilatelia
The company specializes in publishing and marketing of Romanian stamps, introduced in the postal system the postage stamp issue Centenary of Flight Traian Vuia.
Born in 1872 in the town Surducul Mic (locality which today bears his name) in the department of Timi º ;, & Traian Vuia was educated at the High School State for Lugoj, o & ugrave; he passed the baccalaureate exam in 1892. Then he followed & agrave; Budapest, Faculty of Law, of O & ugrave; he obtained the title of Doctor of Legal Sciences. M & ecirc; me time, he attended evening classes & agrave; Polytechnique.
During the summer of 1902, he left & agrave; Paris. His intention was to document the heaviest flying machines and the air, to return to his country build its own aircraft.
The atmosphere & egrave; re aeronautical circles from here, the technical possibilities & agrave; Paris determined the d’essayer complete the project on French soil.
16th February 1903 he presented & agrave; the Academy of Sciences a memoir about his invention & quot; & quot d’aéroplane automobile project; for which he obtained the patent no. 332 106 17th August & ucirc; t in 1903.
Its original design is the mixture into a coherent set of two previous major technical achievements: the automobile and the airfoil.
With the financial aid & egrave; re of his countrymen, he began the construction plane, being obliged to solve the problem alone & egrave; me motor.
In December 1905, the flight & quot apparatus; Vuia I & quot; Montesson was brought on the field for the rst & egrave; res experiences. His enti & egrave; re technical composition proves the ingenuity of its builder.
The 18th March 1906. Here on the field of near Paris, Vuia gave itself appointment with destiny. The plane rolled to the floor & agrave; the help of the tractive propeller, broke away from the earth, flew a distance of 12 m & egrave; very, then the engine ecirc & arr; and your plane lands on the ground. This was the first flight of a monoplane on his own.
During the summer of the year 1906, Vuia confirmed by several experiments that the flight of the 18th March was not a fluke. He built a second & egrave; me flying aircraft, continuing its public demonstrations.
& Quot; The Aérophile & quot; – Publication of the French Aero Club and other specialized publications rel & egrave; wind & agrave; this time the & agrave; the importance of technical creation Traian Vuia.
The mod & egrave; the Vuia, launching on wheels, is also adopted by other manufacturers, including by Fr & egrave; res Wright.
& Quot; D’ailleurs, specialty Vuia American historiography regarded as the undisputed pioneer of the global aviation, and aircraft & agrave; Ost & quot train; Vuia I & quot; was seen as a & quot; & quot prophetic fulfillment; & Quot; (& quot; The Fr & egrave; res Wright – Conquerors of the sky & quot; author: Dr. Valeriu Avram).
The aircraft goes in & egrave; re industrial. A new revolution in the field of locomotion is happening.
In 1918, Vuia became president of the National Committee of the Romanians in Transylvania and Bucovina, an organization campaigning for the realization of the desideratum of the union of Transylvania and Bukovina in the Kingdom of Romania.
During the period after & egrave; s & egrave the rst; re World War it concerns the field of vertical flight, also building two helicopt & egrave; res experimental. M & ecirc; me time he patented several inventions for increased engine performance.
During the second & egrave; me world war, he held the position of President of the Romanian National Front Antifascist of France.
In 1946 he was elected honorary member of the Romanian Academy.
He returned to Romania in 1950, o ;, & ugrave apr & egrave; s only a few weeks, he died.
In 1976, the town of Montesson mounted his frontispiece a memorial plaque dedicated to the first flight of the world with the plane & quot; Vuia I & quot ;. The grounds of the local town hall is a bust of the Romanian inventor, and in March 2000, another plaque was discovered in another square of the town, which bears the name of Traian Vuia. 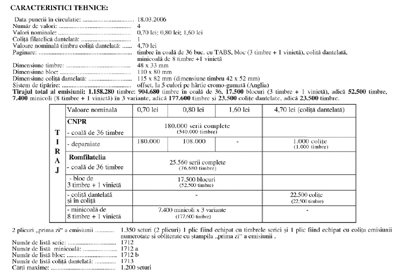