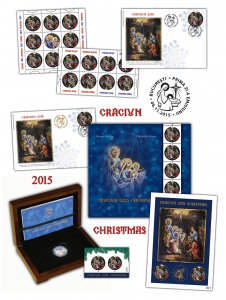 “Joy is the true gift of Christmas.” (Pope Benedict XVI)

Out of joy for all believers and the Romanian people’s culture, but also as an extension of a cherished tradition, Romfilatelia marks the Holy Feast of Jesus Christ’s Nativity through a special postage stamp issue, suggestively entitled Christmas 2015, which will be available for purchase starting from Friday, November 6th, 2015, in Romfilatelia’s shops from Bucharest, Bacau, Brasov, Cluj-Napoca, Iasi and Timisoara.

The Feast of Nativity, popularly called Christmas, is one of the major Christian feasts and is celebrated with great solemnity every year on December 25th. Marking an important event in the history of Christianity, the birth of Jesus Christ from the Virgin Mary, Christmas symbolizes the joy of man’s encounter with God, feast which is celebrated around the world by different religious traditions, as well as secular ones.

The postage stamp dedicated to Christmas, having the face value of leu 1.00, illustrates this year the image of a beautiful icon belonging to the painter Gheorghe Tattarescu, icon which presents the moment of the Birth of Jesus and is part of the heritage of the Gavrila Simion Institute of
Eco-Museum Research Centre
in Tulcea.

Dating from the 19th century, the icon of the Nativity of Jesus, created by Gheorghe Tattarescu, distinguishes itself by the sense of measure, the clarity of its compositions, through the skill and the design finesse, as well as the sober colors and the dignified expression of the characters. Created in the oil painting technique, the icon is surrounded by a golden and narrow frame, and on the right, Joseph and the Virgin Mary, who kneels and holds the child Christ in her arms are presented. Through the clouds the guiding star shines into the manger, the long awaited sign by the Magi who welcomed the world’s Emperor with gold, myrrh and frankincense. The dark background, similar to the chiaroscuro technique, lets shine the red, yellow, blue and white colors from the characters’ faces and clothes.

The philatelic elements of the issue Christmas 2015 include, next to the thematic stamp, a first day cover and a postal stationery, but also two special products, all created in a unique graphic and artistic manner, which transposes the important meaning of the Christian feast on paper.

The two special products complete the elements of the stamp issue dedicated to Christmas, the collectors and the general public being able to admire such collection products, in limited series.

The philatelic album is created into a limited edition of 425 pcs. and is equipped with the block of two perforated stamps of the issue with gold foiling elements on the border, and the First Day Cover having the “first day” postmark also clearly imprinted in gold foiling. Both products are numbered from 001 to 425.

Romfilatelia thanks the Gavrila Simion Institute of Eco-Museum Research Centre in Tulcea for the documentary support granted in the achievement of this postage stamp issue.

Awaiting the Feast of Nativity, we invite you to admire Romfilatelia’s project dedicated to Christmas and leave you inspired by its expressiveness and suggestive force in preparing your gifts for your loved ones.