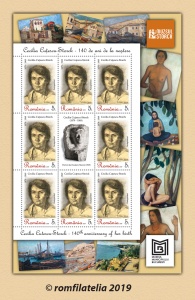 The postage stamp issue Cecilia Cutescu-Storck 140th anniversary of her birth, which Romfilatelia will introduce into circulation on Thursday, March 14th, is dedicated to the celebration of the life and personality of the first professor of decorative arts in Romania, also noted as the first female teacher at a State Art University in Europe.

She saw daylight on March 14th, 1879, in Caineni Township, Valcea County. The artist was adopted by her grandparents Constantin and Elena Cutescu, living with them in Predeal.

After graduating from the primary school in Bucharest, she enrolled in the Academy of Fine Arts.

At only 18 years of age, she left to Munich and studied the painting under the direction of Fredrich Fehr and Ludwig Schmidt, from where her journey led to Paris, to become a student of the Académie Julian.

In the capital of France, she also attended the courses of the École des Beaux Arts (School of Fine Arts).

Her first pictorial manifestations were influenced by German expressionism, coming to the fore by temperamental works, full of force.

She established for a period of time in Paris. In 1902, her works were exhibited at Champs de Mars, and later in 1903 she became the wife of the musician Romulus Kunzer.

After organizing her first personal exhibition in Paris (1905), she organized a similar exhibition at the Romanian Athenaeum. She was a member of Tinerimea Artistică (Artistic Youth) Society.

In 1909 she remarried the sculptor Frederic Storck.

Appreciated for her professionalism, she became a tenured professor at the Department of Decorative Arts within the School of Fine Arts in Bucharest, becoming the first female professor of monumental arts in Europe.

After the mural painting at the Bank Marmorosch Blanc (1916), she conceived and carried out another monumental mural painting for the Bucharest University of Economic Studies (1933), which had as theme Istoria Negotului Romanesc (History of the Romanian Trade).

As of 1922, her works have been exhibited in many exhibitions organized in Venice, Athens, Barcelona, Amsterdam, Milan, Rome, Warsaw, Paris, Prague, Oslo, Bern, Budapest etc.

Together with two other extraordinary female figures, Olga Greceanu and Nina Arbore, Cecilia Cutescu-Storck established the Association of Romanian Women Painters and Sculptors, forming the so-called Group of the Three Ladies, great masters of the national art. In 1937, Cecilia Cutescu-Storck has been elected president of the Romanian Trade Unions.

Her activity was rewarded in the country in 1957, being granted the title of Emeritus Master of Art.

In Balchik, where the Storck spouses often travelled and built an elegant dwelling, the artist felt inspired by the exotic landscape and the scenic places. In fact, Cecilia Cutescu-Storck testified in her book Fresca of a Life that: “I owe to this terribly beautiful landscape of Balchik, the inspiration of four painting exhibitions”.

Rigorous in the painting execution, Cecilia Cutescu-Storck distinguished as an original artist, in her work trying to combine the tradition of easel painting with a vision of monumental and decorative pictorial rendering.

The dense and dark line of the drawing coal gave strength to the lines of the face, and the direct and clear look perfectly suggests the character strength of this woman, an exceptional painter, who excelled in the land of monumental art, reserved until then only to male artists.

The perforated souvenir sheet, with the face value of Lei 28.50, presents in the stamp, her portrait, along with a series of works made by her.
The portrait of Cecilia Cutescu-Storck executed by her husband, the sculptor Frederic Storck, represents the artist in her youth. It is a work that reflects the beauty and sensuality of the woman-muse, but also her determination and strength, her face being carved in a massive marble block, the portrait having a rough, very poorly-processed background.

The unique sculpture demonstrates the close connection between the two outstanding artists, united first of all by the common love for harmony and beauty.

On the first day envelope of the issue, it is illustrated a detail of the exhibition space in the Frederick Storck and Cecilia Cutescu-Storck Museum.

Romfilatelia thanks the Bucharest Municipality Museum for the documentary and photographic support given to the development of this postage stamp issue. 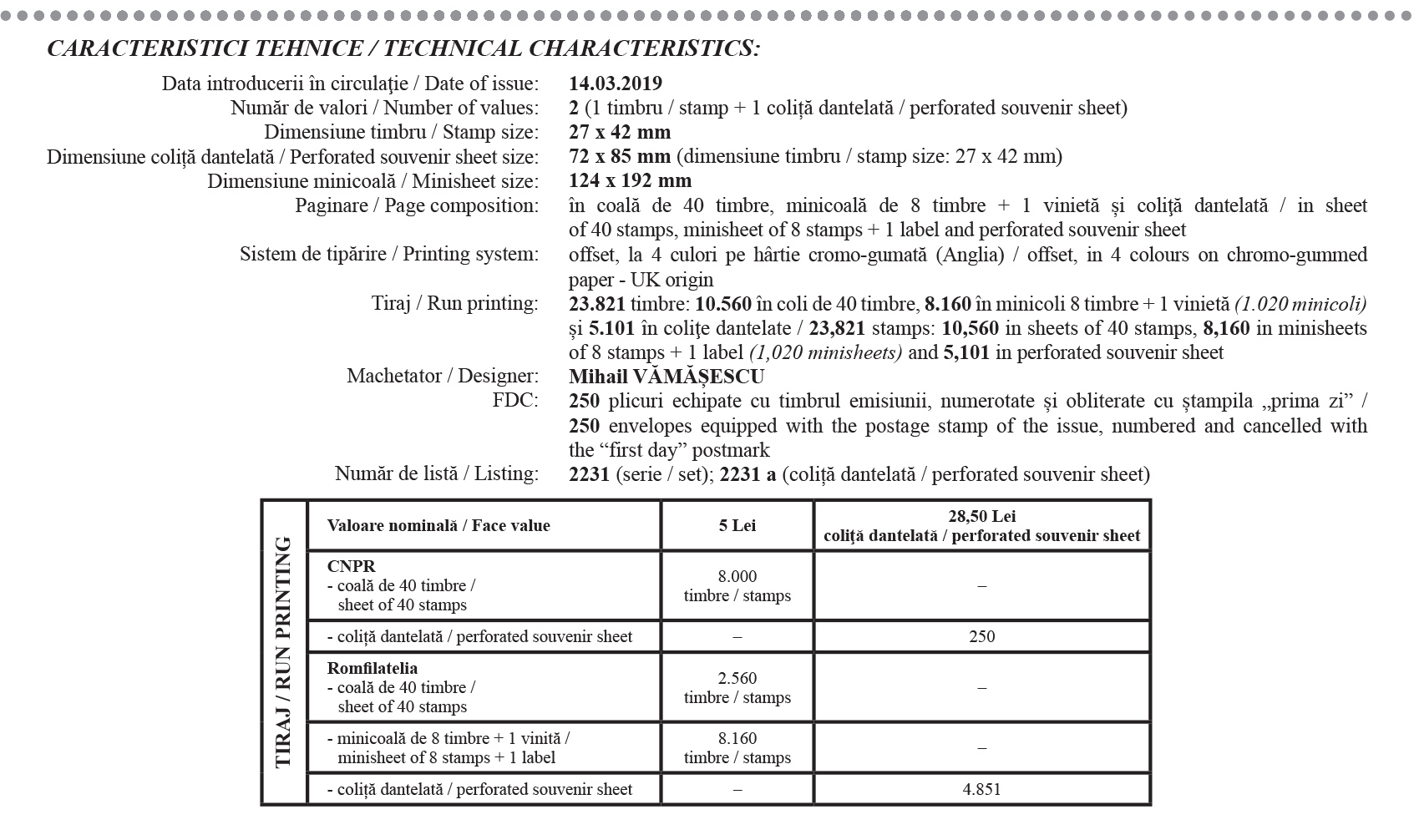