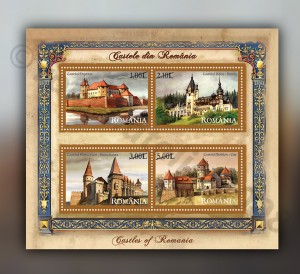 Occasioned by the organizing of the World Philatelic Exhibition – EFIRO 2008 – in Bucharest, Romfilatelia introduces into circulation the postage stamps issue „Castles of Romania“. Occasioned by the organizing of the World Philatelic Exhibition – EFIRO 2008 – in Bucharest, Romfilatelia introduces into circulation the postage stamps issue „Castles of Romania“.
The philatelic issue illustrates several well known castles popular not only in Romania but equally outside its borders.
Fagaras Castle is illustrated on the stamp with the face value of RON 1.00.
The building of the stronghold, a symbol for the County of Fagaras, began back in 1300. Initially built in wood and clay, starting with the 14th century, it was reinforced with stonewalls. Finalized during the reign of ªtefan Mailat
(1528-1541), the building was, at the time, described as: „Located on plain land and although a small citadel, Fagaras proves to be an important fortress; its strengths is conferred by the bulwark as well as the surrounding  large ditch that only allows passage by means of a very long bridge enabling access to fortified towers watchfully guarded by soldiers.“ (Georgio Tomasi, end of the 16th century).
As residence for princes, the castle had military, political, administrative, economic, and judicial functions. With the takeover of Transylvania by the Austrian Empire, the fortress served as a barrack and a military prison.
In 1906, during a trip in Transylvania, Nicolae Iorga found it close to ruin. It is presently restored and it again bears the appearance of the old 16th century fortress.
Peles Castle is presented on the stamp with the face value of RON 2.10.
Rightfully considered „Pearl of the Carpathians“, the Peles Castle in Sinaia is one of the most beautiful castles in Romania.
From its early days, it was intended to be a summer royal residence. In August 1875, at the castle construction inauguration ceremony, King Carol 1st asserted: „May this castle rise and building be completed to serve as the swing for my dynasty and the national dynasty“. The foundation act together with the building document and several coins with King Carol 1st’s effigy were buried in the foundation of the fortress.
The castle is located on the banks of the Peles creek. It was built in wood, stone, brick, and marble during two time frames: between 1873-1883 (1st floor) and 1896-1914 (2nd floor). The castle was built according to the design plans bearing the signature of the Viennese architect Wilhelm von Doderer and of the German one, Johann Schultz. Interior as well as exterior design was conceived by J.D. Heymann in Hamburg, August Bembé in Mainz, and Berhard Ludwig in Viena. Between 1896-1914 several modifications and Gothic additions were performed as requested by the Czech architect Karel Liman and André Lecomte de Noüy of French origin.
The more than 150 rooms of the Peles Castle are designed according to various styles harmoniously combining the German and Italian Renaissance, Gothic, German, Austrian, Turkish Baroque, and the French Rococo. Counting more than 4,000 items, the prey and hunting weapon collection is among the largest of its type in Europe.
The Huniad Castle is illustrated on the stamp with the face value of RON 3.00.
Also called the Corvinesti castle, it is one of the most important monuments of feudal Gothic art in Europe.
The castle, whose construction began during the 14th century on an ancient Roman camp, was gifted by King Sigismund I of Luxemburg to Prince Voicu, father of Iancu of Hunedoara.
After Voicu’s death, Iancu of Hunedoara started work on the modernization and improvement of the fortification. Between 1440-1453 the Diet Hall, the Knights’ Hall, the Maces Towers, the White Bastion, and the Capistrano Tower (named after the illustrious monk) were built.
Between 1618-1623, Gabor Bethlen Prince of Transylvania, adds another 2 floors on the Southern wing of the castle and another one on the Northern wing.
Along time, several fires caused the destruction of different parts of the castle being restored several times; two times solely during the 20th century.
Bethlen-Cris Castle is illustrated on the stamp with the face value of RON 5.00.
The castle is rightfully considered as the most beautiful fortification built in the Renaissance style in the entire region of Transylvania.
It was located on the ancient borders of the Austro – Hungarian Empire, surrounded by a community of Saxon origin that defended the area against foreign invasions. A document dating from the beginning of the 14th century made reference to the fact that the manor and the castle had been owned by some family descending from the Bethlens’ (Cris branch).
The quadrilateral castle had bastions in its corners and the interior yard had a round donjon on five levels. Starting with the 15th century, the fortress evolved towards an aristocrat type of castle. Two centuries later, Franciscus Bethlen built the family chapel whereas later on, Alexius Bethlen would add an extra level to the donjon tower. During the same epoch, the mansion was built and it comprised the brick vault cellar, the ground floor, the first floor, the sauna, and an open gallery with adorned pillars and arches.