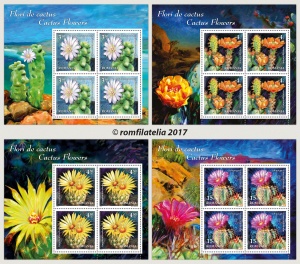 Cacti are part of the Cactaceae family, which contains over 4000 species. The word “káktos” comes from the Greek language and means a spiky plant.

Romfilatelia introduces into circulation the CACTUS FLOWERS  postage stamp issue, on Friday, september 15 th, in its own shops network in Bucharest, Bacau, Brasov, Cluj-Napoca, Iasi and Timisoara and online on https://romfilatelia.ro/store/

Their origin is found in the deserts of America, especially Nevada, Arizona, California, Mexico, where the specific vegetation is made of cacti. They have spread over time in all the deserts of the Earth regardless of the form of landscape.  Cacti are plants with a continuous presence due to their capacity for adaptation.  Even if they are plants used to drought, cacti impress with the gorgeous, large, colourful flowers that charm us with their simplicity.

Lophocereus schottii forma Monstruosus, illustrated on the stamp with face value of Lei 3.50, is a naturally occurring genetically stable mutation that, although sterile, continues to survive in the wilderness in the form of small populations, in a restricted area, in the North-Eastern El Arco between Mexico and the Baja Peninsula, on sands or fine gravel.

In these locations, the plants continue to survive by vegetative growth, by rooting fragments of branches that fall on the ground.

On the stamp with the face value of Lei 4 there is illustrated Opuntia aciculata, also known as the mother-in-law’s tongue, another member of the Cactaceae family. It is a species very popular in our country, in greenhouse or apartment culture. It originates from North-Western Mexico, the South-Western USA in areas with high aridity. The sun symbol of the ancient Native American populations, the species of Opuntia form colonies that stretch over large areas in the Mexican desert.

The flowers are large, about 10 cm in diameter, golden-yellow all the way to coral, with delicate and fragrant petals, and can appear almost all year, especially during April-September. The red purple, spiky, fruits, similar to small pears, are edible.

Coryphantha sulcata (Mammillaria sulcata) or pineapple cactus, is a small or medium-sized species of globular form. The spikes, usually 9-10, white-yellow in colour, are star-shaped, so that the plant appears covered with a white lace. The flowers of this cactus are bright yellow with an orange centre, with a sweet smell; they can reach 6-7.5 cm in diameter and appear to the top of the stem throughout the summer. Like most cacti, the Coryphantha species, illustrated on the stamp with face value Lei 4.50, changes its appearance throughout life.

Echinocactus horizonthalonius, popularly named, like other species of the genus, the mother-in-law’s stool, is a cactus with a globular, waxy, green-gray stem, with rounded, broad, slightly spiralled ribs.  It is illustrated on the stamp with the face value of Lei 15. The dark red, tall, slightly bent, 4 cm long, rounded spines are grouped 6-9, in the areoles. The plant can reach up to 40-50 cm in sizes, and will begin to bloom from the end of spring only when it reaches maturity, generally after the age of 10 years. Its dark pink flowers can exceed 3 cm in length.

This postage stamp issue is completed by a First day cover, 4 maxicards and as composition there were used a sheet of 28 stamps, the minisheet of 4 stamps.

The philatelic album is created into a limited edition of 255 pcs. and is equipped with the block of 4 postage stamps of the issue and the First Day Cover having the “first day” postmark clearly imprinted in gold foiling. Each element is numbered in black from 001 to 255.

Romfilatelia thanks the „Dimitrie Brandza” Bucharest University Botanical Garden, and photographer Ionut-Mihai Floca for the support granted in the creation of this postage stamp issue.