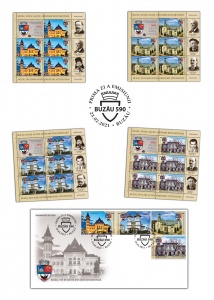 The city of Buzau is found in the historic documents of Wallachia as a place where important events took place, among which it is worth mentioning the following: its existence as a borough and customs checkpoint (status attested by a document issued at the court of Prince Dan II on January 30th, 1431), episcopal see, documented in 1525 under the reign of Radu of Afumati (the bishopric have been founded in 1500, during the reign of Radu IV the Great), the establishment, under the reign of Constantin Brancoveanu, of a printing house under the presses of which valuable books saw the light in Romanian language between 1691 and 1704. The geographical area where the city of Buzau is located is historically attested in the text of a document found in copy at the Vatican Library and the San Marco Library in Venice. The text describes the martyrdom of the Christian missionary Sava, drowned in the waters of the Mousaios River (Buzau River). The document was written in 374.

The anniversary postage stamps issue dedicated to Buzau reproduces in its images four representative architectural monuments closely related to the history, culture and social life of the city.

On the stamp with the face value of Lei 2.10 the Communal Palace is illustrated, located in the centre of Buzau, being the current headquarters of the City Hall and the Local Council. It was built between 1899 and 1903 at the request of the mayor of the city, Nicu Constantinescu, according to the project of the architect Alexandru Savulescu. The inauguration of the building, with the intended use of administrative palace, took place in 1903, in the presence of King Carol I and Prince Ferdinand. Combining Neo-Romanian elements with local architectural motifs (found in the boyar houses), to which are added decorative forms that refer to the grape vine (major presence on the lands of Buzau), the architect Savulescu made one of his benchmark creations in the field. After the damage caused by Allied bombing and fights between Soviet and German soldiers in August 1944, the Palace was rebuilt in 1947.

Marghiloman Mansion, whose image is reproduced on the stamp with the face value of Lei 7, is a representative architectural ensemble of the city of Buzau. Known as the Marghiloman Palace, it was built in the second half of the 19th century, by Iancu Marghiloman, former mayor of Buzau and a large landowner. After his death, his son Alexandru Marghiloman decided to modernize the ensemble, calling the services of the famous architect Paul Gottereau. Since 2011, the valuable architectural ensemble has been restored, becoming the “Alexandru Marghiloman” Cultural Centre, where various domestic and international cultural activities take place.

On the stamp with the face value of Lei 9 is depicted the Archdiocesan Cathedral.

The current building of the Archdiocesan Cathedral was built at the initiative of the Archbishop Epiphany between 2002 and 2009, according to the typicality of Romanian Christian churches, being divided into narthex, nave and altar. The painting made in the fresco technique is the work of the painter Petre Brasoveanu of Buzau. On November 8th, 2009, in the presence of His Beatitude Father Daniel, the consecration service of the place of worship, the most important in the Archdiocese of Buzau and Vrancea, was officiated.

“B. P. Hasdeu” National College, illustrated on the stamp with the face value of Lei 10.50, is the most important secondary education establishment in Buzau, founded in 1867, having as headquarters a building erected on a plot of land of Banului Monastery. Until 1875, it was called “Tudor Vladimirescu” Gymnasium. Starting with 1932, it is named after Bogdan Petriceicu Hasdeu.

It should be mentioned that in 1873, Basil Iorgulescu, the first director of the High School, set up in the premises of the institution the first library in the city, known as the “Carol I” Public Library. The same culture enthusiast, Basil Iorgulescu, asked the Ministry of Cults and Public Education for the approval to set up a collection of archaeological, historical and ethnographic pieces in Buzau, the fruit of personal concerns. After four years, a public collection of exhibits was displayed in one of the halls of “Bogdan Petriceicu Hasdeu” High School. The event is considered to be the birth of the first museum in Buzau.

Romfilatelia thanks the Buzau City Hall for the documentary support granted in the achievement of this postage stamps issue.

The postage stamps issue “Buzau, 590 Years of Documentary Attestation” will be available on Tuesday, February 23rd  2021, in Romfilatelia’s shops network in Bucharest, Bacau, Brasov, Cluj-Napoca, Iasi and Timisoara and online on https://romfilatelia.ro/store/. The postage stamps issue is completed by the “first day” covers,  in sheet of 32 stamps and minisheet of 5 stamps + 1 label + 3 tabs. 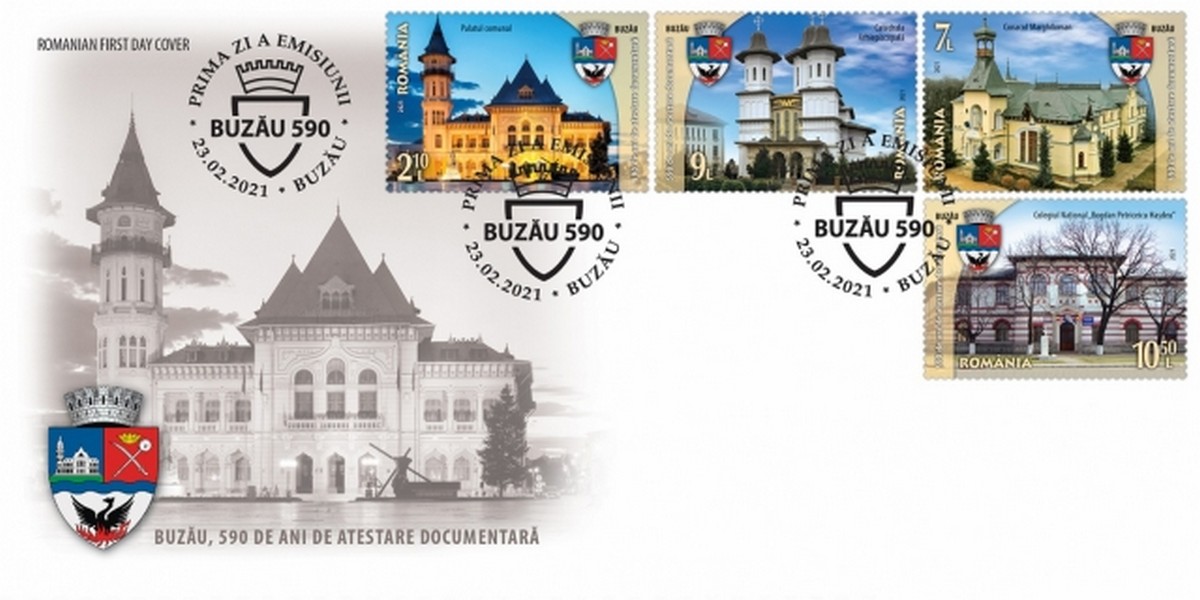 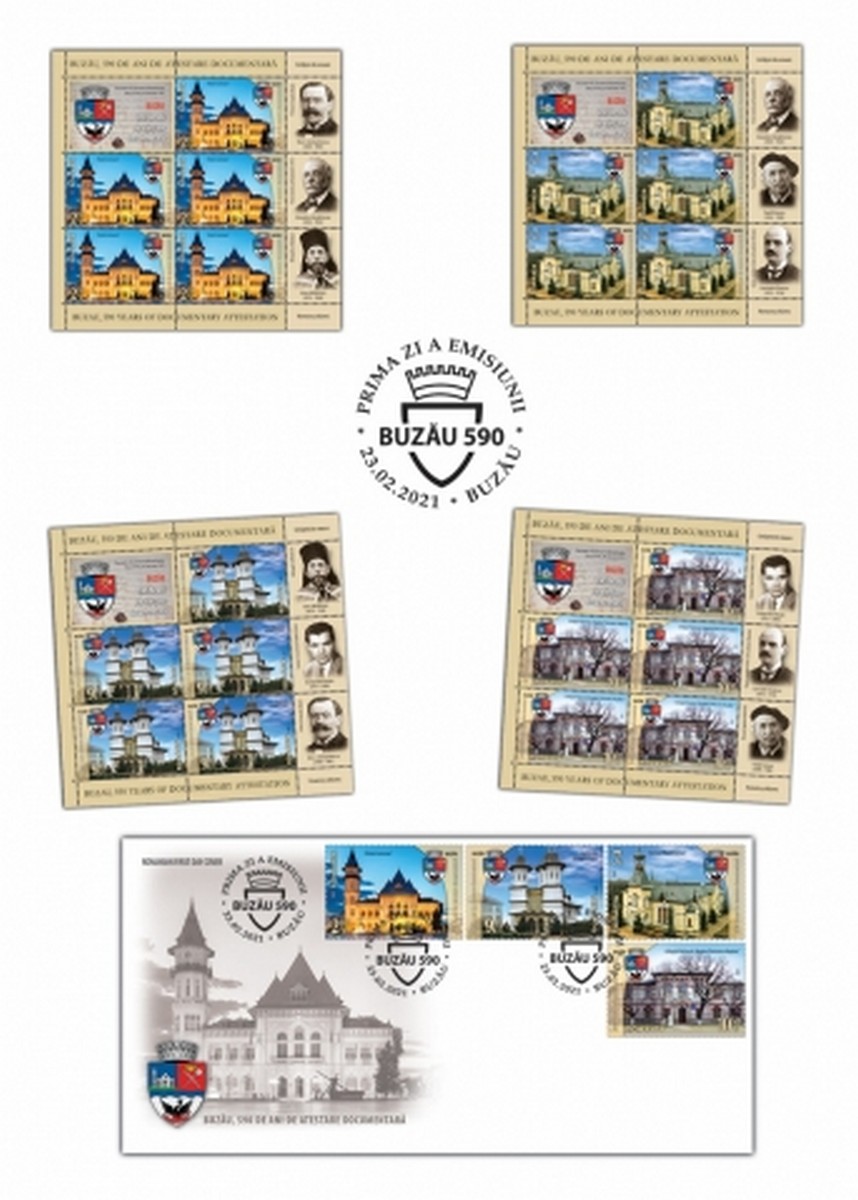 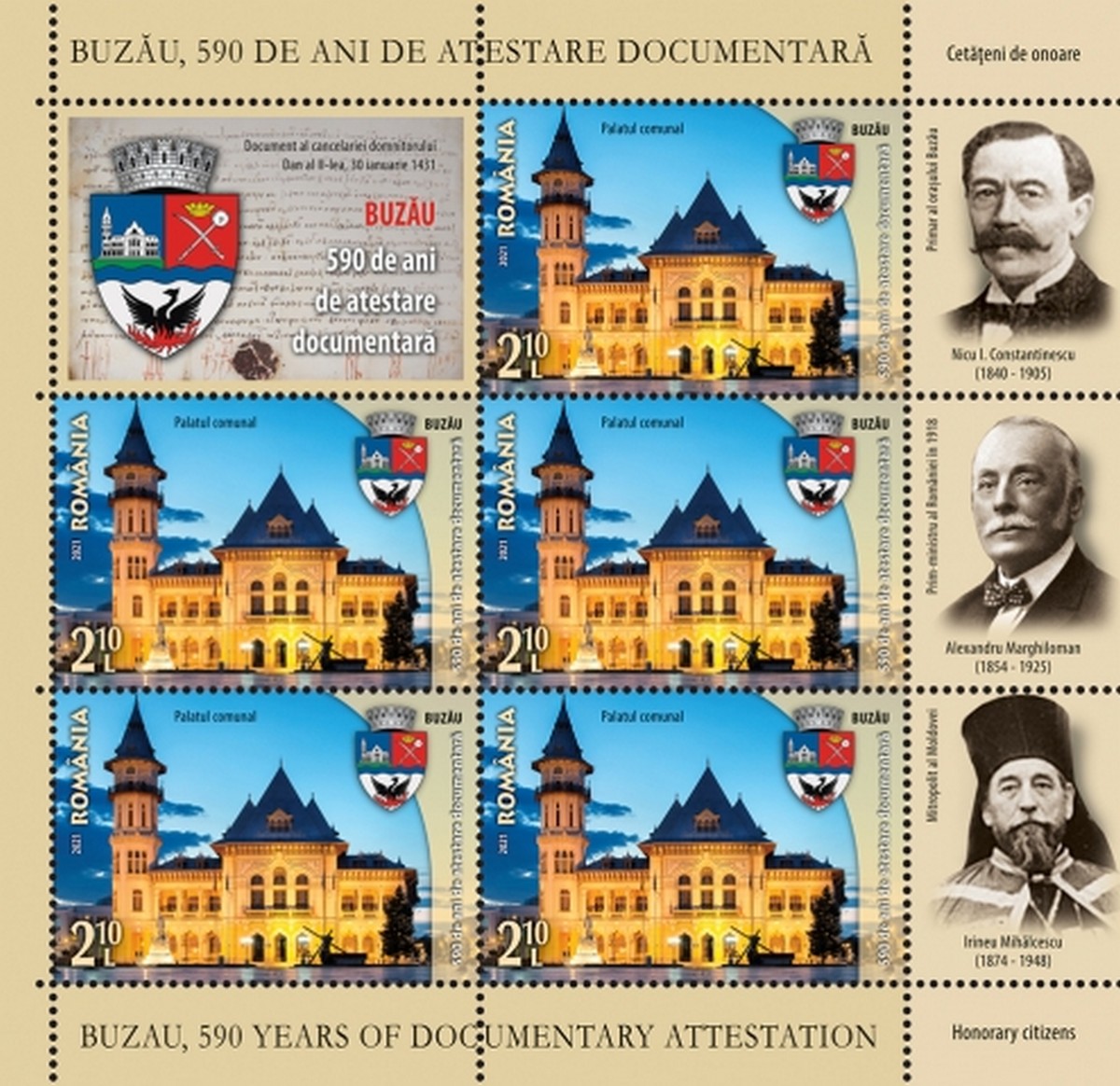 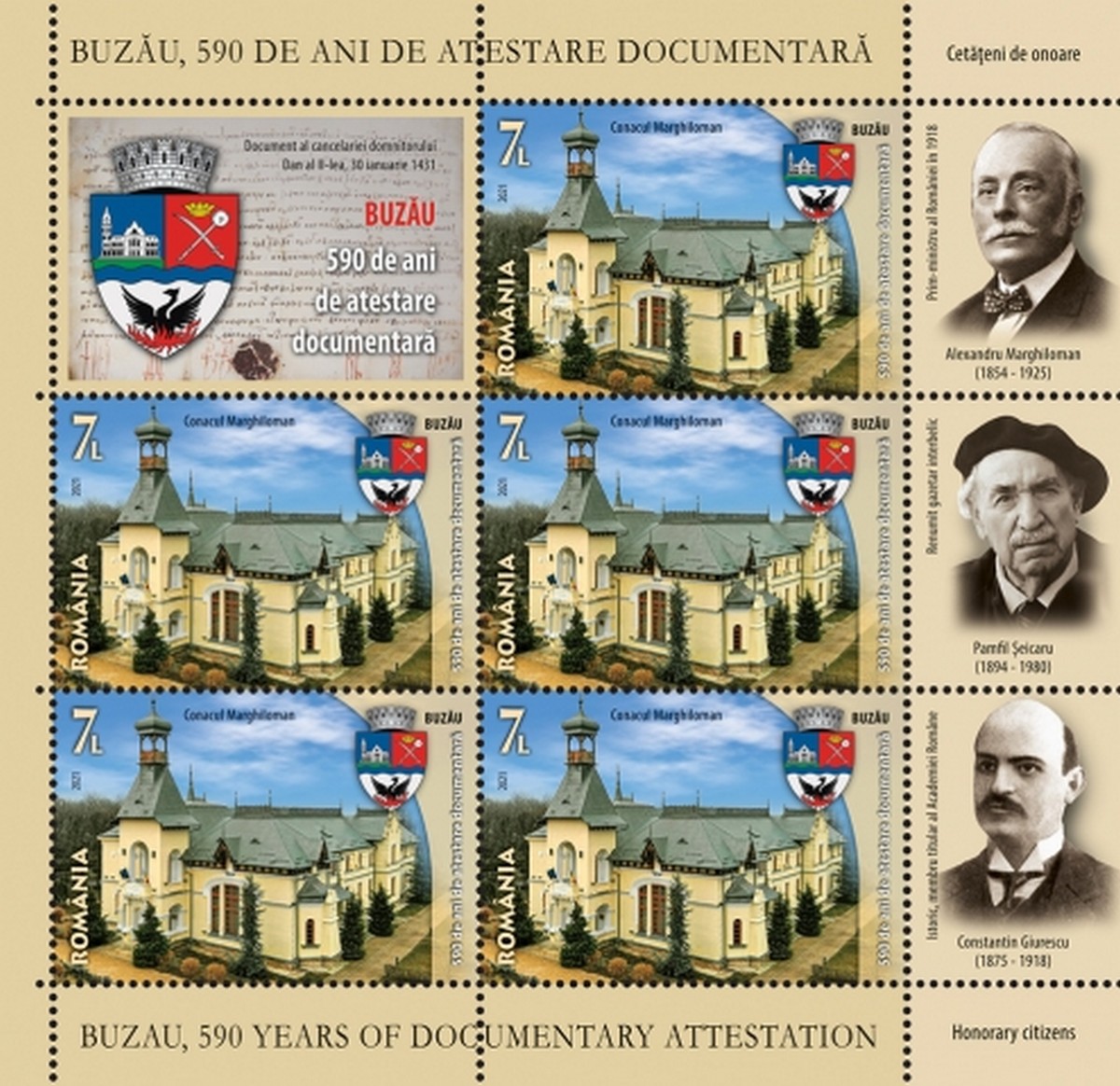 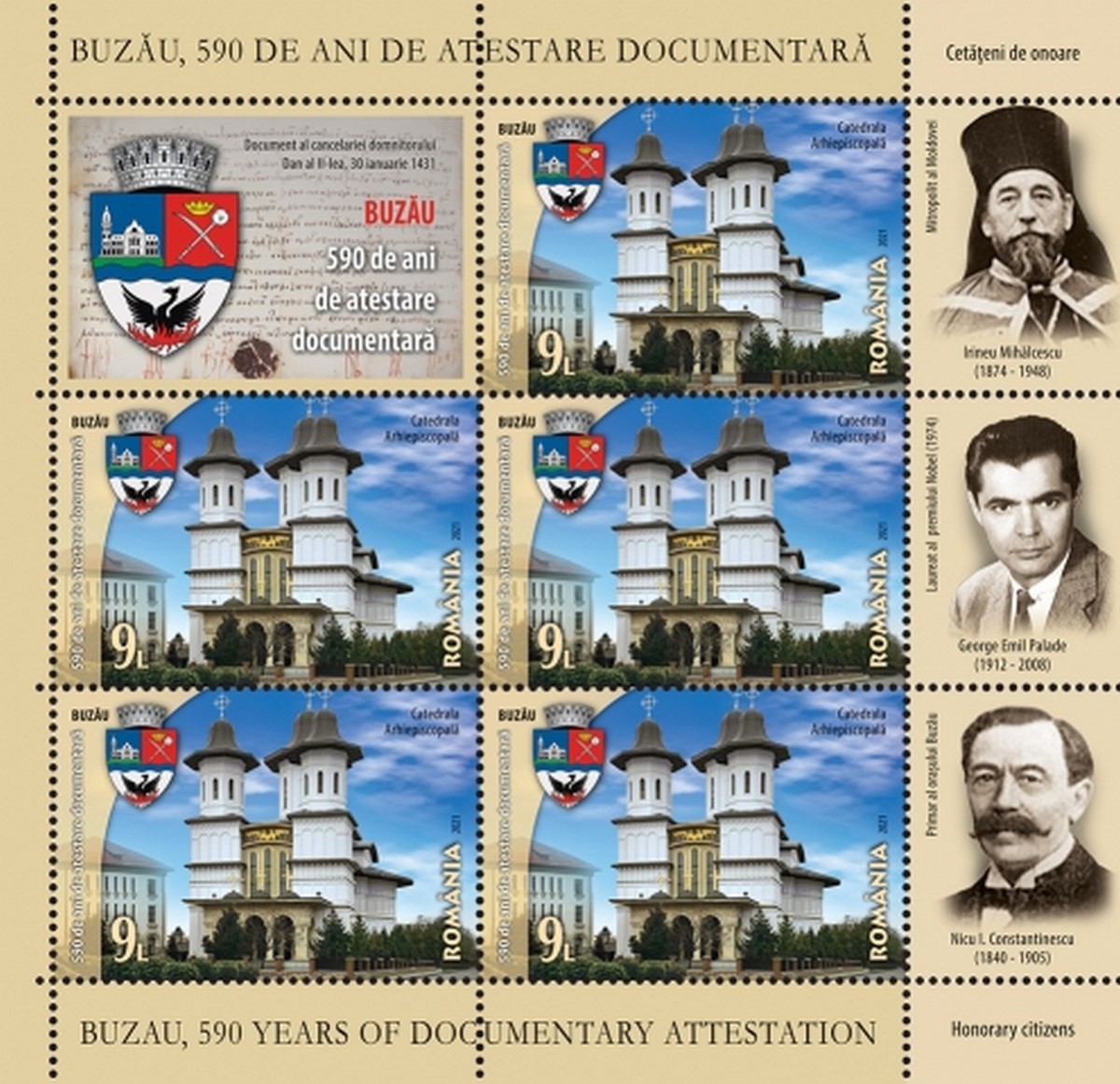 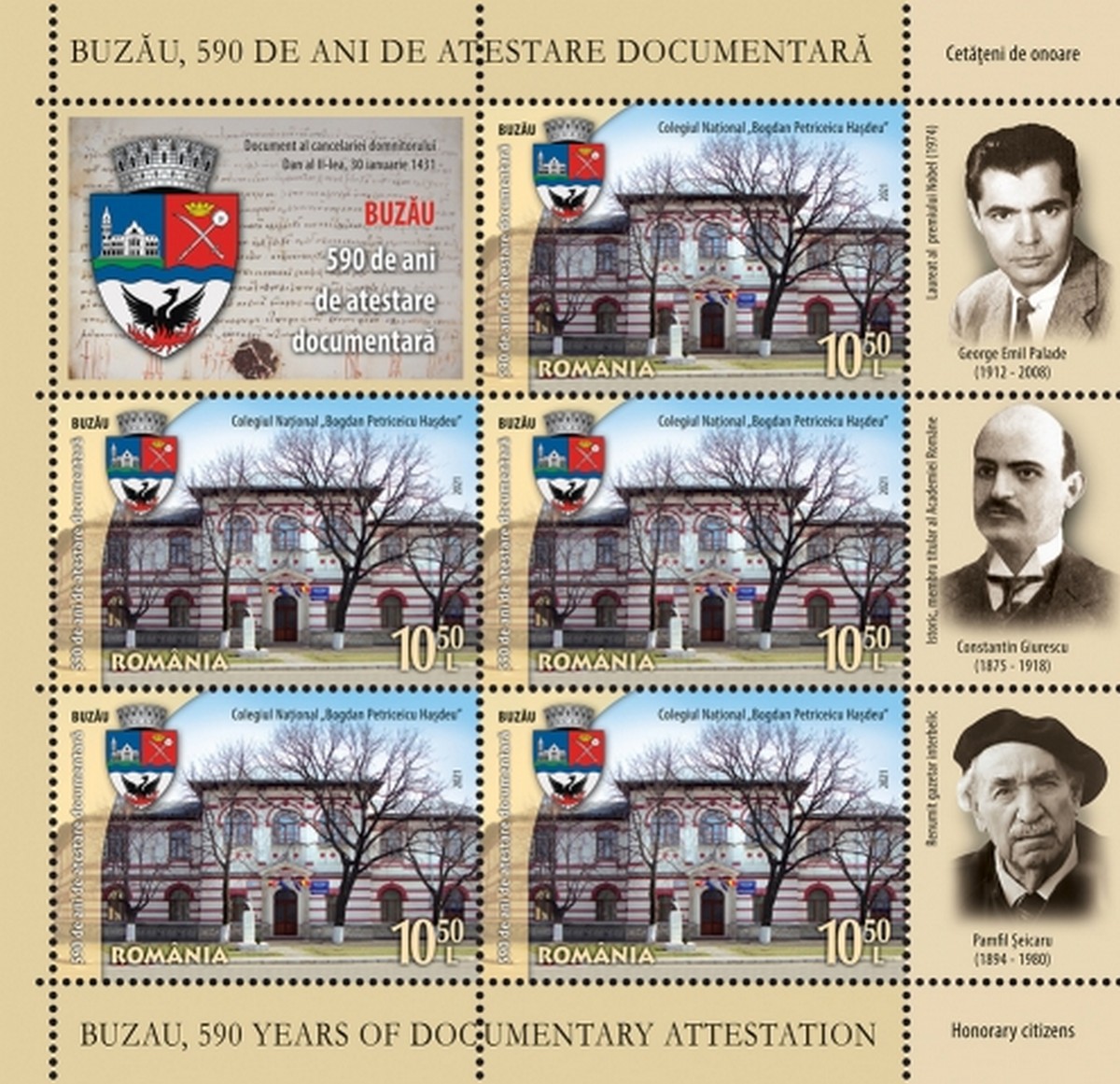 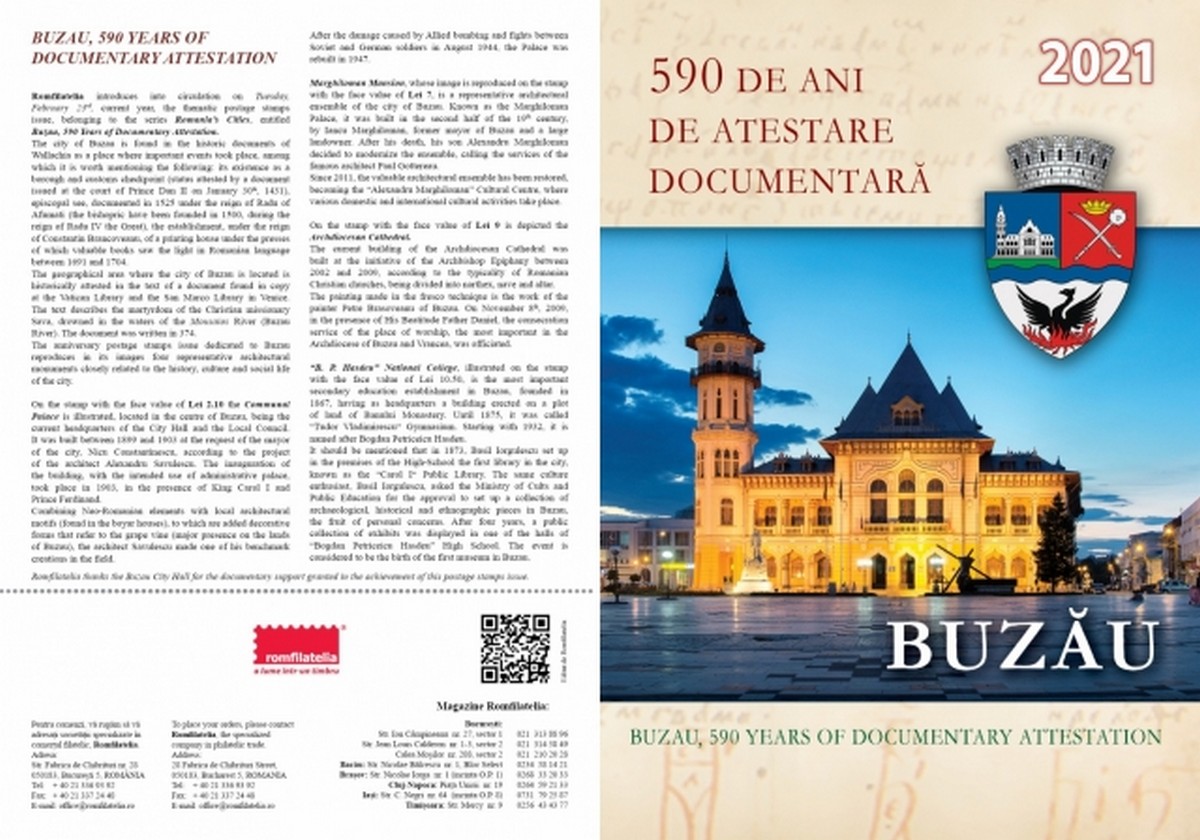 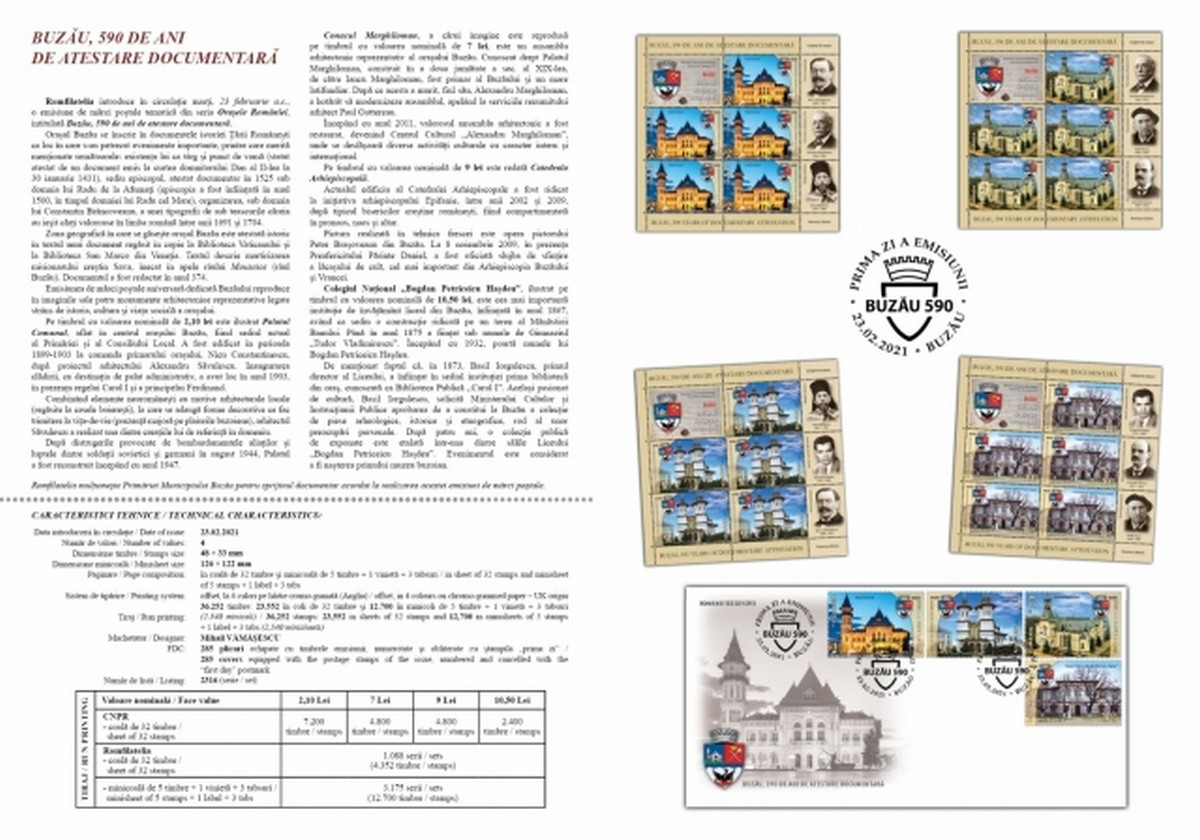 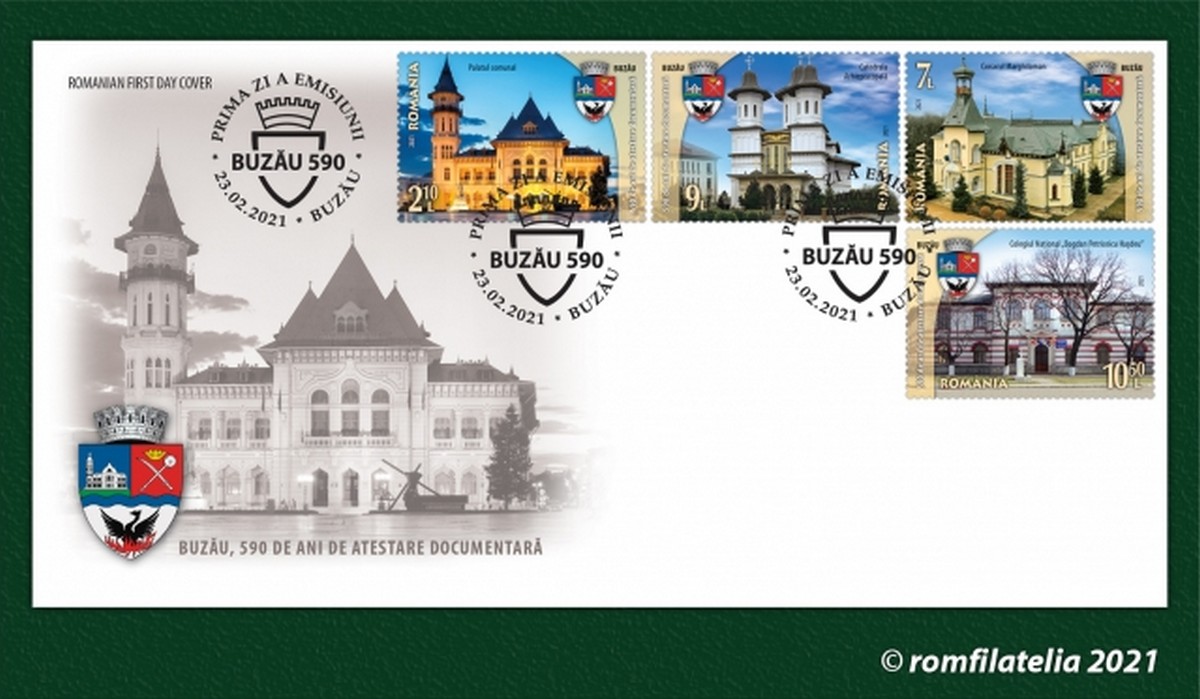 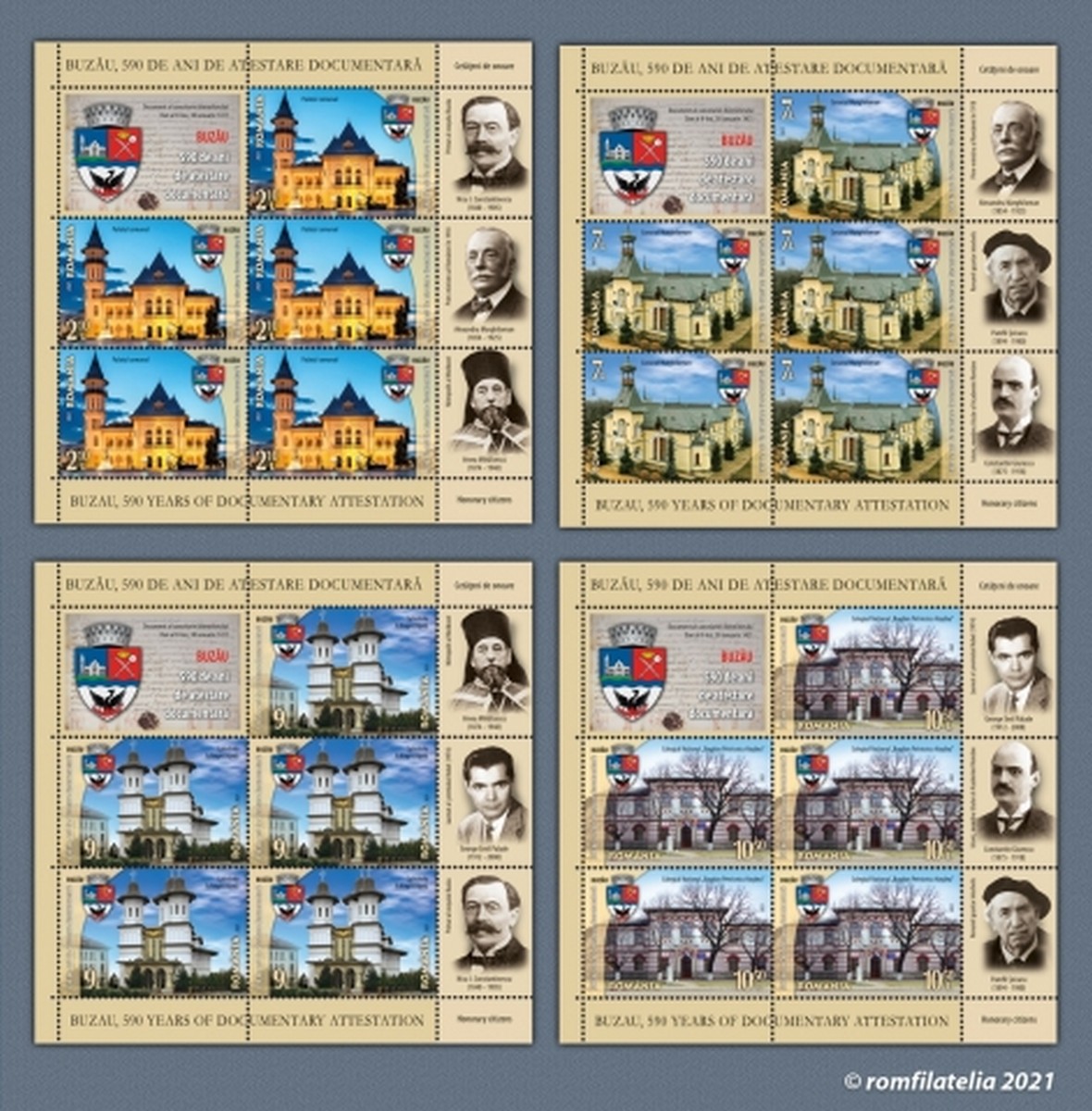 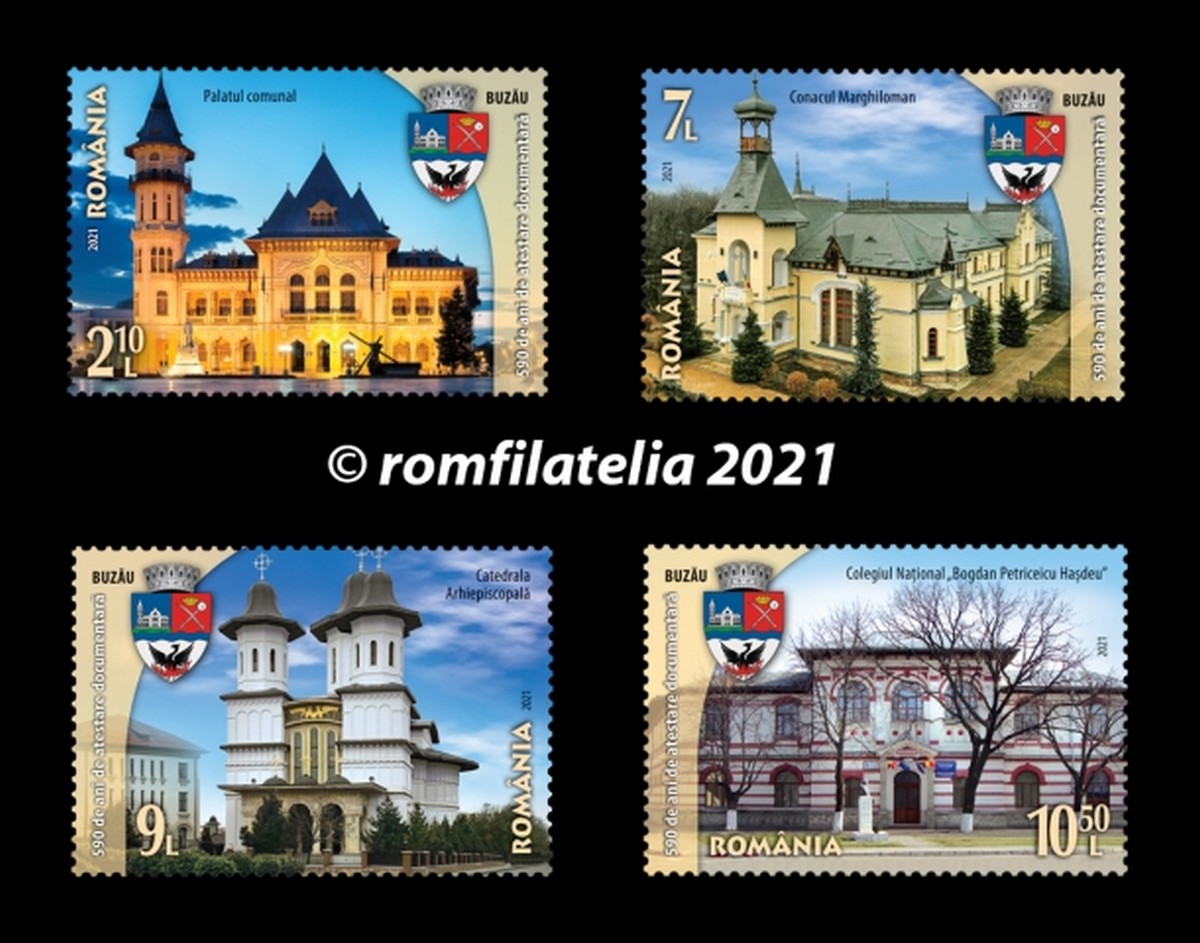 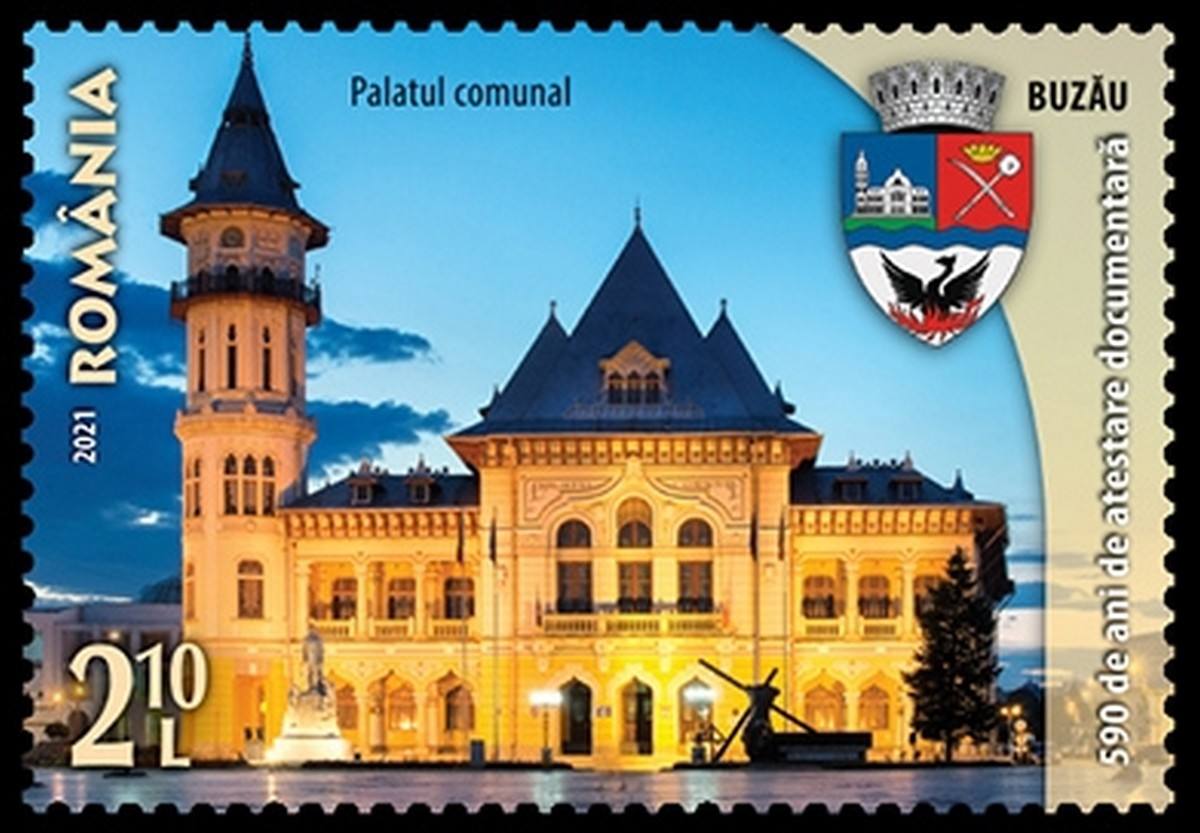 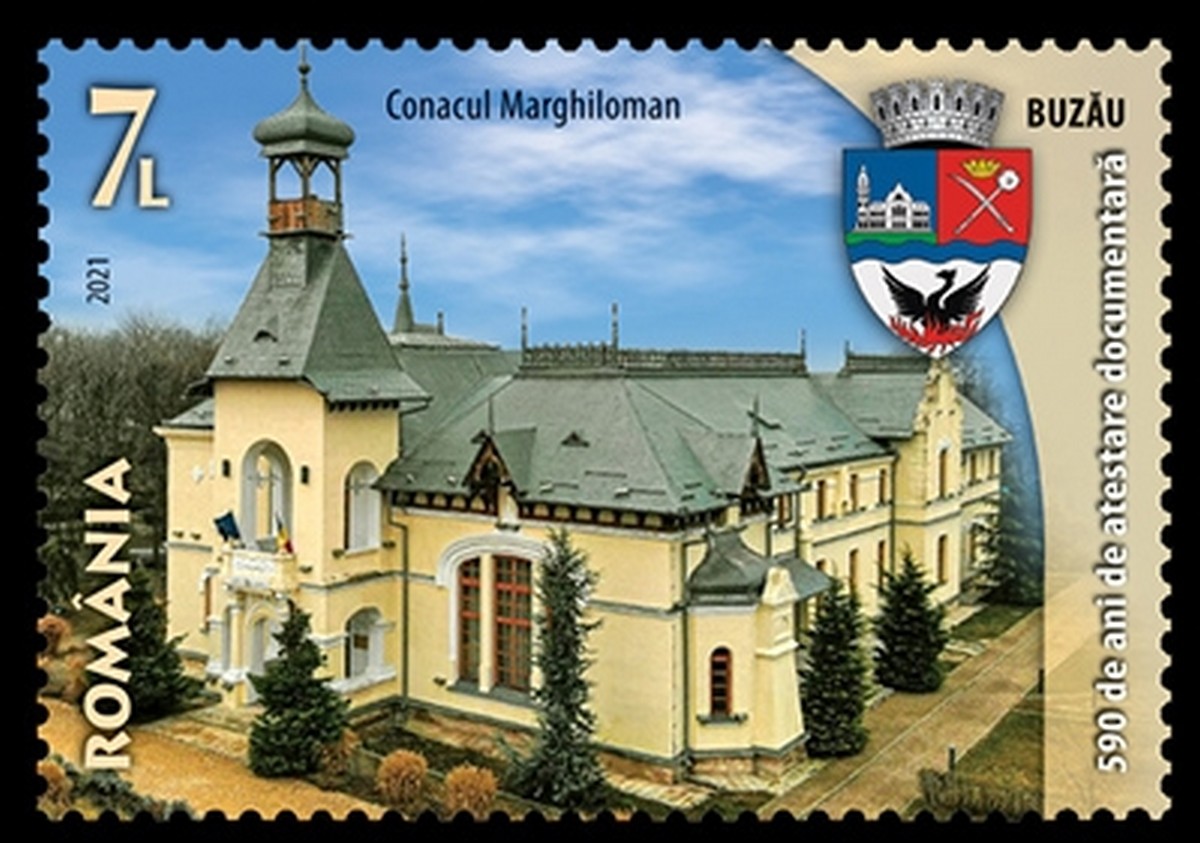 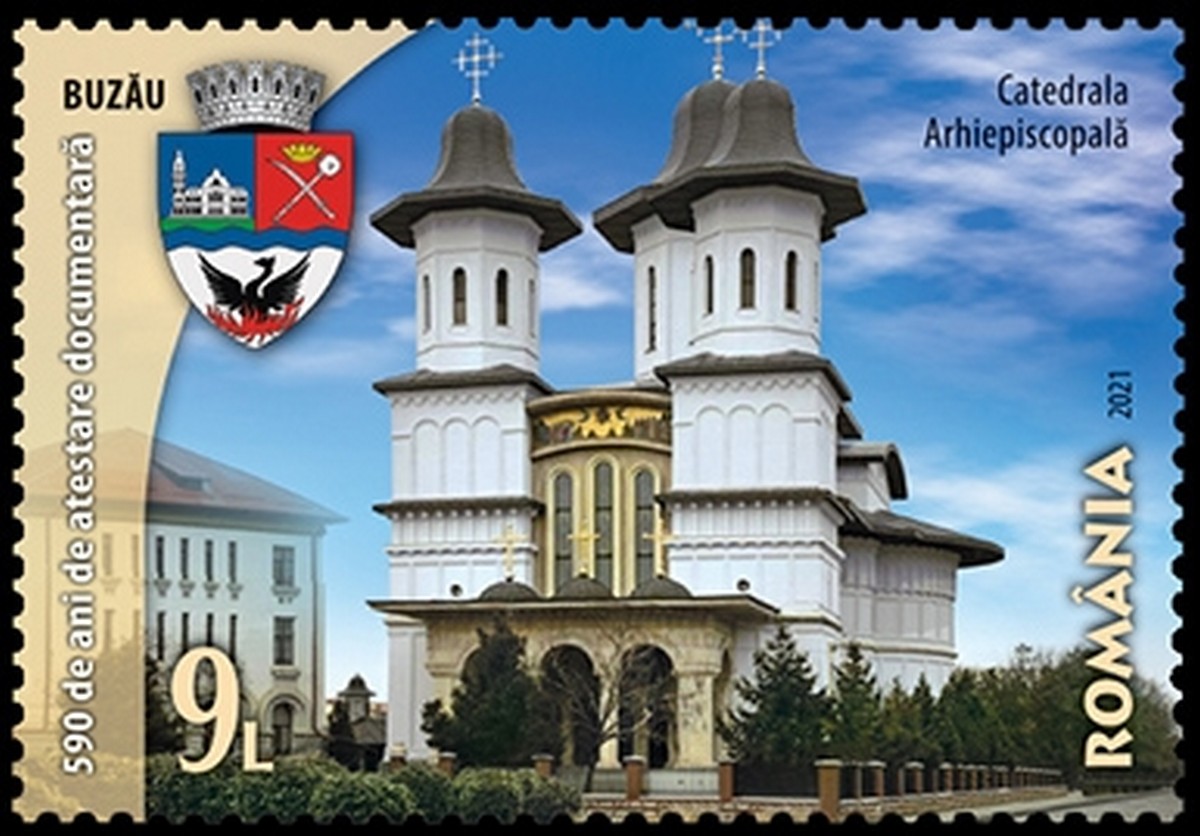 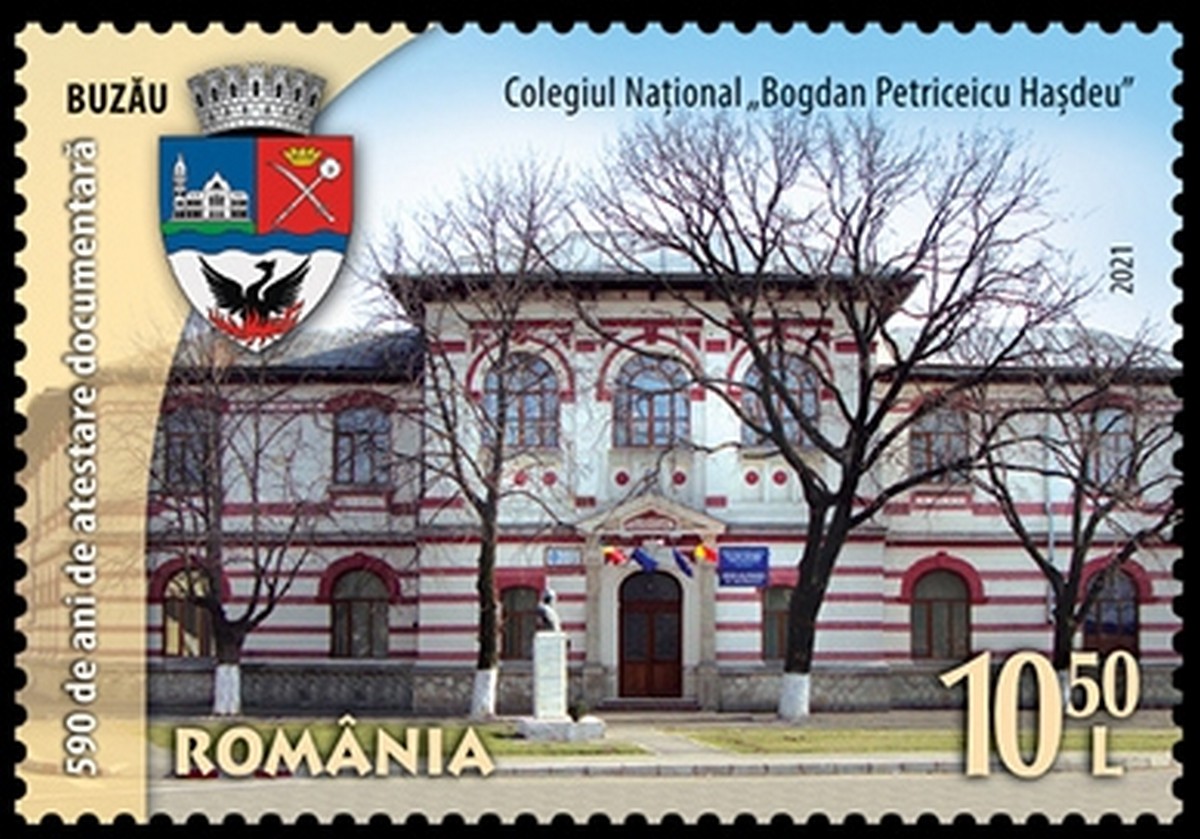