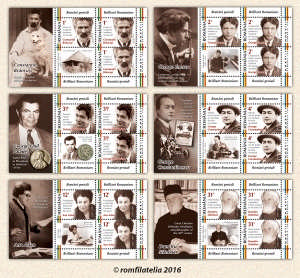 The greatest Romanian sculptor Constantin Brancusi was born in Hobita, Gorj County, in 1876 and died in Paris in 1957.

An adept of modern abstract sculpture, he definitively influenced and revolutionized this art in the 20th century.

Between 1903 and 1906 he was in Paris at the École des Beaux-Arts and exhibited his first works at the Salon of Arts in the French capital.

Prayer, Sleeping Muse and The kiss are considered works which mark the first stage in the evolution of the artist.

Brancusi’s international recognition comes quickly, and his works such as Bird in the air, Miss Pogany or Princess X become his passport to major sculpture exhibitions around the world.

George Enescu was born on August 19th, 1881 in Liveni, Botosani county (today George Enescu), and died on May 4th, 1955 in Paris. He was a composer, violinist, professor, pianist and conductor, a member of the Romanian Academy, in 1932. He is considered a complete musician gifted in multiple ways as a composer, performer and teacher (among his famous students being Yehudi Menuhin). In the last part of his life, his creations achieve a genuine originality and a unique style that manifests itself in his compositions: rhapsodies for orchestra, symphonies, sonatas for violin and piano, the opera Oedipus etc.

George Emil Palade was born in 1912, in Iasi, and passed away at the age of 96 years, in 2008. He is known as a scientist, specialist in cell biology. All of his research was held in the United States, where he was awarded numerous orders and prizes.

He received the Nobel Prize in Physiology or Medicine in 1974, along with Albert Claude and Christian de Duve for discoveries concerning the functional organization of the cell, that have been instrumental in the development of modern cell biology. He was elected an honorary member of the Romanian Academy in 1975.

George “Gogu” Constantinescu (born in 1881 in Craiova – deceased in 1965 in Coniston Water, UK), considered one of the greatest Romanian inventors of all time, was among the first to use reinforced concrete in buildings and construction of large-span bridges. Among the buildings and bridges built we mention: Patriarchal Palace, the Grand Mosque in Constanta, the Constanta Casino and bridges in Adjud, Racatau, Dolhasca, Lainici.

Gogu Constantinescu developed the Sonic Science, which aims to study the production, transmission and use of high mechanical power through alternative forces and longitudinal elastic vibrations of fluid media (especially liquids) and solids, with infrasound and ultrasound frequencies. He made the first hail cannon and built in World War I the most accurate synchronization system for firing a machine gun for planes, through the propeller blades. He is also the inventor of the automatic gearbox for cars and locomotives, with no clutch and no gear shift.

The first Institute of Gerontology and Geriatrics in the world was founded in Bucharest, in 1952, at the initiative and under the guidance of doctor and inventor Ana Aslan. Born in Braila in 1897, Ana Aslan later lived in Bucharest until the age of 91 years.

She created Gerovital and Aslavital, drugs used to prevent or slow age-related changes. Thanks to her research and inventions, Ana Aslan became a member of the Academy of Sciences of New York, the Board of the International Association of Gerontology, counselor in the World Health Organization and a member of the Romanian Academy. She received countless prizes and awards among which the “Leon Bernard” Prize given by the World Health Organization.

Political and artistic personalities of the time used Ana Aslan’s treatments and the Institute that currently bears her name has often been labeled as the “Crown Pearl” of the Romanian hospitals.

Dumitru Staniloae was born on November 16th, 1903 in Vladeni and died on October 5th, 1993 in Bucharest. He was a priest, theologian, professor, dogmatist, translator, writer and journalist. He is considered one of the prominent authorities of European and Romanian theology of the 20th century, and among the greatest Romanian theologians being recognized in the entire Christian Orthodox world through awards and accolades. He worked for 45 years on the translation of the “Philokalia” (in twelve volumes). He became a member of the Romanian Academy in 1991. 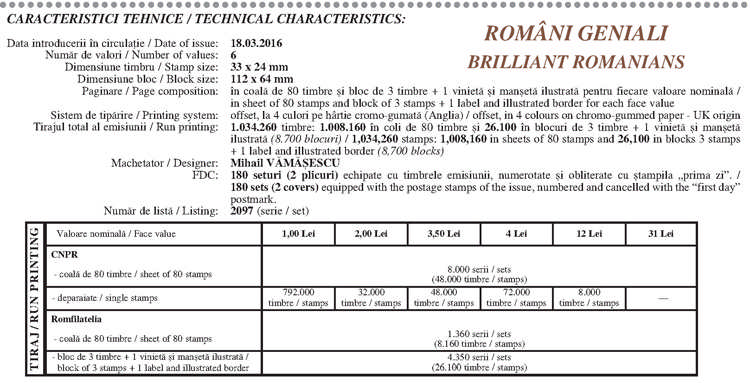