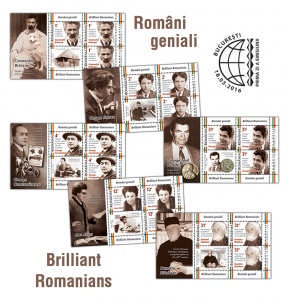 Over time, numerous Romanian personalities have dazzled with their talent, ingenuity and artistry, creating inventions which have changed the world history or reaching outstanding performances in their field work.

Often promoting human values of our country and their contribution in the society’s development, Romfilatelia introduces into circulation a postage stamp issue dedicated to distinguished Romanian personalities, entitled Brilliant Romanians. Thus, the six postage stamps of the issue present representatives of various domains, such as science, theology, medicine, engineering, sculpture and music, and can be purchased starting with Friday, March 18th, 2016, in Romfilatelia’s stores in Bucharest, Bacau, Brasov, Cluj-Napoca, Iasi and Timisoara.

The stamp with the face value of lei 1.00 presents the greatest Romanian sculptor, Constantin Brancusi. An adept of modern abstract sculpture, he irrevocably influenced and revolutionized this art in the 20th century. International recognition comes quickly for Brancusi, and his works such as Bird in the air, Miss Pogany or Princess X become his passport to major sculpture exhibitions around the world.

George Enescu, considered a complete musician, gifted in multiple ways as a composer, performer and teacher, is illustrated on the stamp with the face value of lei 2.00. He is also a violinist, pianist and conductor, his creations achieving, in the last part of his life, a genuine originality and authenticity manifested in his compositions: rhapsodies for orchestra, symphonies, sonatas for violin and piano etc.

George Emil Palade, known as a scientist, specialist in cell biology, is depicted on the postage stamp with the face value of lei 3.50. He received the Nobel Prize in Physiology and Medicine in 1974, along with Albert Claude and Christian de Duve, for discoveries concerning the functional organization of the cell, which have been instrumental in the development of modern cell biology.

On the stamp with the face value of lei 4.00 is illustrated George “Gogu” Constantinescu, considered one of the greatest Romanian inventors of all times. Among his accomplishments are the first hail cannon, the Sonic Science, the automatic gearbox for cars and locomotives etc. Also, he was among the first to use reinforced concrete in buildings and construction of large-span bridges (Patriarchal Palace, the Constanta Casino, the bridges in Adjud, Dolhasca etc.).

On the stamp with the face value of lei 12.00 is represented Ana Aslan, doctor and inventor, the founder of the first Institute of Gerontology and Geriatrics in the world, in Bucharest, in 1952. She created Gerovital and Aslavital, drugs used to prevent or slow age-related changes. Political and artistic personalities of the time used Ana Aslan’s treatments and the Institute that currently bears her name has often been labeled as the “Crown Pearl” of the Romanian hospitals.

Dumitru Staniloae, priest, theologian, professor, dogmatist, translator, writer and journalist, is illustrated on the stamp with the face value of lei 31.00. He is considered one of the prominent authorities of European and Romanian theology of the 20th century, and among the greatest Romanian theologians, being recognized in the entire Christian Orthodox world through awards and accolades.

The six postage stamps of the issue are completed by two first day covers, and as page composition were used the sheet of 80 stamps and the block of 3 stamps + 1 label and illustrated border.

Brilliant Romanians is a philatelic project which comes to anticipate the centenary of the Great Union of the Romanian Principalities, anniversary which will take place in 2018, under the concept Romania 100, Romfilatelia following to mark this important historical moment through its specific activity and thus contributing to promoting Romanian values internationally.