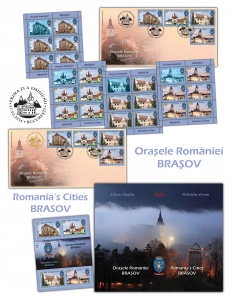 With a history starting in the 13th century, the city of Brasov has earned an unmatched reputation in the South East Europe due to its location, cultural and artistic life, and also its impressive architecture that combines specific features of several styles which have left their mark on the city in time. All these aspects make Brasov a destination that impresses with its beauty and picturesque places, attracting many visitors from around the world.

Coming as a continuation of what the city of Brasov stands for in terms of culture and architecture, Romfilatelia includes it in the postage stamp series Romania’s cities, thus dedicating it the latest philatelic project suggestively entitled Romania’s cities, Brasov. The postage stamp issue will be available for purchase starting from Wednesday, February 17th, 2016, in Romfilatelia’s shops in Bucharest, Bacau, Brasov, Cluj-Napoca, Iasi and Timisoara.

The four stamps of the issue reproduce representative monuments of the city, which are known for the historical and architectural importance they have in creating the city’s identity.

Having the face value of lei 3.00, the stamp illustrating the Black Church in Brasov presents the most important architectural monument in the city, and also the largest house of worship in Romania, with a length of approximately 90 meters and a height of the tower at the cross of 65 meters. Built between 1383 – 1477, the Black Church is the largest Gothic place of worship east of Vienna, receiving its name after the great fire of 1689. It is famous not only by its size, but also by its heritage: the largest collection of Oriental carpets in Europe, dating from the 15th and 16th centuries (except Turkey), the largest mobile bell (6 tons) and the largest mechanical organ in Romania (the Buchholz organ).

On the stamp with the face value of lei 3.30 is found Catherine’s Gate, one of the most representative monuments of the Transylvanian Renaissance style architecture. Until the first half of the 19th century, Catherine’s Gate was the only entrance to the Brasov fortress from Schei, the exterior tower being the only element of the fortified medieval gate preserved today.

The “First Romanian school” museum’s building preserved the Baroque style from the changes that have been made in the 1760s.

The Council Hall is illustrated on the stamp with the face value of lei 14.50. Medieval chronicles mention several changes in the Council Hall’s architecture and various purposes for its rooms. Destroyed by the great fire of 1689 and rebuilt in time, the Council Hall hosted the city administration until 1876. Currently, it houses the Brasov County History Museum, where over 3000 pieces present the historical identity of Brasov County from prehistoric times and antiquity to the present.

The four stamps of the issue Romania’s cities, Brasov are completed by a first day cover, and as page composition were used the sheet of 32 stamps, the minisheet of 5 stamps + 1 label and the block of 4 stamps (in philatelic album).

The special product of the issue is the philatelic album, created into a limited edition of 245 pcs. and equipped with the block of 4 postage stamps of the issue and the first day cover having the “first day” postmark clearly imprinted in foiling. Both products are numbered from 001 to 245.

Romfilatelia thanks the Brasov City Hall, the Brasov County History Museum, the First Romanian School Museum of Brasov and photographer George Avanu for the documentary support granted in the creation of this postage stamp issue.