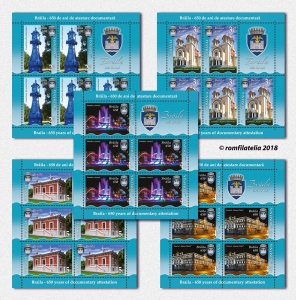 Romfilatelia introduces into circulation the postage stamp issue Braila, 650 years of documentary attestation, comprised of 5 stamps, each illustrating a representative monument of the city on the Danube.

In 2018, we celebrate 650 years since the first documentary attestation of the medieval city of Braila, on January 20th, 1368. Until the Ottoman conquest from 1538, the town grew into a very important commercial and crafts center of Wallachia. The Turks build a citadel that was integrated into Danube’s defense system. In 1828, the new Russian conquerors demolished the citadel and reshaped the city using modern urban planning. The city had a special charm, with all its public or private buildings, or with its varied places of worship, growing into an example of harmonious coexistence of different cultures and denominations.

The inhabitants of Braila are very proud of their rich local history, having difficulties in establishing a hierarchy of the many places of interest that contribute to the identity of their city. The tourists can visit, for example, the Baroque Clock, the “Nativity of Our Lord” Cathedral, the Kinetic Fountain, the “Maria Filloti” Theatre, or the “Panait Istrati” Memorial House.

On the stamp with the face value of Lei 2.20 is depicted the Baroque Clock, which is situated in the old town. It is a remarkable
monument, the work of Carol Sakar, and was erected in 1909.
Made from cast and welded metal, this piece was used for park decoration. At the Public Clock’s base, an inscription on metal plates that reads “Carol Sakar; Praga-Karkin; Bohemia-Austria” was placed, together with a painted ship, the symbol of Danube, the river that borders the city.

The “Nativity of Our Lord” Cathedral illustrates the stamp with the face value of Lei 3.50. Its building began on April 16th, 1990, the second day of Eastertide. The plan of the cathedral has the Byzantine layout of a cross with uneven arms, and two choirs. The edifice is 42 meters long, and has a total height of 50 meters, as measured from the ground level to the ridge of the big spire’s helm, and is provided with five bells, electrically controlled. The impressive building dominates the Southern sides of the city. The cathedral features elements of traditional architecture, which has been nevertheless adjusted to respect current building regulations.

The Kinetic Fountain is displayed on the stamp with the face value of Lei 4. Located near the Administrative Palace, it is the work of Constantin Lucaci, a sculptor often compared to Brancusi, and renowned for his steel sculptures. The monument brings forward two moving hands that unite in a hollow. The bright vibrations, the movements and the sonorousness join in an exquisite show, forming a unitary whole. The kinetic fountain is made from perfectly grinded inoxidable steel, and was cast at Factory Progresul Braila, being inaugurated in 1989.

Theatre “Maria Filotti” of Braila, a prestigious institution of the Romanian culture, which was built around 1850, is presented on the stamp with the face value of Lei 4.50. A remarkable monument of architecture, the building was included on Romania’s National Heritage List. The construction contains several show halls, a conference room, foyers, etc. In 1969, the theatre was named after the renowned actress Maria Filotti. The theatre hosts the international festival “Days and Nights of European Theater”, as well as the International Canto Contest “Hariclea Darclee”.

The stamp with the face value of Lei 15 illustrates the “Panait Istrati” Memorial House, which belongs to the patrimony of the “Carol I” Museum of Braila. The house was built in neo-Romanian style at the beginning of the 20th century, and belonged to the city’s Public Garden. Panait Istrati never lived in this building. In 1984, a memorial exhibition to celebrate the centenary of the writer’s birth was organized in this house, many manuscripts and personal objects being subsequently acquired.

Romfilatelia thanks Braila Municipality, the “Carol I” Museum of Braila and the Philatelic Association “Dunarea Braila” for the documentary support provided for the creation of this postage stamp issue, and the photographer George Avanu. 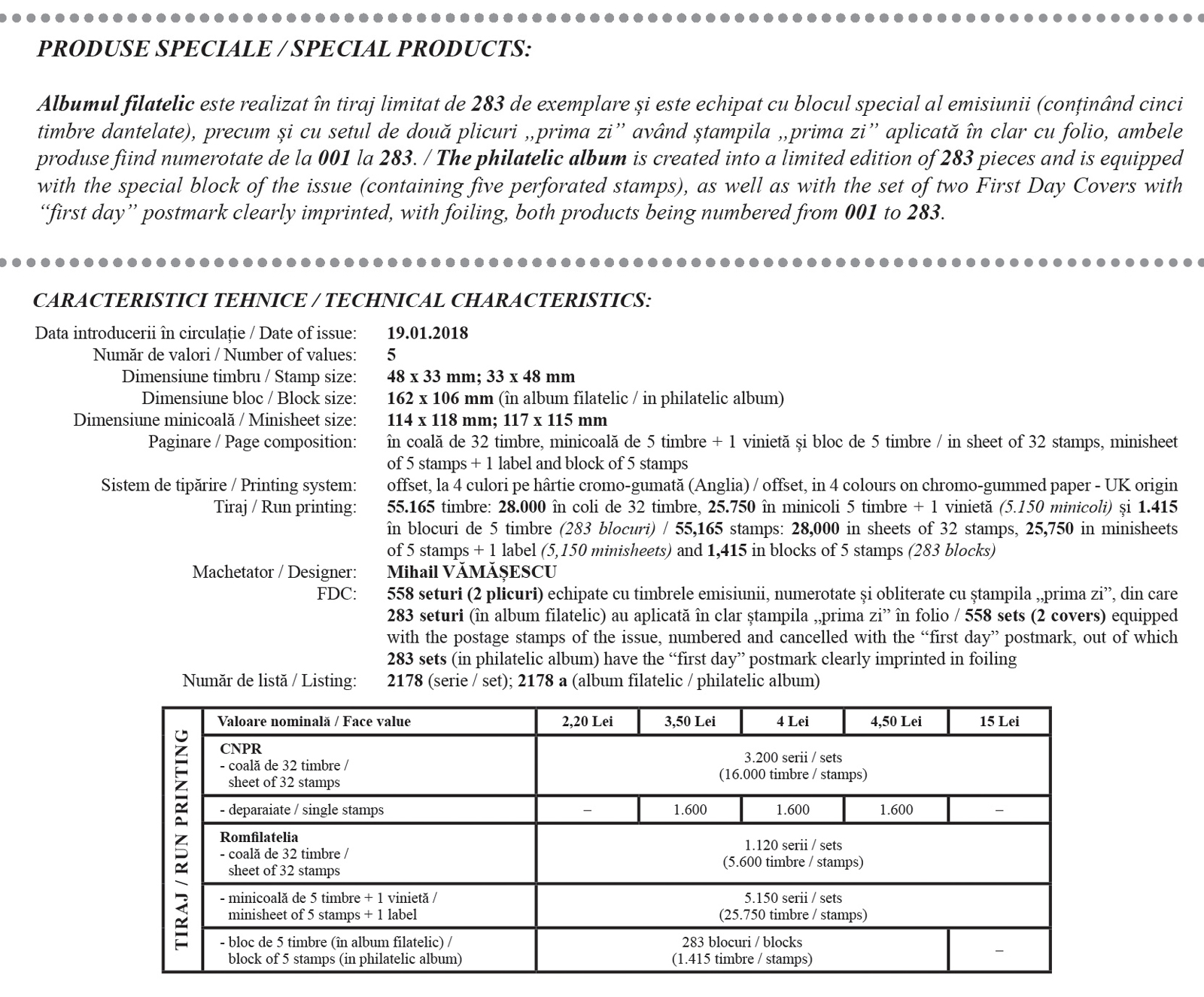