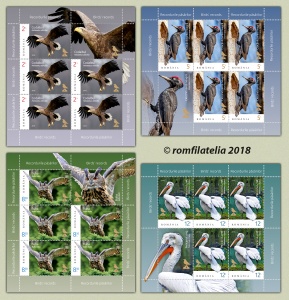 The White-Tailed Eagle (Haliaeetus albicilla), illustrated on the stamp with the face value of Lei 2, is the biggest bird of prey in Europe, characteristic of the open regions of the sea coast and the freshwater lakes.

In Romania, the species is endangered, being spread predominantly in the Danube region and the Danube Delta.

It is a sizable bird, of the size of a turkey (80-100 cm), with a weight of 4.10 kg, the male and 5.50 kg, the female. The wingspan ranges between 190-240 cm. Adults have a similar look, the beak and the iris are yellow, the tail is white and the body is brown. Young specimens have dark colour beak, iris, tail and body. They reach the characteristic plumage of the adult in 5-6 years, and the tail becomes completely white only after eight years. The species is a monogamous and tends to keep its mate for the entire life. It nestles in trees near the water, alternately using 2-3 nests, using the same territory. It feeds on fish, water birds, small mammals and sometimes lice.

The Black Woodpecker (Dryocopus martius), illustrated on the stamp with the face value of Lei 5, is the biggest woodpecker in Europe, with dimensions close to those of a crow.

In Romania, it is found in coniferous, broadleaf and mixed forests in the Carpathians, sometimes also in the plain forests, especially in Wallachia.

The female has the red spot in the back of the head, while the male has the entire crown of red colour. The plumage is black. It feeds on insects and their larvae under the bark of the trees.

It is considered a key species in forested areas, providing nesting spaces for many species of birds and mammals. Also, by controlling the insect populations beneath the bark, it protects the trees. It often beats the bum and the knocks, during the nesting season even several hundred times a day.

It feeds on mammals, ranging from those of the size of an adult rabbit, birds up to the size of herons and buzzards, frogs, snakes, fish and insects. It also attacks by surprise larger mammals such as foxes or baby deer, weighing up to 17 kg. 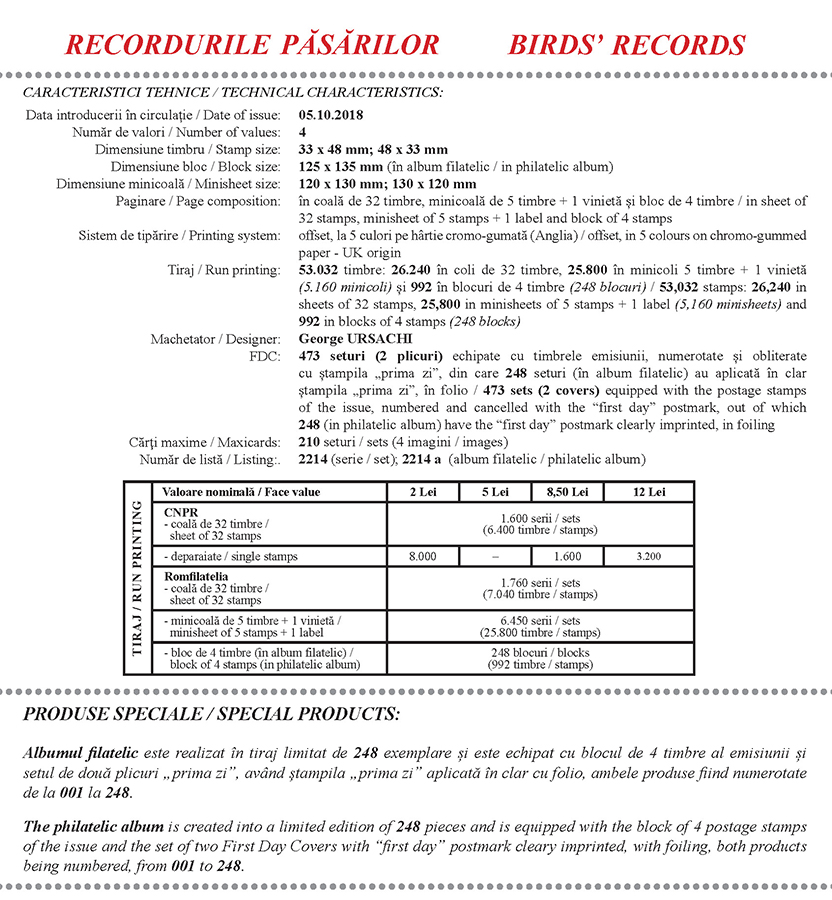