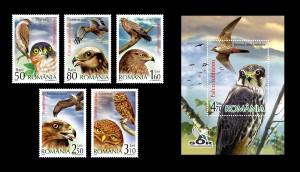 On the stamps of the issue, the following birds of prey are illustrated:
– the Sparrow Hawk (Accipiter nisus) – on the stamp with the face value of RON 0.50. It is a rare species of brooding bird, and in our country it is often encountered in winter time and in the migration period, when Nordic exemplars also visit our country. The adults have a grey feathering back, unlike the young ones which have a brown one. On the chest, the male hawk has transversal red stripes, whereas the female has grey ones. It nests in low areas, seldom in the mountains. The eggs, 3-5, are whitish, with brown spots and are laid in May. The hatching, which lasts approximately a month, is generally made by the female.
– the Marsh Harrier (Circus aeruginosus) – on the stamp with the face value of RON 0.80. It is usually encountered in the Danube Delta and around marshes. The male harrier has red feathers and the wings and tail are grey. The female is brown, except for the head and wing edges which are beige. The nesting, generally made by the female, lasts approximately 33 days. The 4-5 eggs, whitish-bluish, are laid at the end of April. In wintertime they migrate in Central Africa. In our country, in gentle winters, Nordic exemplars can also be found.
– the Lesser Spotted Eagle (Aquila pomarina) – on the stamp with the face value of RON 1.60. It is smaller than eagle. The typical position for the flying spotted eagles is with open wings and tips slightly bent down. It has large wings and a generally brown color palette.  They nest in forests with far-stretching areas.
– the Buzzard (Buteo buteo) – on the stamp with the face value of RON 2.50. It is a species commonly encountered in forests, frequently found on agricultural lands and swamps. It flies with slow wing beats and flies over the ground with wide rotations in order to closely observe the area. It uses tall objects as observation points. Is one of the species with variable feathering, from dark brown to yellowish-white, with a light color stripe on the chest as a characteristic. They feed with mice, snakes, etc.. The female as well as the male hatch, the incubation period being no more than
30 days.
– the Owlet (Athene noctua) – on the stamp with the face value of RON 3.10. Is one of the most common night birds of prey, found in open regions, often rocky and in the vicinity of localities. It nests in tree hollows, on rocks and on building bridges. It feeds itself with rodents, birds and insects. It has a stuffed body, wide head with frontal eyes and long legs. The feathering is light brown on the inferior part, the back and the wings are brown with white spots. In April is lays 5-7 and sometimes 9 eggs, which are hatched by the female for 28 days.

On the souvenir sheet of the philatelic issue, with the face value of RON 4.70, is illustrated the Eurasian Hobby (Falco subbuteo). It is a small size predator. It lives in low, open areas with tree bunches, near humid areas. It hunts extremely fast and agile, especially swallows but also other birds as well as insects. The color palette of its back is grey or brown, the lower part being lighter. In our country it is encountered only in summertime.

The philatelic issue has been made with the support of
the Romanian Ornithological Society (SOR) whose logo is reproduced on the perforated souvenir sheet and on the TABS of the stamp sheets. 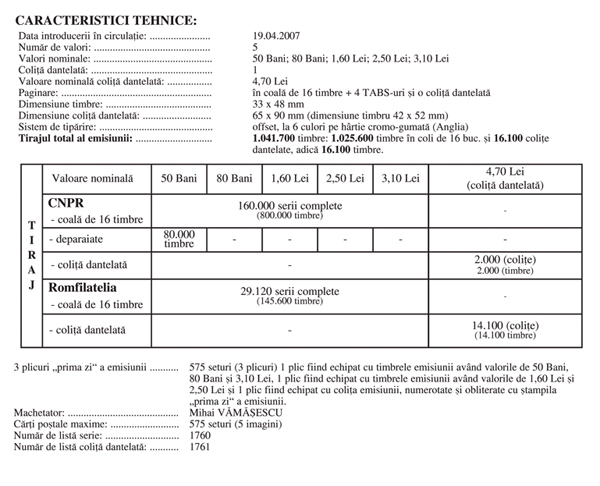