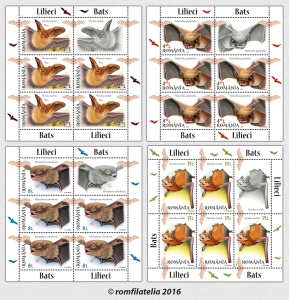 Bats are mammals of the order Chiroptera (its name comes from the Greek words cheir, “hand” and pteron, “wing”) whose hands form wings, making them the only mammals naturally capable of true and sustained flight. Resuming its series of projects dedicated to this theme, Romfilatelia introduces into circulation the postage stamp issue Bats.

Western culture associates many myths with these mammals, some partly true, others only rooted in superstition.

A first myth is that bats are flying mice, but they are not related to the rodent family, being a separate order. Their closest relatives are lemurs and primates.

Regarded in Western culture as messengers of evil and dirty creatures by nature, bats are actually capable of altruism, helping colony members who were not able to hunt with food. They also spend much of their resting time by cleaning their fur, like cats do, to ensure their health and that of the entire colony.

It is a medium size species, and as the name suggests it, has large ears compared to the size of its body. The fur in its back is light brown, brown or reddish-brown; on its sides it is lighter, ­generally yellow-brown.

The presence of this species is associated with mature forests, mainly deciduous ones, being also present in mixed forests or in the mountainous areas in coniferous forest. In summer it takes shelter mainly in tree hollows or buildings.

Pipistrellus pipistrellus (the common pipistrelle) is illustrated on the stamp with the face value of Lei 4.50.

Very small size species, its fur is dark brown on its back, often rust colored, sometimes of a light, pale brown. The ears and snout are of a blackish color, but some adults show a lighter area around the eyes. The face and ears differ clearly from the fur’s aspect, by its dark color.

It is a very widespread species and frequently encountered, adapting well to the anthropic environment. In summer, colonies can be found in the hollows of trees, under tree bark, in buildings, attics and cracks in the walls. They hibernate in the attics or basements of buildings, cracks in walls, natural and artificial underground shelters.

Miniopterus schreibersii (the common bent-wing bat) is illustrated on the stamp with the face value of Lei 8.

A medium sized species, with a very short snout and a bulging, its ears are short and triangular, and do not overextend beyond the top of the head. The wings are very long and narrow. The fur on its back is grayish-brown, sometimes brown or blackish. Colonies take refuge, usually, in caves throughout the year, but rarer in mines and other subterranean shelters. It prefers caves with large entrances from karst regions in hill or mountainous areas. Solitary specimens or in small groups may be found in a variety of shelters, in buildings, in the structure of attics. It prefers wooded areas.

Nyctalus noctula (the common noctule) is illustrated on the stamp with the face value of Lei 15.

A large size species, the common noctule has a silky fur, made up of short red-brown hairs, lighter in its sides. It takes shelter in tree hollows, preffering the ones created by woodpeckers, ­situates at heights between and 4 and 12 m. It is well adapted to the urban environment, appearing even in larger cities, where their favourite shelters are the cracks in building walls. It is easy to identify, being a large size species which hunts ar considerable heights (usually 10-50 m).

Romfilatelia thanks the Romanian Bat Protection Association for the documentary support granted in the creation of this philatelic issue. 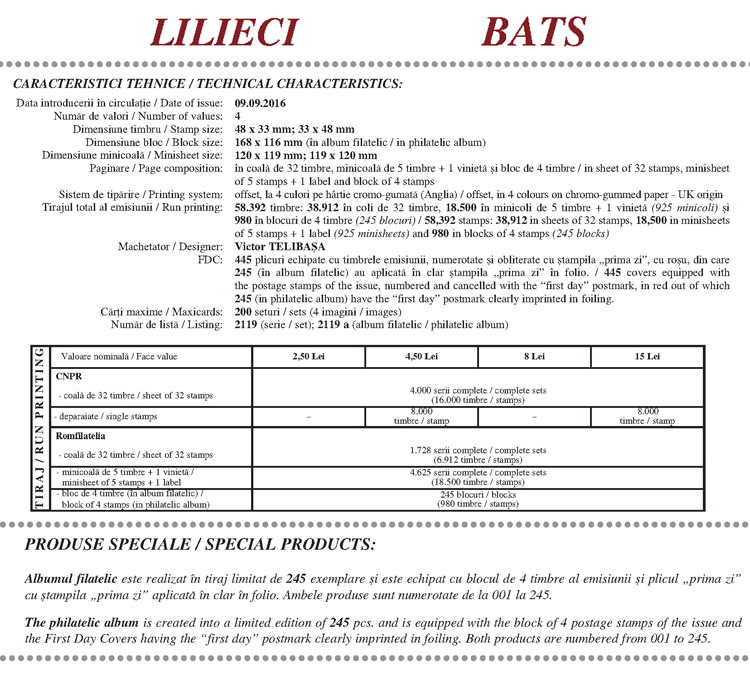