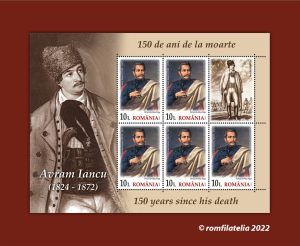 On the occasion of the 150th anniversary of the passing to eternity of the most beloved son of Transylvania, “The Prince of the Mountains” (in Romanian, “Crăişorul munţilor”), Avram Iancu, Romfilatelia introduces into circulation on Tuesday, September 6 of this year a commemorative issue with the generic title Avram Iancu, 150 years since his death, consisting of a postage stamp and a perforated souvenir sheet, which have the face values of Lei 10 and Lei 32. The portraits reproduced on the postage stamps depict the paintings belonging to the authors Mișu Popp and Barbu Iscovescu. The graphic next to the postmark of the perforated souvenir sheet reproduces a suggestive drawing for a speech of Avram Iancu in front of the Transylvanian patriots prepared for a combat action.

The First Day Cover of the issue, thematically illustrates the portrait of the National Hero of the Romanians on the faded background of the drawing also presented in the graphics of the philatelic souvenir sheet.

Born in Vidra de Sus, in the legendary land of the Apuseni Mountains, the ones sprinkled with gold that gives birth to passions and hopes, Avram Iancu represents a symbol of two meanings: the first, the local meaning, since the revolution he started concerns the fate of the Transylvanian brothers, and the second, national meaning, given that his deeds are incorporated into the consciousness of integral Romanianism. This second meaning exceeds the intention of our hero, who only wanted to be a Transylvanian revolutionary, but the will of freedom of the entire people is found in him, he is claimed and revered as an emblem of Romanian history and nation.

Living in a European Union, the Romanians of today must know that more than a century and a half ago the “The Prince of the Mountains” (in Romanian, “Crăișorul munților”) thought and acted in a well-defined European spirit. Iancu writes: “Hungarian brothers, God let us settled in the same homeland, which together we may persevere in cultivating it, together we may taste the sweetness of its fruits. If you have a God in heaven, take other methods of dealing with us, but do not delay… the spirit with which Europe is pierced runs with a more elastic impulse to our soul than to any nation. Liberty, equality, fraternity, these principles are our motto”.

Avram Iancu was made of the tough essence fibre from which Romania’s illustrious personalities were moulded. He was known as a character who charmed the crowds, increasing thousandfold the thought that he embodied the great hope of liberation of a nation held for centuries in humiliation and slavery.

He is the one who inoculated in the soul of Transylvania the consciousness of masters from the royal race that once shone in the proud kingdom of Dacia.

Nowhere is the memory of Iancu more vivid, stronger than in the Apuseni Mountains, where one still feels a state of vigilance, an unconditional faith that defines Vidra as an Olympus, and Țebea (the place of eternal rest of the Prince) an altar. After feeling the futility of his struggle, with his mind darkened by great hopelessness, for 20 years he walked from place to place, crying the pain and injustice done to his people, until he died on the night of September 10 to 11, 1872, in the house of the baker Ion Stupină from Baia de Criș and was buried in the Țebea cemetery, in the vicinity of Horea’s gorun, on September 13. In 1924, at the commemoration of a century since the birth of Avram Iancu, King Ferdinand brought the bones of 73 heroes, fallen in the First World War, to the Pantheon in Țebea. Academician Ioan Aurel Pop, president of the Romanian Academy, defines with great respect the personality of the Hero of the Romanian Nation: “… he represents our destiny as Romanians and includes in a short human life the entire life of the Romanian nation, he remains the model that endures through the ages, representing the patriotic dimension of the Romanian people”.

Romfilatelia thanks the Romanian Academy Library, the National History Museum of Romania, the National Museum of the Union in Alba Iulia, and Mr. Daniel Iancu PhD., scientific researcher within the Museum of Dacian and Roman Civillisation in Deva, for the documentary and photographic support provided for the development of this postage stamps issue. 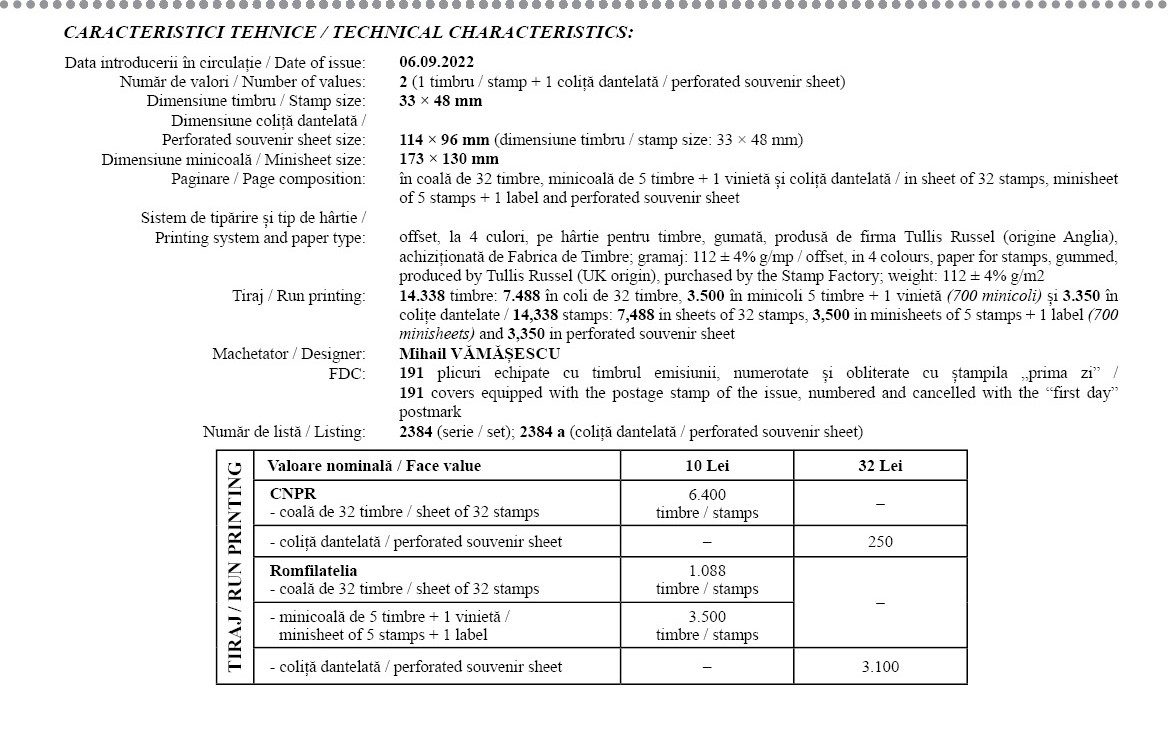