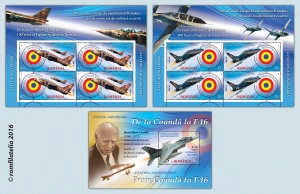 Romanians are a people proud of their past in aeronautics. Ever since the first appearance of airplanes, among the pioneers of the world there were Romanians who have contributed greatly to the development of flight by means heavier than air. Romfilatelia dedicates a new postage stamp issue to the anniversaries of this year, suggestively entitled Aviation, Anniversaries; From Coanda to F-16.

Among the pioneers is Henri Coanda, the father of jet aircraft and discoverer of the effect which bears his name. The day of June 7th, 2016 marked 130 years since his birth.  Naturally, the Romanian army was among the first in the world to own aircrafts. Thus, between 1910 and 1911, aviation was put to the test during large scale military exercises and, because it has proven viable, on April 1st, 1912, the Military School of Flight was established at Cotroceni, the first structure of its kind in our army.  Shortly after Romania entered World War I, the first Romanian fighter squadron was founded, an event from which we celebrated 100 years in 2016.  On board Nieuport XI aircraft, Romanian aviators participated in numerous dogfights and demonstrated great value especially during confrontations at Marasti, Marasesti and Oituz (the summer of 1917).  In the interwar period, a new generation of elite aviators proved themselves, true virtuosos of control stick, able to provide unforgettable moments during air shows of the era; their names became known on both sides of the Atlantic.  In the Second World War, Romanian fighter pilots have faced the strongest world aviation powers: the Soviets, the North American, the British and the German. From the Prut up to the Volga rivers, and from the Carpathian Mountains to the Tatras, flying at the controls of IAR-80 or Messerschmitt 109 aircraft, our pilots have fulfilled with honour and sacrifice the missions entrusted to them.  After the Second World War, classic fighter planes were gradually replaced with jet airplanes.  65 years ago, on June 26th, 1951, at the Ianca airfield, Major Aurel Raican became the first Romanian to take off aboard a combat jet airplane. Barely three months later, on September 15th, jet aviation entered the permanent combat service.  Thus, in 1951-1952, the subsonic jet airplanes (Yak-23 and MiG-15) entered the military aviation’s endowment, and in the mid-50s the first airplanes with onboard radar appeared. And the supersonic aircrafts (MiG-19 and MiG-21) entered the military aviation’s equipment between 1958 and 1962.  Later, in the last decade of communism, MiG-23 and MiG-29 fighters were imported.  It should also be noted that aircrafts produced within the country were also included in the endowment of the military aviation. Among them are IAR-93 and IAR-99 jets.  IAR-93 is a twin-engine subsonic jet, designed for fighter-bomber missions, created in cooperation with former Yugoslavia. The prototype first flew on October 31st, 1974, having Lieutenant Colonel Gheorghe Stanica as pilot. This aircraft was found in the endowment of the Romanian military aviation until 1998.

IAR-99 is a single-engine subsonic jet, for school and advanced training. It was entirely developed in Romania. The prototype made its first flight on December 21st, 1985, under the pilot Lieutenant Colonel Stefanel Vagner. In 1996 the process of modernizing it to be compatible with MiG-21 “LanceR” was started.

Currently, the Romanian military aviation is entering a new phase, with the entry of F-16 into its endowment. This is a multi-purpose supersonic aircraft (designed to combat airborne targets, bring support for ground troops and aerial reconnaissance). Equipped with highly advanced weapons, it was built in over 4,500 units and is serving 26 states. 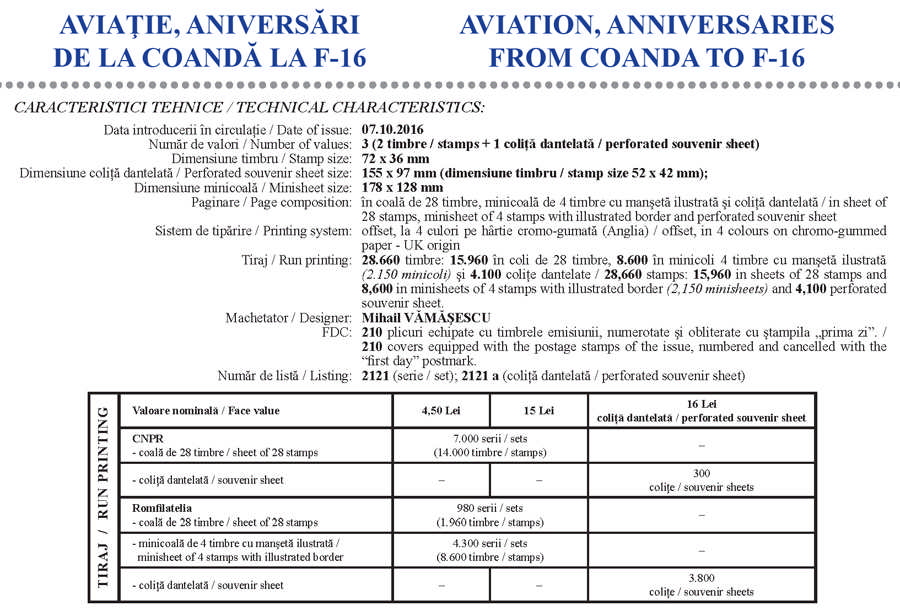