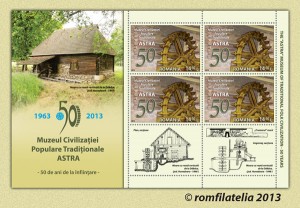 More than one century and a half ago (1861), in Sibiu, the Transylvanian Association for Romanian Literature and Culture of the Romanians – ASTRA is founded, a cultural organization contemplating, through its Founding Acts, to carry out preservation actions of the Romanian traditional heritage and artistic-cultural manifestations.

An open air museum had been envisaged to be built inSibiuever since 1940 by Romulus Vuia, the manager of the Ethnographic Museum of Transylvania, but his project became reality only in 1963, from Cornel Irimie’s initiative.

After the land being allocated to the museum (1960), the open air exhibition started to take shape. The specialists of the Department of ethnography and folk art within the Brukenthal Museum Complex designed the Thematic project for the organization of the open air Museum and established the subsequent phases for its development. The specialists and representatives of the Romanian Academy debated the thematic plan and profile of the future museum which would be called the Museum of Folk Technology.

On 6th May 1962, the Presidium of theRomanianAcademyapproved the theme of the future museum. It would represent occupations, crafts and “folk technical installations” from the whole country grouped by the diversity of the traditional processes, sorts and typologies.

As of 1963, the scientific research run by the museum’s specialists was carried out through “expeditions” for the onsite identification of the ethnographic monuments, having a documentary-historical or technical value, that were going to be transferred to Dumbrava Sibiului. Thus, the following were identified: the power saw of Gura Raului, Dabaca mill, the oil mill of Orastioara and the cloth fulling mill of Rod. In 1963 they also purchased the first nine monuments: the floating mill of Lucacesti, Dabaca mill, the oil mill of Orastioara, the power saw of Gura Raului, the cloth fulling mill of Rod, the manual mill of Bumbuiesti, the oil press of Racovita, the oil and cloth fulling mill of Talmacel and the floating bridge of Porcesti (Turnu Rosu). During 1963-1964, the first monument transferred into the museum was restored: Dabaca mill, from the region of Padurenii Hunedoarei, a monument of high ethnographic value dating back to 1848.

In the first phase of the museum’s development (1963-1967), the focus was on the identification and transfer of folk industry installations, which were the monuments most severely threatened with destruction and disappearance (mills, fulling mills, oil mills, hammer or screw oil presses, power saws etc.). They also built the press for marc of grapes from Sebes, the mill of Munteni, the small wheel power saw of Gura Raului, the whirlpool cloth fulling mill of Rod, the oil mill of Grind (in 1964), the well bucket mill of Arcani, the wine press of Racovita, the bridge keeper’s house of Porcesti (Turnu Rosu) and the floating mill of Lucacesti (in 1965).

As of 17th October 1967, theMuseumofFolk Technologywas open for the general public.

From 2000 until now, constructions coming from all the regions of the country have been transferred and rebuilt in the open air Museum: peasant households, folk technique installations, public utility edifices, complexes of peasant industries and religious edifices etc. which completed the 6 sectors and 18 thematic groups and subgroups, developing the largest open air monumental exhibition in Europe.

On the 50th anniversary of the establishment of ASTRA Museum of Traditional Folk Civilization, Romfilatelia introduces into circulation the anniversary postage stamps issue dedicated to the celebration of this event. The stamp with the face value of lei 14.50 reproduces the first monument rebuilt in the Museum: the Roman type mill (driving gear) and lower intake from Dabaca, Hunedoara county, dating back to 1848, according to the inscription on the head piece of the bridle.

The construction is laid on a stone foundation, has walls made of oak beams and the double ridged roof covered by shingle. The construction has two chambers: the mill and the dwelling room. The grinding installation is made of a pair of stones of 102 cm in diameter moved by a wing hydraulic wheel driven by the water jet at the lower part. The movement is transmitted through a system made of cog-wheel and roller (connecting rod) transforming the rotation of the horizontal axis into a vertically rotating movement of the stone axes. The installation is sustained by a massive oak beam made of four beams (talponi), four jambs (usciori) and a head piece of the bridle (fruntariu). On the two front jambs and the head piece of the bridle there is a sculpted decoration, dating back to 1848, as well as the Cyrillic inscription: 1848 Patru a Barbului…(illegible) Dumitru a Barbului built the mill with Kostandin.

We thank the ASTRA National Museum Complex of Sibiu for the support granted in the accomplishment of this postage stamps issue.